“Class”, said Miss Bliss, “Mary has something to tell us all today.”

Everyone looked at Mary, who stood up, blushing with pride. “My dad,” she began, “has won.”

“Won what?” somebody asked.

“The lottery, of course,” Mary said impatiently. “Will you just listen?”

“The lottery?” Everyone gasped in wonder. They all knew which lottery, of course. The news had been full of it all week. “You mean your dad –“

“Yes, he’s going to be on the firing squad!” Mary said gleefully. “He said it’s the best hundred dollars he’d ever spent.”

The class fell into an excited buzz until Miss Bliss called it to order. “Now, everyone,” she said, “this is a very proud moment for us all. Mary’s father will be one of just six men in the entire state who will get to be on the firing squad. Won’t that be great?”

Mary smiled at Miss Bliss, who was very pretty. Mary had a huge crush on Miss Bliss and wanted to be just like her when she grew up.

“Of course, it’s not just a matter of being famous,” Miss Bliss said. “Mary’s father, Mr Cummings, will be doing a very important job. Can anyone tell me what it is?”

A thin arm rose at the back of the class. “It’s to kill that bad man,” the owner of the arm said. “That Douglas.”

“Yes, Douglas,” Miss Bliss replied. “A very bad man, as we all know. He killed two policemen, and you know policemen are good people who keep us all safe.”

“I saw him on TV last night,” the boy at the back said.

“Yes, very ugly, isn’t he?” Miss Bliss shuddered delicately. “You can see the evil in his face. Anyway, he has to be punished for killing those policemen, and Mr Cummings, Mary’s father, is going to help do the job.”

“My father said they put a blank bullet amongst the real ones,” Mary said. “But he says that he’ll insist he gets a real bullet. He said he wants to be sure he does his job, and by God...”

“Sorry,” Mary replied contritely. “He said he paid for the chance and won’t be deprived of the kill.”

“He’s a brave and good man,” Miss Bliss said. “You could ask him to come to the class tomorrow and give us a talk on how the execution went.”

Mary blushed even pinker with pleasure. “I’ll bring him along with me,” she promised.

“That’s good,” Miss Bliss smiled. “I’m sure your mother is very proud. Will she go along with your father to the execution? I’m told the lottery owners can bring along their family members as witnesses.”

A brief shadow passed over Mary’s face. “I don’t know,” she confessed. “She said she doesn’t want to be the wife of a killer. There was a row.”

“I’m sure it will be quite all right,” Miss Bliss said hurriedly. “Now, everyone, open your textbooks and turn to page forty-three...”

“Mary,” Miss Bliss said the next morning, “I see your father didn’t come with you.”

“No, Miss Bliss,” Mary confessed. “He said he didn’t want to come.”

“Why not?” The class hadn’t yet begun, and the other children were still coming in. “I saw in the news that the execution went off all right.”

“Yes, he said it went fine.” Mary scuffed her shoe on the floor. “He didn’t want to talk to me about it though. When he came back this morning his face looked all funny and grey.”

“I’m sure he’ll be fine,” Miss Bliss said soothingly. She held up her newspaper. “Look, here’s a picture of your father and the other members of the firing squad, right on the front page. And here’s another picture of the chair in which Douglas was shot.”

Mary looked at the paper. “My, dad looks fine, doesn’t he?”

“I’ve got an idea,” Miss Bliss said. “Why don’t you talk to the class this morning, show them the paper, and tell them all about how your father won the lottery and did his duty? Would you like to do that?”

Mary nodded, her heart filled with love for her teacher, and she thought once again that Miss Bliss was a very pretty woman, and she would grow up to be just like her, after all. 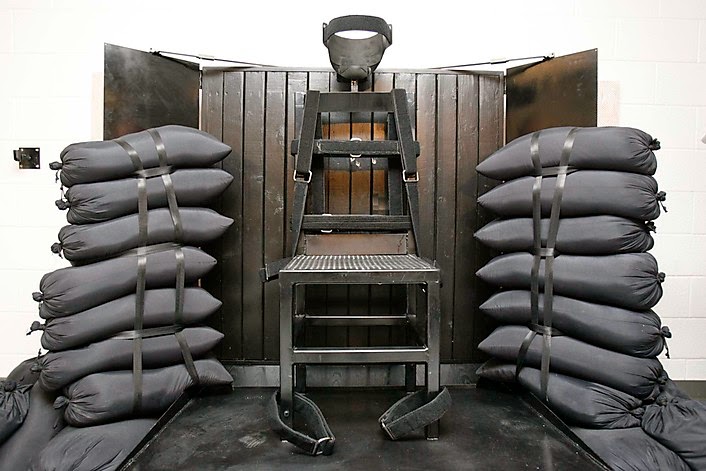