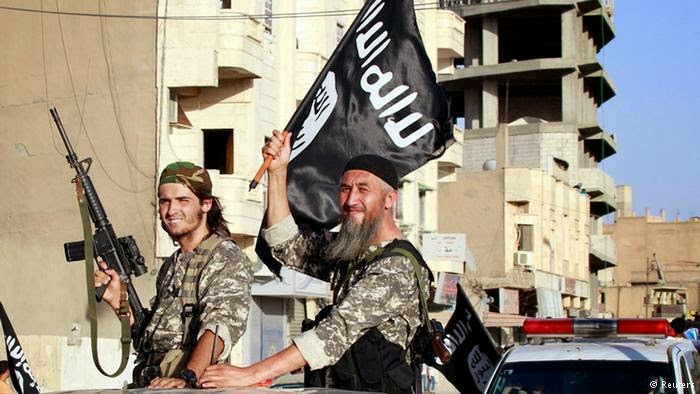 So – let me tell you a couple of things about the Great Big Islamic State Threat du jour.

For the purposes of this show’n’tell, I’ll pretend that the Islamic State (which I’ll call ISIS for convenience’s sake) is not an American creation and tool (which of course it totally is). For the current purpose I’ll pretend that it is exactly what it is claimed to be – a radical Islamic insurgency carving out a jihadist terrorist state in Syria and Iraq, which it intends to expand into a caliphate stretching from India to North Africa.

Where does that get us? Doesn’t it justify the extermination of this sadistic, ultraviolent movement by any and all means possible before it overwhelms us all?

Let’s look at what ISIS is. It’s a conglomeration of disparate groups with wildly varying ideologies, which are fighting under a black flag of convenience. Few of the “ISIS” who allegedly overwhelmed the best the farcical American-trained Iraqi army had to offer were actually ISIS. A lot of them were (and are) Baathist militia comprising battle-hardened trained soldiers from the days of Saddam Hussein – the Naqshbandi Army and the misnamed Islamic Army. Others are groups from Syria which were given the Hobson’s choice of signing on with ISIS or being eliminated. And the rest are disaffected Sunni tribal militia, alienated by the systematic anti-Sunni policies followed by the Washington-installed “government” in Baghdad.

What do these people want? Some of the Baathists long for a return to the enforced secularism of the Saddam era, and these are the same people – the hard-drinking, rigidly secular generals of the old Iraq Army – who are in charge of the military campaign. Many of these officers actually offered to join the new Iraqi army and were rebuffed, whereupon they went over to the insurgency. Two of these generals, Azhar al Obeidi and Ahmed Abdul Rashid, have in fact been appointed the governors of Mosul and Tikrit respectively by the Baathists.

Some other Baathists, undoubtedly, would be satisfied with some kind of diluted Sunni Islamism – the top commander of the Naqshbandi Army, Izzat Ibrahim al Douri, was one of the few practising Muslims in Saddam’s inner circle. The Sunni tribal militias, on the other hand, are divided among those who demand a partition of Iraq and those who want equality between the sects. And as for the Syrians, a lot of them have no greater desire than to gather arms, money and experience to return and fight the Syrian government.

Even the core of ISIS is hardly homogeneous. It comprises jihadists from tens of countries, including at least some Indians, who have absolutely nothing in common with each other (including language, culture or military training) except an adherence to an ideology. And that ideology, itself, has nothing more to offer but the setting up of a tenth-century political establishment completely out of touch with the requirements of the modern world.

Obviously, then, ISIS isn’t a group so much as a fiction of a group. It isn’t even an idea like al Qaeda, because it has no goal besides the setting up of the “caliphate” which it has already declared – and, therefore, its primary goal has already been achieved. And its “allies” – the Baathists and the Sunni militia, not to mention the Syrians – are fighting for completely different reasons, most of which are actually completely contradictory to ISIS’ own aims.

So what is the outlook for ISIS? In the short term, it’s attracting recruits for one reason, and one only – it’s the new, dynamic kid on the block, the street thug who’s charismatic, covered with bling and with plenty of money to throw around. Such street thugs usually collect a following in short order, but they also have a short lifespan because they overreach themselves very quickly.

On the other hand, the far from charismatic and very sclerotic leadership of al Qaeda’s core group are like the capos of la Cosa Nostra – well-established, cautious, thinking in the long term and careful about the risks they take. These mafia bosses don’t attract attention as far as possible, and they end up living much longer and making much more money than the young kid on the block.

In other words, from the jihadist point of view, ISIS is the equivalent of a sprinter, say, a hundred-metre runner who will leave everyone else in the dust but run out of steam embarrassingly quickly. Al Qaeda – building up influence slowly and patiently by a system of franchises and subsidiaries worldwide – is the marathon runner who waits for the opponent to exhaust themselves, whereupon a last burst of speed will win him victory. But the TV cameras love the sprinters, and nobody even remembers the marathoners’ names.

It’s when the opposition exhausts itself – that is, when the Americans and Europeans run out of finances and ability to continue their endless Global War Of Terror – that al Qaeda will make its move. Not before. Until then, it’s willing to just keep itself in existence, while setting up launchpads in areas like Yemen and Mali from which to conduct future operations.

But how great is the jihadist threat, actually? If you look at it, not very. Sure, the jihadists can cut off heads on camera and blow up car bombs in photogenic balls of fire, but in all these years of endless jihad, have they been able to control even one single country? Even the Taliban – which is not a jihadist organisation, just a Pashtun tribal fundamentalist militia – at the height of their power could not control all of Afghanistan. The prospects of jihadists taking over anything of any substance are dim unless one looks into the very, very remote future. And long before that future arrives, global warming, resource depletion and the new imperialism of NATO will create problems which will make jihad look like a non sequitur.

Currently, ISIS occupies a space in West Asia which, for convenience’s sake, we might call Syriraq. It has not, after its initial gains, shown any great ability to conduct further advances – and that’s without the airstrikes currently being conducted on it by the United States.

For all practical purposes, therefore, ISIS has been boxed in and contained. As such, as long as it is left in its box, it will not last long. Its components will soon disintegrate into different mutually warring factions, which will simultaneously, and increasingly ineffectually, fight the external foes. These factions will swiftly draw funding from different power rivals – from Saudi Arabia, Turkey, and Qatar for sure, and probably from other sources as well. Some of these funds will be in the form of protection money, and the rest as a means of using the factions as proxies against the factions run by the others. The quantum of violence will increase in the short to medium term, but will be restricted to Syriraq; and in the long term it will die out, not with a bang but with a whimper.

And that is if the Syrian and Iraqi armies, the latter under Iranian leadership and with the help of Shia militias, don’t finish it off first.

But all that will happen only if ISIS is left boxed in Syriraq and allowed to autodestruct.  Fortunately for it, the Nobel Peace Prizident has other ideas.  As everyone knows by now, he’s decided to “degrade and destroy” it by simultaneously bombing it and by arming the other, “moderate”, Syrian militias to fight it.

Naturally, ISIS must have broken out the non-alcoholic champagne when it heard that news. For one thing, it’s been given a purpose greater than the already-achieved goal of setting up its “Caliphate”. The evidence shows clearly that ISIS got a massive “shot in the arm” when America decided to name it its Global Enemy Number One. The United States is hated worldwide by a lot of people for quite excellent reasons, and being identified as its enemy increases the acceptability of virtually any group, anywhere. Besides, the usual American tendency to drone-murder schools and weddings, bomb funerals and target random “military age males” on suspicion alone, will flood ISIS with new recruits.

And, as everyone knows well enough, and as the Evil Emperor himself admitted, there are no “moderate” Syrian rebels. Those that are receiving American largesse have either defected immediately to ISIS or else declared that they will not fight the Islamic State – but that didn’t stop the US Congress from authorising a military aid package for them anyway.

Directly arming and funding your enemy so that he has the wherewithal to fight you, while simultaneously increasing his support base and recruitment by ineffectually bombing him, has to be one of the least effective military strategies in human history.

All this, of course, is if you truly believe the tales about ISIS being the unstoppable juggernaut jihadist monster it’s claimed to be. If you accept that it’s an American tool to be used to oust Iranian influence from Syriraq, it all makes sense, though. Until America completely loses control of the situation, as it is in the act of doing.

It doesn’t work when you’re holding a knife to your own throat making sawing motions, does it?