A Word On The Scottish Independence Vote 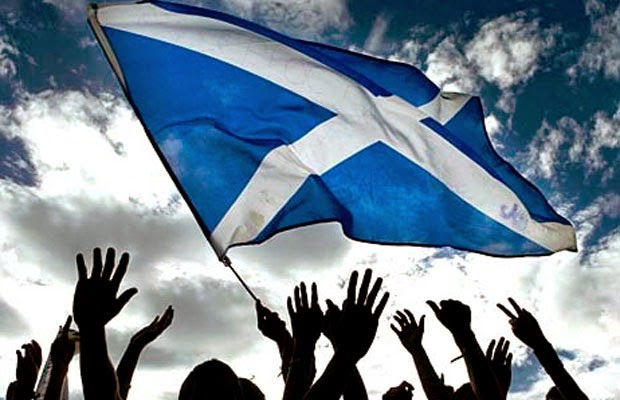 Tomorrow, as I write this, the people of Scotland will vote on whether to break away from Britain to be, once again, an independent nation.

I’m not Scottish, I have never been to Scotland, and I will, as far as it’s possible to be certain about anything in this world, certainly never visit Scotland. Whatever Scotland decides won’t directly affect me.

But I am a citizen of one of the many nations which were enslaved, looted and ravished by the unspeakably vile British Empire. My people were one of many who were starved in deliberately induced mass famines by the British, their young men marched off to war to fight in Britain’s conflicts, their resources stripped to feed British factories, whose products were then sold back to them at gunpoint. My people, like others, saw the British come as missionaries and traders, and stay as conquerors and occupiers. They saw the British capacity for greed and perfidy, their utter and unscrupulous criminality.

Not for nothing has Britain earned the name of Perfidious Albion.

The British came, they sucked us dry, and they left when there was nothing more that they could profitably extract. And they did it over and over again, all across the globe, from West Africa to South East Asia. The only lands they didn’t strip bare were the ones they seeded with their own colonists; Canada, New Zealand, Australia.

Is it a wonder that I believe Britain has lost all right to exist?

It’s another interesting thing, which most people should have noted by now, that when it comes to referendums on independence elsewhere – Kosovo, say, or South Sudan – the West is all for it, and pours considerable resources into ensuring the results will go in the desired direction, even though the end result is always chaos and infighting. However, when these referendums are to be held in places where the main country is a Western puppet, like Moldavia or Ukraine or Georgia, they are as much against them as they are for them in nations which aren’t friendly to Uncle Sam, even though the reasons given by the secessionists – majoritarian brutality and oppression – are the same as those America and the EU support, and usually with far more credible evidence.

And when the secessionist referendums happen in their own countries – Quebec, say, or Catalonia, or now Scotland – they are as strongly against them, even though the prospective new nations are guaranteed to follow the same “democratic” traditions as the parent nations. Oh, when it comes to preserving their own territorial integrity, anything goes, including open threats and blackmail.

Double standards which would seem strange to anyone who thinks the West is as honest as it claims to be.

So this is my message to the Scottish people:

You have the opportunity to rid yourself of the vilest, most evil political construct ever to exist, the British Empire. Please do not throw away this chance.

If you choose to stay on as part of the British Empire, what will you have to look forward to?

- Continued exploitation at the hands of the English, who suddenly realised their “love” of you when you announced your secession referendum. Remember your emphatically left-wing tradition, drowned out by the inheritors of Thatcherism and their comrades in arms in England.

- Continued slavery to the whims and fancies of the United States of America, with your young men being sent off to fight in its imperialist wars in the name of a “special relationship”.

- The continued opprobrium of the world, when the government in London continues to shelter terrorist warlords and criminal oligarchs, and keeps repeating transparent falsehoods in the interests of the Evil Empire.

- The anger and disappointment of other prospective new nations, who are looking at you with hope, in the belief that your independence will go a long way towards validating their own.

Help end Britain, a name which should no longer exist outside the history books. If you miss this chance, your children may not forgive you.

Also remember this: you’re voting for independence. The vile British Empire, on the other hand, is fighting for its survival. If Scotland goes, how long can the English hold on to Wales? Northern Ireland? Even Cornwall? The colonies dotted around the globe, like the Islas Malvinas and Gibraltar? Britain knows this, and will do anything – anything at all – to ensure its continued existence. Unless you vote by a very considerable margin for freedom, the vote could easily be rigged to read the other way...and it will.

They claim that if you vote for freedom, you'll be worse off. So why is it that they are now coming, hat in hand, to beg you not to break free?

Vote in large numbers and vote for freedom and liberty.