Jesus Was A Woman

He was the Saviour, the Son of God, born though of a woman, who was “without sin”.

Well, further, he was arrested, tried, and executed on a cross, following which he died. And, after that, he rose from the dead.

No, he didn’t appear to die (possibly drugged to deceive the executioners) and was subsequently revived before he actually shuffled off this mortal coil. He actually died so he could be resurrected.

And, he was Jesus Christ, born of a virgin, and everyone knows that tale.

Well, maybe not quite every bit of that tale.

Because, if you take the statements of the Bible at face value, it’s impossible to avoid this conclusion…

Jesus was a woman.

Back in 2007, it was confirmed that a baby bonnet hammerhead shark was born parthenogenically, without the mother’s mating at all. Analysis of the baby’s corpse (it died after a few days, killed by other fish in its aquarium) set all doubts to rest. This means that among vertebrates, mammals are the only class that cannot reproduce parthenogenically.

But then Jesus was a mammal, right?

Well, let me modify my statement above: among vertebrates, mammals are the only class not known to be able to reproduce parthenogenically. It was thought to be impossible for fish as well, until the bonnet hammerhead proved everyone wrong.

So, where does that leave us?

Let’s for the sake of argument accept the proposition (which I do not personally believe) that Jesus Christ existed; if we further accept the assertion that “he” was born of a virgin (rather than of an Almah, the original Hebrew word which can mean young woman, married or unmarried; concubine, or maid, in whatever context it’s used, but not necessarily virgin) – well, as I said, if we accept that assertion, we are faced with the fact that this person Jesus would have had to have chromosomes and genes.

If this person Jesus had no chromosomes and genes, it would seem impossible for “him” to have suffered biological death on the cross; and as a further extension of Christian dogma, “he” could not have been “resurrected” if “he” had not in reality died. And Christianity’s base of faith is the Resurrection. Right?

Also, according to Christian dogma, Jesus didn’t just appear magically, complete and whole, in Mary’s uterus. “He” was Mary’s son as well as “God’s”. He had a normal gestation period during which Joseph thought of breaking the engagement after knowing she was pregnant. Right?

Now, humans – in order to exist as humans – must have a minimum complete set of chromosomes. In normal humans there are 46 (some extremely rare mutants may have one extra). There are 44 autosomes (“body chromosomes”, which are responsible for all bodily characters like eye and hair colour, height and so on) and two sex chromosomes, which determine whether the individual is male or female.  The sex chromosome is either X or Y. X chromosomes are female; Y, male. A woman has the genetic code 44XX (44 autosomes and two X sex chromosomes). Men are 44XY (actually the Y chromosome is virtually functionless; it is the X chromosome that has all the sex characteristics. The function of the Y chromosome is basically to stop two X chromosomes from coming together, which would allow a female to develop. The female sex is the default sex for all animals, which is bad news for a patriarchy which claims Eve was made out of Adam's rib). In fact, some animal species have pretty much eliminated males altogether.

As sperm and ova develop inside our bodies, these are created by the splitting of our bodily cells into two – each of which contains half the genes and chromosomes of the original. One 44XX cell therefore creates two 22X cells; and one 44XY creates one 22X and one 22Y.

When a woman’s egg cell is fertilised by a man’s sperm (y’know, when they have sex, or in a test tube, doesn’t make any difference to the argument), the woman is contributing 22 autosomes and an X chromosome to the mix. The man contributes 22 autosomes and either an X chromosome or a Y chromosome. Depending on this, the fertilised egg may be 44XX or 44XY and will develop accordingly into a male or female child.

So, in the case of all parthenogenically produced organisms, including the bonnet shark, the female is responsible for producing the entire genetic code. All of it. The offspring is therefore inevitably female. It cannot be otherwise. Unless “god” took the form of a human sperm cell, complete with 22Y genetic setup, in order to knock Mary up; and if the people who wrote the Bible were far too biologically illiterate to take that possibility into account that’s just too bad. I mean, the Bible being the unalterable Word of God and all, so if they didn’t put that in it then it didn’t happen.

And, so, therefore, Jesus was a woman. Like it or not. All right, so she was possibly a bearded lady, but she was still a woman.

The Bible as good as says so. 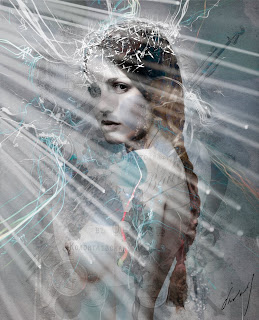