When I grow up I want to be a drone pilot.

I want to fight for freedom
On the other side of the world
Sitting here, in front of this screen,

Watching the action
Like a war movie
Or a video game.
I play video games well. I blow lots of enemies away.
Well enough to be a drone pilot. 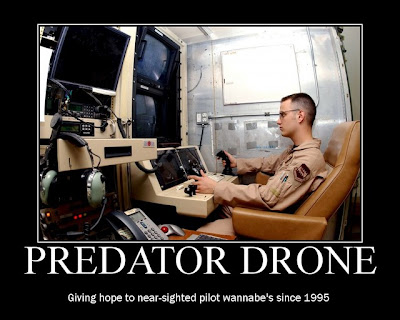 You can be a hero when you are a drone pilot
Flying in alien skies
Killing the bad guys. It’s easy.
Press a button and they die.

Yes the rockets fly out, there’s a flash and a puff of smoke
No mess, no blood to deal with, no smell of burst open guts
No sound of screaming.

You look at a screen. You press a button. The bad guys just die.

And they deserve to die
Because the enemy’s evil, cowardly and sly
And sneakily crawls on his belly

While my drone flies missions for freedom
Bravely in the sky.

When I grow up I want to be a drone pilot

I want to live science fiction live
And fight the war the way it was intended
Without the loss of a real life.
Just images on the screen blowing apart
On the other side of the world

My missiles the voice of God
And anyone who doesn’t listen
Struck down from on high
Like a bolt of lightning
From a cloudless sky.
Yes.

When I grow up I want to be a drone pilot
And blow evildoers away.