Word Of The Day

For the first time ever, there is now a unit for measuring patriotism!

Definition: It is the level of patriotism achieved when an Amerikastani (or Brutish or other EUNATO) citizen randomly accuses a stranger online of being a "Russian bot" for the crime of disagreeing with his or her love of Hillary Clinton/hate (and ignorance) of Vladimir Putin and Russia/admiration of the so called state of Israel.

Example: "Did you see this response column to this article saying Trump is betraying Israel by withdrawing troops from Syria? It's crawling with people who say that America had no right to send troops there in the first place! I called each one of them a Russian bot!" 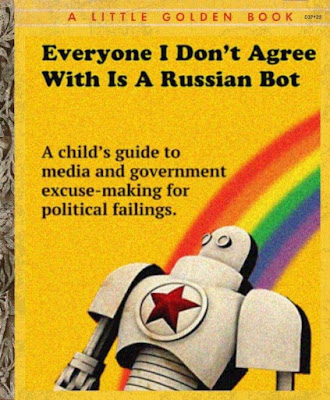 One millirussianbot being the level of patriotism achieved by insinuating that said stranger is a "Russian bot" without openly saying so, for instance, calling them "Ivan" or asking what the weather is like in Moscow.

Patriotic physics and chemistry textbooks will soon be compelled to include this unit, if the authors responsible know what's good for them!
Posted by Bill the Butcher at 3:53:00 pm