P and A: a cautionary tale

Let me tell you a story.

Our hero is a certain man, we'll call him Mr P, who lives in a large house with a front garden and a gate. Some way down the lane there lives a Mr A, who is a known Mafia criminal with a history of violent crime. Mr A has paid off the police chief, so there is no point complaining to the law about Mr A's crimes. He owns the law.

Now, Mr A covets Mr P's nice house and garden. He doesn't need either, but he covets them. Also, the fact that Mr P doesn't obey his every whim, like everyone else on the street, rankles with Mr A. And Mr P is not unaware of any of this.

One of the reasons that Mr A can get away with his crimes is that he has a gun. It is a big gun, a machine gun of 14.7mm calibre, and just about everyone else on the street is either unarmed or has only muzzle loaders. The only exception is Mr P, who happens to own a machine gun himself. Not as big as that owned by Mr A, 12.7mm rather than 14.7, but not far behind.

Now one day Mr A comes out of his house carrying his machine gun, comes up the lane, and uses it to shoot the lock off Mr P's gate. Mr P, watching from his window, does nothing. Mr A, seeing that his actions have brought no punishment, walks into the garden, trampling over Mr P's flower beds, and shoots Mr P's pet rabbits. Mr P still watches, doing nothing.

Then Mr A begins hammering on Mr P's front door, to which Mr P's response is to....pull down the shutters on his windows and shout that Mr A's activities are unacceptable and an affront to society.

What would you think of Mr P, here? Would you commend his restraint in not starting a gunfight that would shoot up the street? When Mr A breaks into his living room, isn't Mr P going to have to start that gunfight if he isn't to be robbed of hearth and home?

And what if, as soon as Mr A had emerged on to the lane, Mr P had come out of his house with his machine gun, leaned casually on his gate, and pointed the gun in A's general direction? Would or would not have A got the message?

Obviously, Mr P is Vladimir Putin, and Mr A is...you know who.

The biggest problem with Putin in foreign policy is that he's reactive, not proactive. He gets the blame anyway and the sanctions, so it's become self defeating to let the west make the first move and then do damage control. But he still does that, six years after Libya, nine years after Georgia.

Look at Libya. In 2011 Russia could have legitimately come to the aid of Gaddafi, and easily defeated the NATO-sponsored terrorists. It would have achieved these things:

1. Put the US on notice that creative interpretations of UNSC resolutions for illegal regime change wars is unacceptable.

2. Cut off the flow of weapons via Clinton's rat line to jihadis in Syria, which in turn would have dramatically shortened the war there and also put America on notice that intervention there would not be tolerated.

3. Also laid down an unspoken but real red line over further meddling in Russia's allied countries, like Ukraine, and then any attempt by Nuland's Nazis to carry out the Maidan coup would have been far more circumspect.

Even supposing Putin let that chance slip for some unknown compulsion, he had a second chance in Kiev.

In 2014 Russia could have taken over Ukraine, rescued the country from Nazis, and would only have at most got the same sanctions as now. Instead Poroshenko has American troops training his Nazis, is planning an invasion of the Donbass, and there is far more chance of a major war now than if Russia had sent in troops to restore Yanukovych. After all Yanukovych never resigned and America is backing the Saudi Barbarian invasion of Yemen to restore Hadi, who most certainly did resign. And Russia is fighting a war in Syria that is far more complex and fraught with danger than the one in Libya, and this war need never have been fought.

Now what happens when (more when than if) the Ukranazi coup regime invades Donbass in force? Russia has been repeatedly blamed for "invasions" of Ukraine that never happened, so what does it do if the coup regime, with its American trainers and "advisors", threatens to roll over Novorossiya? Will Putin sit idle and let the Ukranazi junta win? If he does, he'll be signing his own political death warrant, not to speak of the literal death warrant of the people of the Lugansk and Donetsk People's Republics. So he will have to intervene, again being forced into a war that need never have happened if he had taken more limited action earlier.

Contrast Xi Jinping. China is following an aggressively proactive policy of trade deals, forging close relationships with every country possible, and at the same time is bolstering its military to the extent that it is immune from military aggression (no matter what Trump might pretend). If America wants to take on China it will be on ground of China's choosing. That's the exact opposite of Russia.

And that is why Putin needs to stop accommodating his "Western partners" and safeguard Russia's well being. Because whatever he's doing now isn't working.

Mr P may be waiting for Mr A to drop dead of a heart attack, but it'll probably be too long a wait.﻿ 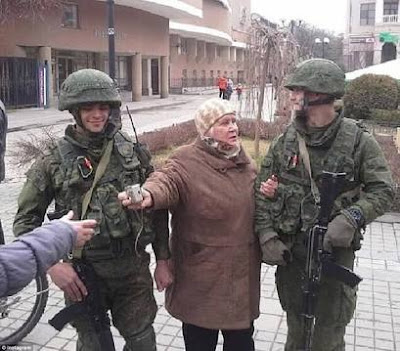