One Day At The Village Well

Arifa saw the cow as she was coming round the corner of Rahman Chacha’s shop. It was a large black cow, with short thick horns and an udder that dangled almost to the ground. It was rooting in the garbage pile that lay opposite the vegetable market, turning over polythene packets and broken wicker baskets with its snout.

Arifa was on the way to the well on the far side of the village. There was a tubewell near her house, but it had finally run dry yesterday.  Though Arifa had cranked the handle for almost half an hour this morning, she’d got no more than half a mug of water, and that had been brown with dissolved mud.

This was not a surprise, because there had been no rain in months and the tubewell had been yielding less and less water, but even yesterday she’d been able to coax enough out of it to manage. Not that it had made a difference to her mother.

“Go and get water,” Arifa’s mother had ordered. “Come back quickly, so I can cook breakfast.”

“I don’t want to go to the well,” Arifa had said mutinously. “Why can’t Ahmed go for once?”

“Your brother has to offer namaz and go to work,” her had mother replied sharply. “Stop wasting my time and get the water now.”

So Arifa had taken the two large plastic buckets, put on her sandals, and set off towards the well. It was still fairly early in the morning, and still fairly cool. Besides, the village hadn’t properly woken up yet, so she could look around and enjoy the fresh air. But of course she couldn’t say that to her mum. Her mum didn’t believe in allowing her to enjoy herself.

The cow paused in its rooting, looking up at Arifa. Though it was a very large cow, it was very thin, its black skin stretched tight over ribs like barrel staves. Its eyes glistening like black stones, it raised its snout and bellowed plaintively.

“Hungry, are you?” Arifa asked. She looked around. Opposite to Rahman Chacha’s shop there was a stone wall, with vines of some kind growing over it. She pulled off as much as she could, put it into the buckets, and walked towards the cow. “Here, eat this.”

The cow looked at her warily, and at the buckets. It seemed suspicious, and its short thick horns looked sharp, so Arifa emptied the buckets by the roadside and stepped back. “Eat,” she said to the cow. “Go ahead.”

“You,” someone shouted. “What are you doing?”

Arifa turned quickly. A fat man in a sleeveless vest and pyjama bottoms was pointing at her. “What are you doing to that cow?”

“Doing to the cow?” Arifa repeated, astonished. “Nothing. I was just feeding her.”

“Feeding her?” The answer seemed to enrage the fat man even further. “Why are you feeding the cow? When did you people ever feed cows?”

Other people came out of the houses all around. “What’s going on?”

“She says she’s feeding the cow!” the fat man said. His face had turned red. “Have you ever heard of a Muslim feeding a cow?”

“I’m not doing anything,” Arifa protested.

“Feeding? Poisoning the cow, more likely.” The people jostled closer to Arifa, making a wall of faces. Their voices rose to form another wall, of sound. She could only make a phrase out, here and there. “Maybe she means to fatten the cow up so she can eat it afterwards...” “...they hate cows because we Hindus take cows as our mother.” “Let’s teach her a lesson.” And, inevitably, “...Pakistani!”

The first hand had just reached out to snatch at Arifa’s dupatta when another voice came from the back of the crowd. “What’s going on here?”

The crowd parted. It was the old temple priest, Pandit Shivram. He looked at Arifa and round at the people. “What are you doing to this girl?”

“She’s poisoning the cow, Panditji,” a few voices said. “No,” others contradicted, “she’s fattening it up to eat.” “No,” a third set said, “she’s trying to lure it away for the butchers and cattle smugglers.”

Pandit Shivram frowned terribly. “She’s just a girl,” he said. “You all ought to be ashamed of yourselves. Besides, I know her family. They’re harmless.”

“I saw her feeding the cow, Panditji,” the first fat man said weakly.

“And? Would you have said something if it was a Hindu girl feeding it? And don’t you have better things to do anyway?”

Slowly, reluctantly, the crowd dispersed. The priest turned to Arifa, who was shaking.

“Yes, Panditji.” Arifa felt the tears start trickling from her eyes and wiped hard at them with her dupatta. “I was just feeding the cow.”

“Yes, I know.” Pandit Shivram turned. “Where is this cow?”

Frightened by the crowd and noise, the animal had disappeared. There was only the small pile of vines by the side of the street.

The well was very old, much older than the village. It was made of brick and stone, with steps cut round and round the inside, just broad enough for one person. The drought had affected it, too; the water had shrunk to a tiny circle at the bottom.

There was a small crowd of women at the top of the well, waiting for their turn. A couple of them were talking at the top of their voices. Arifa recognised them; the tailor’s wife, Shabnam Chachi, and Sheetal Mausi, the jeweller’s wife. They saw her and grinned.

“Arifa beti,” Sheetal Mausi said, “how nice to see you here. We don’t see you mixing with us common people much, do we?”

“Her family is so clean,” Shabnam Chachi said, her obese face framed by the black dusty hood of her burqa. “They wash everything five times over. Their tubewell doesn’t have enough water to suit them.”

Arifa looked down at the ground at her feet. She’d be damned if she’d grow up to be like that, fat and loud and dressed in a burqa. She just hoped she’d be able to get home before the incident with the cow became public knowledge. If either of these women got to know, she’d never hear the end of it.

Fortunately, they seemed to have got bored with her and went back to their discussion. “And I said to my man,” Sheetal Mausi bellowed, “that if you can’t even satisfy me in bed, what do you do with it? Or are you not a man at all?”

Shabnam Chachi tsk-tsked in mock sympathy. “I can’t imagine why he can’t, with a lovely woman like you. Maybe he has someone on the side?”

Arifa wished she could disappear. Fortunately, one by one the women went down the well and dispersed. At last it was her turn.

When she climbed back up the steps with the heavy buckets, her arms were aching. She paused a moment to catch her breath, and was at once jostled by another girl.

“Get out of the way,” the girl said. Arifa recalled her vaguely, Zeenat or something. She was tall and thin, her brown burqa like a sack draped over her limbs. She glared at Arifa. “Some of us have things to do even if you don’t.”

“I’m not in your way,” Arifa said. “You can just take one step to the side and get by me.”

“Don’t tell me what to do,” Zeenat, or whatever her name was, snapped. “Just because you think you’re better than everyone else, you think you can order us around.”

“When did I say I’m better than anyone else?” Arifa said. “I’m just taking a breath after pulling these buckets up all this way. Everyone does it.”

“You don't have to say it.” Zeenat bared her teeth like a vicious dog. “Look at you, dressed in a salwar and dupatta, not a burqa like a decent Muslim girl. Are you trying to be a Hindu or something? I’ll bet you hang around with Hindu boys as well.”

Arifa stared at her. “Are you totally insane?”

“Are you calling me mad?” the tall girl yelled. Arifa tensed, expecting Zeenat to slap her, but there were other women, shouting at them to get out of the way, everyone was waiting for water.

“I’ll see you later,” Zeenat said, and spat in one of Arifa’s water buckets. “Don’t think you’ll get away with this,” she shouted as she pushed past and started down the steps.

Arifa looked at the glob of saliva floating in the water. Then she carefully tilted the bucket just enough for it to slop out on the ground. The saliva and water spattered on her dusty toes.

The vegetable market had opened as Arifa passed by it on the way home. The black cow was back, and was trying to steal a cabbage from one of the stalls. The stall owner rushed out from behind his counter and started beating the animal viciously with a stick. The cow bellowed and galloped ponderously down the street.

Arifa averted her face and went quietly on her way.

It was going to be another unbearably hot day. 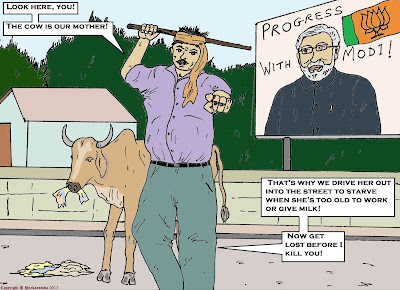