A Question About Kashmir

This isn’t really an article; it’s a question I’ve been pondering for a long time, and I’d request some coherent answers.

This is the question:

Can someone please explain to me why the hell we need to hold on to Kashmir?

As you probably know, I wrote a book on the Kashmir insurgency, and long before I even started researching the topic, I was already thinking about this. And to this day I have no answer.

Why are we hanging on to Kashmir?

Why are we spending enormous amounts to garrison the one third of this state that we control, while pretending that all of it belongs to us and that we’ll someday get it back? (Spoiler alert: we won’t.) 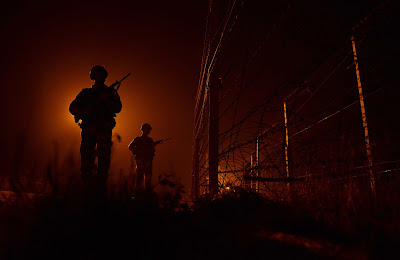 Why is it that while we can’t even wipe out a relatively lightly armed guerrilla force (no anti-aircraft missiles, no mortars, no artillery, next to no landmines, let alone armour and air support; this isn’t Syria), we continue with the same tactics that haven’t secured victory in almost thirty years of fighting? How long do we want this bloodshed to continue? 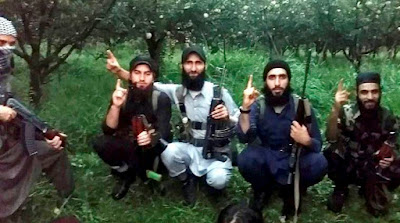 Why have we alienated an entire generation of the state’s youth, and turned tens of thousands of them to violent insurgency? Why are our soldiers under such pressure to eliminate said insurgents that they have been known to snatch innocent men off the street, murder them, and pass them off as “militants”? Why do we have our soldiers posing with the corpses of dead militants/”militants” like hunted animals? Whose dignity does this enhance? 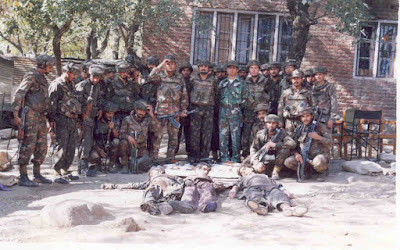 Why do we keep compelling people to vote in elections in which the turnout averages between five and ten per cent, and resort to forcing them to vote at gunpoint to make numbers look better if necessary?

Why are we murdering protestors when not blinding them with buckshot blasts to the face? And not just protestors, innocent onlookers as well? Why are we actually committing the acts the cannibal jihadi propaganda ascribes to Bashar Assad’s government in 2011? He didn’t do it, but we actually are. 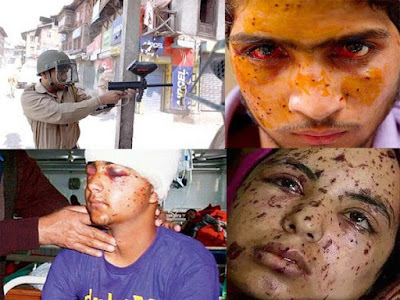 Why? Why are we creating a situation which will inevitably lead to the likes of ISIS taking the opportunity to set up base in the country and making a permanent running sore?

Why, if we are genuinely concerned about the welfare of Kashmiris, if we think of them as Indians rather than conquered inhabitants of an occupied and colonised territory, do we not ask them what they want and allow their own wishes to be heard? Why are we so fixated on this state that we are prepared to turn it into a gigantic prison camp just to keep it under some kind of control?

This is not to say that Pakistan is any better; the way it has treated the Kashmiris is arguably as bad or even worse. But the point is, we aren’t Pakistan. What they do shouldn’t be a template for what we do.

Nor is it an apologia for the Kashmiris, who have also committed their share of crimes; most notably the forcible expulsion of hundreds of thousands of Kashmiri Hindus (Pandits). But that came after, not before, the insurgency erupted, and in all the years afterwards, India has done nothing to ensure those Pandits can go back to Kashmir. So is it even interested in that happening, or are the Pandits just an excuse to justify oppressing Kashmiris, a whole generation of whom were born after they left and have not the slightest responsibility for throwing them out at all?

What will happen if we withdraw from Kashmir? Will the heavens fall? Will the other states of India immediately begin breaking away one by one? Is that it?

And if that is it, isn’t that proof that India is an artificial entity kept together only by military force, and such an entity cannot survive indefinitely in any case?

Or is that the real reason is that our overlords need an excuse to justify their oppressive laws, their obscene military expenditure, and also a raison d’être to divert our attention whenever necessary with a nice little war scare?

Is it "strategic"? What, in the nuclear age, is "strategic" about holding on to a mountain state which is difficult to supply, is snowed in for half the year, and in any case is bordered to the south by another state just as mountainous? Do we want to pretend that Pakistani divisions will descend on the North Indian plains and take Delhi through Kashmir? If that is so, what are our vaunted military forces good for?

Why the hell are we hanging on to Kashmir?

I really would like some answers. Logical, coherent answers.

Email ThisBlogThis!Share to TwitterShare to FacebookShare to Pinterest
Labels: nation