Nothing New On Any Front

In the recesses of one of my bookshelves is a slim hardcover in the Bengali language. On its black cover is a design that’s difficult to decipher, but looks rather like part of an anchor in dark ochre yellow. The title above this is easy to read, though: All Quiet On The Western Front, by Erich Maria Remarque.

I first read this book as a boy of maybe eight or nine, and I recall being confused right off from the start. I couldn’t make out what the hell was going on, and the more I read the more I felt disquieted and uncertain. Where was the heroism of the Commando comics we used to read? Never in those comics did soldiers visit someone in the hospital who had a leg blown off and died in agony. And who was fighting whom, anyway? I just couldn’t understand it.

Only later, many years later, did I understand what a great book it was.  Of course it didn’t bloody matter who was fighting whom; everyone’s primary urge was to try and stay alive. Of course there weren’t heroics; you aren’t thinking of heroics when you’re stumbling over disembowelled corpses and killing rats to prevent them eating your bread, when you’re crushing lice and stringing along barbed wire while an unseen enemy fires shells at you. And when I read it in English translation, I fell in love with it all over again.

There’s little point, almost a hundred years after it was written, of going over the details of the book; the reader will likely know well enough the story of poor doomed Paul Bäumer  and his tiny, and shrinking, group of friends. If not, he or she can read it here, free of cost. A schoolboy brainwashed by slogans of patriotism and defending the nation, he is pushed into volunteering, straight out of the classroom, for a war he has not the slightest knowledge of. He then spends the rest of the book cowering in bunkers and shell holes, fighting enemy soldiers who are exactly the same as he himself, trying not to get killed while watching his friends get killed and maimed one by one; starving unless the company’s scrounger can find some food somewhere, or unless so many of his fellow soldiers are killed that what’s left is enough to go around. Mud, fear, and the temporary pleasures of a stolen goose and a whore’s thighs – that’s the book, in a nutshell.

It was, as far as I know, the first antiwar book ever written and probably still the finest; and it doesn’t pull punches, not at all. You get everything from raw recruits voiding their bowels at the fist bombardment, and then getting slowly and painfully killed before they can so much as pull a trigger in combat, to the clueless “patriots” at home lecturing the frontline soldiers on how they ought to be winning the war. No wonder the Nazis, before they came to power, tried all they could to stop the book and the film made from it from being read and viewed in Germany. It’s irresistibly reminiscent of the way (a couple of years ago as I write this) when the Bollywood movie Haider, which was critical of Indian military actions in Kashmir, was bitterly criticised by the Hindunazis in India, who also demanded that the film be banned and/or boycotted.

Nazis – and Hindunazis – are worshippers of militarism and war, chiefly because that is all they have by way of policy to offer. If you take away conflict, they have nothing left, nothing constructive, no real ideology whatsoever.

It’s extremely important now to remember All Quiet On The Western Front, not only because it was a seminal piece of literature; it’s vital because now, a hundred years after it was first written, once again, wars are being called glamorous, and young men are being urged to join the military and “defend” countries in wars waged by rich ruling classes who aren’t themselves at risk. It’s vital because the blood shed is the same on all sides, and none of the blood belongs to the people responsible for instigating these wars in which the people die.

In fact, the name of the book, All Quiet On The Western Front, is a mistranslation – in the original German it’s Im Westen Nichts Neues – Nothing New In The West. That’s got its own little bit of irony, because there was nothing new when each day just continued the slaughter of the previous one. I’m reminded of the current imperialist occupation of Afghanistan, which has been going on since 2001 and where the occupiers now try and ignore the existence of the country itself as far as their media at home are concerned.

Im Westen Nichts Neues has been filmed twice. It’s more than time they made it again, preferably in 3D, with modern technology, and as realistically and as true to the source material as possible. Nothing should be left out – not the boys screaming in collapsed dugouts, not the hand-to-hand fighting in the mud with hand grenades and sharpened spades, not the lice and the rats and the horrors of basic military training.

They should, but they won’t, because these days the film industry seems to exist to make war glamorous and act as recruiting posters; and Remarque’s book was anything but. If they remake it they’re going to “adapt” it out of existence.

Instead of taking an image from what’s available online – it’s all either faux-heroic or mawkish – I decided to paint my own. Here’s Paul Bäumer trapped in the middle of nowhere, smeared in mud and filth, his face smothered in a gas mask. This is the way I see him, the way I’ve always seen him.

He was no hero by conventional reckoning, but in a way, he was one. In his own way, he showed the way for a century of pacifists and anti-militarists.

If that’s not heroism, it will do to be getting on with. 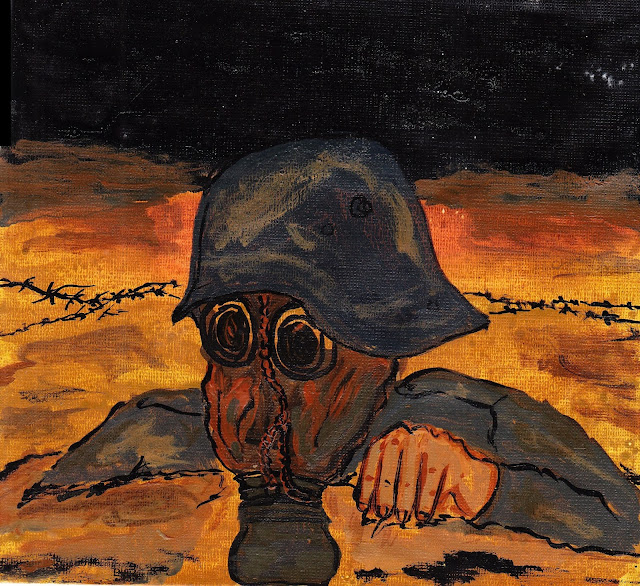