It Was A Dark And Stormy Night

I came across this online. 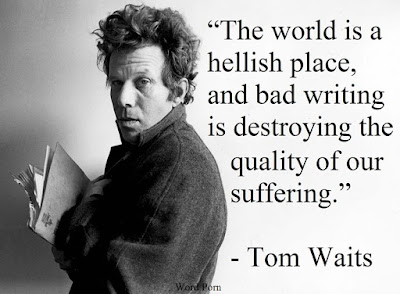 I have no idea whatsoever who Tom Waits is, but he thinks bad writing is destroying the quality of our suffering? I’ll give him suffering.

Her tear trickled like a drop of water from a melting icicle in the heat of a global warming induced summer, trembling from a mascara’d eyelash - the mascara was guaranteed not to run, and had been a gift from a boyfriend who'd then slept with her best friend, the bastard - and finally fell, like a Saudi bomb on Yemen, through the air, spinning slightly from wind resistance, in a graceful ballistic curve like a Topol M nuclear missile, until it smashed like a breaking heart into tens of droplets on her fake-Gucci-clad toes.

Take that, Tom Waits, whoever you are.

But that also triggered a memory. You see, there’s this thing called the Bulwer-Lytton Bad Fiction Contest, and it consists of entries each of which comprises one long and excruciatingly written sentence. That thing above would be my entry for the Love Story/Romance section, if I bothered to enter it in the first place.

So let me try a few more, in some of the categories :

The buzzard, circling warily in the sky, saw – further than the Stetson-shadowed eyes of the rustlers below could discern – the posse that was following from the ranch, led by the sheriff on a horse which, as it well knew, had one loose horseshoe, the nail of which had fallen off beside a mesquite bush in the shadow of which, at this very moment, a rattlesnake was swallowing a mouse which might have been the buzzard’s next meal, if only the rustlers hadn’t stolen the cattle so the posse would follow and the sheriff’s horse’s shoe’s nail hadn’t fallen off and attracted the mouse’s attention so the rattlesnake could eat it.

Having successfully bypassed the black hole, the crew of the star cruiser David Petraeus relaxed, and that was a terrible mistake, because something was crawling out of the singularity behind them, a gigantic space squid armed with tentacles which pulled the Petraeus back into the grip of ten immensely strong arms which held it steady while the titanic beak cut it open and ate the crew like lollipops, which was very strange, because how anything could survive inside a black hole, or climb out of it, and how a space squid could even survive in space at all was a mystery not solvable by anyone except somebody with the genius of Dr Tyson, the science officer on board the Petraeus, who would totally have solved it, too, only he was eaten first of all, and was very tasty besides.

The Prime Minister had summoned the Great Detective to find out who it was who had so foully murdered Admiral the Lord Montgomery-Chuff, late of the Royal Navy, who had had top secret documents in his possession, which were now missing – and the Great Detective, as soon as he began to exercise his little grey cells in the matter, knew perfectly well that the one person who was certainly not the killer was the butler, because, of course, the butler never did it; which was ironical indeed, because the day the Great Detective had the Admiral’s secretary arrested for the murder, the butler took the top secret documents out of the hiding place he had kept them in and went rushing to the Drogovingian Embassy to sell them, only to be run down in the street by a drunken madman driving a stolen bus.

King Arthur was sick and tired of his Knights of the Round Table because they were all always hankering after damsels in distress and searches for the Holy Grail, and since there weren’t enough damsels in distress in the land to be rescued on a regular basis, they had to be kidnapped and put in danger for the knights to rescue, and the amount of tears they shed while being rescued one more time made their armour all rusty; and as for the Grail, Arthur kept secret the fact that he had once found it and accidentally dropped it, so that it was now known as the Holey Grail, because it was full of holes.

Howling, the werewolf stalked the forest, seeking out what he needed most of all, more than the rabies and distemper vaccine that he needed to keep his licence renewed, more, indeed, than the new Werewolf-specific toothbrush he'd seen advertised on TV, which would clean the plaque from places no other oral hygiene aid could reach; no, he needed the one thing he'd forgotten to buy, and now, seeing a village with a shops still open, he loped into it and propped his forepaws on the counter, asking, in urgent tones, for the moonscreen he needed to stave off moonburn.

And here’s Fantasy to round it off for the time being:

The magician Swordfish was angry, for though he had sat for many years in his castle casting spells out of arcane books, people had begun laughing and saying they didn’t work; and the worst of them was a disgusting man called Ernest, who said he was good for nothing and never had been – so Swordfish searched far and wide and got together dinosaur claw and weasel hair and skunk spray and squid ink and made it into a great and infallible spell that would teach Ernest a lesson; and when he cast it and sat back to watch the results, the disgusting man stubbed his toe and said “Ouch”.

There will probably be future editions of this series on this blog, as an when I can think of them.