This thread is a classic example of why I think of the self-styled American “liberal” as the most dangerous species on the planet.

The original post was about WalMart apologising for making an ISIS flag cake, and was posted by someone whose name I’ve blacked out, but who is a Belgian living in the Imperialist States. The response of this so-called American “liberal” (note the rainbow flag) to my response is illuminating.

Please click on the images if they're too small to read. 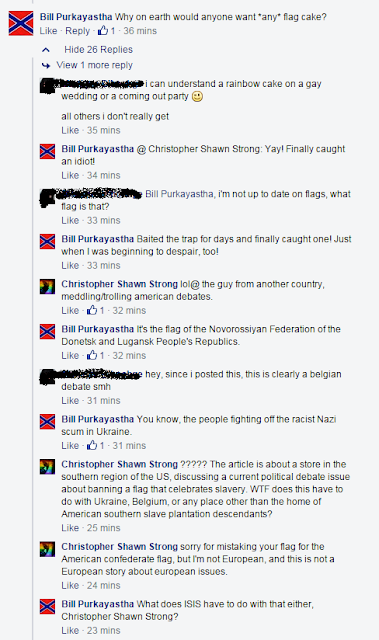 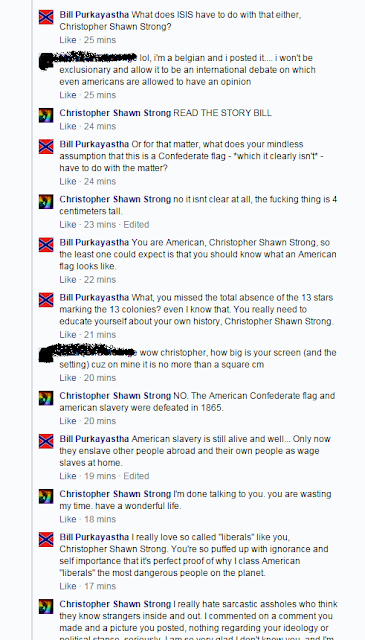 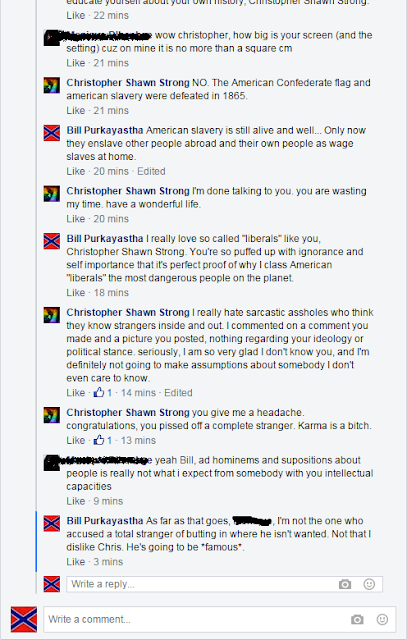 Amerikastani self-styled “liberals” are intolerant, bigoted, hypocritical, pompous, ignorant twits who are not just as bad, but demonstrably worse, than their so-called “conservative” counterparts. The latter not only don’t know but often make a virtue out of not knowing. The former are those who pose as though they have an “enlightened” worldview, and who are ready, nay, eager to cheer for anything they are told by their so-called “liberal” leaders. These are the people who will rush into imperialist wars of aggression when told that they are on a “humanitarian” mission – the old “White Man’s Burden” – and not even pause to question the narrative they’re fed.

These are the same people who will make noises condemning racism at home while doing nothing very much about it – and will be deafening in their silence as their government’s drones destroy brown-skinned people worldwide, their government’s trained jihadis behead and eat brown-skinned people, and their government’s pet Nazis shell and rocket civilians in the free part of Ukraine. These are the exact same people who will defend the war crimes of their so-called “black” president, which have handily exceeded those of his “conservative” predecessor, and who will line up to vote for Killary Klingon in 2016, exactly as directed.

Note that this is the so-called “liberal” who does not even know his own nation’s history, who is eager to jump to conclusions about someone else, and who is also of the opinion that nobody who is not American should post on an open forum which the original poster explicitly mentions is an open forum. This is the so-called “liberal” who imagines slavery is over as far as the Imperialist States of Amerikastan is concerned.

Perhaps he should look at his nation’s private prison industry.

I dedicate the latest episode of Raghead, which you may or may not have read, to the Amerikastani “liberal”.

I used to wonder why “liberal” was a dirty word in certain circles in Amerikastan.

To get back to the original point I made. Why on earth would anyone want to make a flag cake? A cake is made to be eaten, and then what’s left is turned to faeces, right? So if you feel strongly about a symbol, enough to want to have it on a cake, turning it into faeces is hardly a sign of respect. Am I correct?

If I were the guy who ordered the ISIS cake, I would have pointed that out.


Note: I wouldn't actually give a damn about Amerikastani "liberals" or "conservatives" as long as they would keep their nation's business within its own borders. It's because their nation is an Empire which attempts to rule us all that they matter. And not in a good way.
Posted by Bill the Butcher at 8:03:00 am

Email ThisBlogThis!Share to TwitterShare to FacebookShare to Pinterest
Labels: hypocrisy