The Great Big Horrorshow That Isn't

I had a rather strange experience last night.

This is not in itself strange. I keep having strange experiences. But this was enough out of the ordinary that I thought it worth mentioning.

I just finished reading The Mammoth Book Of Best New Horror 22, edited by Stephen Jones. It’s a yearly collection of the alleged best horror stories published in the magazines; this particular collection dated to 2010. 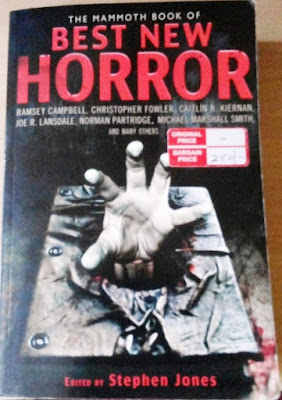 I tend to buy collections of horror and science fiction stories for two reasons – to read for entertainment, and to read to find out what the competition is doing.

Usually, when I read these collections, I find that I say to myself that so-and-so is a story I could have done better myself, or a story that is so putrid that I wouldn’t have touched the idea at all. Usually, out of fifteen or twenty stories in the average collection, about six or seven would bring out that kind of reactin in me. But not this time.

No, this time, for the first time ever, every single damned story in a book is beneath my standards. I won't even say that I could write these stories with my eyes shut. I would be ashamed to write them at all.

I don’t mean to boast. I don’t even ask you to take me for my word. This blog contains, er, a few pieces of fiction written by me, as you may have noticed. This book, too, is available for purchase. Get hold of it, read it, and read my own stories, and compare them. Then draw your own conclusions.

I’ll be totally frank here – just one story in the entire book, City of the Dog by John Langan, came even close to something I would find minimally acceptable as a plot, and even then  it was badly overwritten and telegraphed its “surprise ending” by the first third of the story. As for the rest, vapid meandering through the minds of depressed and/or hallucinating characters, with no plot and no denouement, don’t qualify as stories. Nor do crudely-written zombie fiction or tales of things happening without explanation or resolution.

I'll tell you the truth - I'd even prefer Stephen King to these, and you know what I think of him.

Is that the best horror writing out there? I find it hard to believe. Even a read through the net shows much, much better material, often by rank amateurs like myself.

But you know the real horror in this?

These people have their stories in a book called Best New Horror. I, and other horror writers you can read on the net whose works are infinitely superior, don’t.

On that level, it succeeds as horror quite well, thank you very much.
Posted by Bill the Butcher at 8:29:00 am