ISIS and the Soldier in White

The last few days, I’ve been making a conscious attempt to stay away from the news, because it’s always depressing at the best. From Yemen to Amerikastan, from Novorossiya to Nepal to Nigeria, Gaza to Somalia  to South Sudan, from Macedonia to Myanmar and Mexico to our Hindunazis in India, “good news” these days merely means that nothing much is happening, because when something happens the news is always bad.

The only exception to my decision to stay away from the news is ISIS. I have to keep up with the news from ISIStan, not because I want to be informed about the doings of these murderous savages, but because, for one thing, I have to know what they’re up to for Raghead purposes. And I might as well remind you to check out The Great Big ISIS Movie Extravaganza, because if you aren’t, you ought to be ashamed of yourself.

Now, as I believe I have both insinuated and said outright in the past, ISIS is a farce. If it was really what it was touted to be – the Great Big Threat To All Civilisation – it’d have long since been smashed to scrap in the sands of the Iraqi desert. Do you seriously mean to tell me that the same people who essentially bombed Saddam Hussein’s much stronger army virtually out of existence in just over a month in 1990-91 can’t eliminate a lightly armed force comprised basically of motorised infantry, with no air cover whatsoever, in what is it, nine months of air attacks? A baby can be born in that time. Can one imagine that this light force is taking over even more territory under this alleged effort to degrade and destroy it?

So, while we’ve all been watching this or that and talking about the other, ISIS has captured Ramadi in Iraq and assaulted Palmyra in Syria. In the latter town, where non-US-trained-and-armed Syrian forces were deployed, ISIS didn’t have a good time and was peremptorily thrown out. In Ramadi, though, ISIS was faced with the US-armed-and-trained-New Iraqi Army. And just as they did last year in Mosul and Tikrit, the New Iraqi Army abandoned its tanks, artillery pieces, and hundreds of those nifty Humvees (which ISIS loves to use as suicide bombs) and ran for Baghdad with wild yells of terror, as fast as it could go.

Let’s go over this again: embattled, exhausted Syrian forces using old Soviet-made equipment fight ISIS to a standstill and kick it out, with no external assistance. On the other hand, the US-created and armed, trained and financed New Iraqi Army, just like the US-trained, armed and financed “Free Syrian Army”, apparently can’t give its weapons to ISIS fast enough, even when supported by American air strikes.

This is a curious way to conduct a war if you ask me.

In Joseph Heller’s novel Catch 22, there’s a particular episode where the protagonist, Yossarian, is in hospital. Among the others in his ward is a mysterious figure called the “soldier in white”, because he’s encased head to foot in white plaster. Nobody knows who he is. He never moves or speaks. All there is to show he’s even alive is that there’s a bottle of fluid on a stand draining into his arm, and a metal pipe set into his groin from which fluid drains to another bottle on the floor. When the bottle on the stand is empty, the bottle on the floor is full, and the nurses simply switch them around.

“I don’t get it,” Yossarian says. “Why don’t they just hook up the bottles to each other and eliminate the middleman?”

Where it comes to the Great Big War Against ISIS, I have the same question. 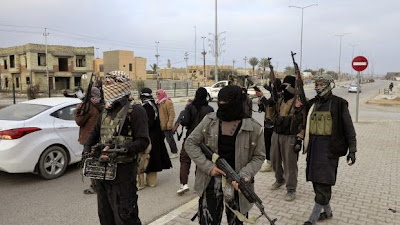