I can barely express in words how much I love Herman Melville’s Moby Dick. This is a book I read first back when I was a teenager, shortly after watching the movie (the one with Gregory Peck as Ahab). And that was after watching Jaws, which I didn’t, actually, like very much. After all, the shark in Jaws wasn’t exactly walking up on to the beach to eat people, was it? Why did they have to go into the water if they didn’t want to be eaten?

I’d better explain that though I watched both Moby Dick and Jaws in the movie theatres (in the same movie theatre, actually) that shouldn’t be taken as an indication of my age. That would have been quite a time-travelling feat, in any case, since Moby Dick was released in 1956 and Jaws in 1975. Until the mid-to-late 1980s, foreign movies usually arrived on Indian shores years to decades after they were released in their countries of origin. That is why I could watch both these flicks in the early 80s on the big screen. Not that there was any other option, TV in India being something which mostly came into existence in 1982, let alone such unimaginable luxuries as VCRs.

As I said, though, Jaws – though it was amazingly popular then, running in the theatre in town for something like seven or eight weeks if I remember – wasn’t a film I liked. I still don’t. Oh, the jump scares were nice – especially the scene where the shark surfaces in the wake of the Orca and Brody decides they need a bigger boat. You know the scene I’m talking about. But I was rooting for the shark.

Those of you who have been reading me for a while will be overwhelmed with lack of surprise that I was rooting for the shark.

One of the reasons that I rarely to never watch creature features is that I’m always hoping (usually against hope) for all the human characters to be eaten or crushed or otherwise finished off in as grisly a manner as possible. Especially the kids. There are few things in the movies quite as irritating as kids in creature features. Remember the two in Jaws who decided to snorkel along the beach with a fake shark fin?

Now when I went to watch Moby Dick, you understand, I hadn’t read the book. I didn’t know the story. I was actually expecting the whale to be killed off, like the shark was in Jaws, like any other Hollywood creature feature treated the titular animal(s). I go furious watching the Pequod’s  crew murdering the (black) sperm whales earlier in the film – yes, that’s right, furious – and I was hoping they’d at least get some kind of comeuppance before they “raised and killed” Moby Dick.

I did not expect that it was Moby who would kill them instead.

I still remember wiping my eyes furtively when the movie was over, and they were tears of joy.

To this day, a recurrent feature in my stories with animals (such a recurrent feature that it’s become pretty much predictable) is that the animal, inevitably, triumphs over the human. I’ve also written two stories which are sequels to Moby Dick – one from the viewpoint of Moby himself, years after the events of Melville’s novel, and the second set in modern days, where an immortal Ishmael still pursues an immortal Moby, to the detriment of innocents who get in the way.

But that was just the part about the hunted animal exacting full and satisfying vengeance on his pursuers. After a couple of rereading of the book, I’ve come to appreciate it on a much different level. I’m not talking about the alternate chapters forming a treatise on whaling, which I read the first time and then skipped on each subsequent rereading. I mean Captain Ahab’s insane quest after the White Whale, a quest of revenge for his missing limb...which was missing because he had gone to murder the whale in the first place.

Just think about this a moment. Someone sets up a situation that causes themselves suffering. They then go out for revenge for that suffering, pursuing that vengeance to the point of their own destruction – none of which would have happened if they hadn’t begun the cycle in the first place by doing something they had no need to do and no business doing. Even when given the opportunity, over and over, to pull back from the brink, they choose to pursue the course of vengeance, and that can have only one end.

Isn’t this all too like the course of a lot of world events of the last quarter-century?

One of the things about Moby Dick (the whale, not the book) is how rare peaceful pictures of the animal are. After all, Moby wasn’t hunted round the clock, seven days a week. Almost all the time, he would have lived a life much like any other sperm whale, swimming, diving deep to hunt squid, mating with female whales, echolocating in the depths, and the like. Yet it seems to be that all depictions of him focus only on his fights against the Pequod’s crew – as though he existed only as an engine of violence, nothing else.

And that’s why I painted this little picture of Moby: not lashing the sea in frenzy as in just about all the paintings I’ve seen online, but Moby as he deserves to be, swimming peacefully in the inky ocean depths as he goes about his life in peace. 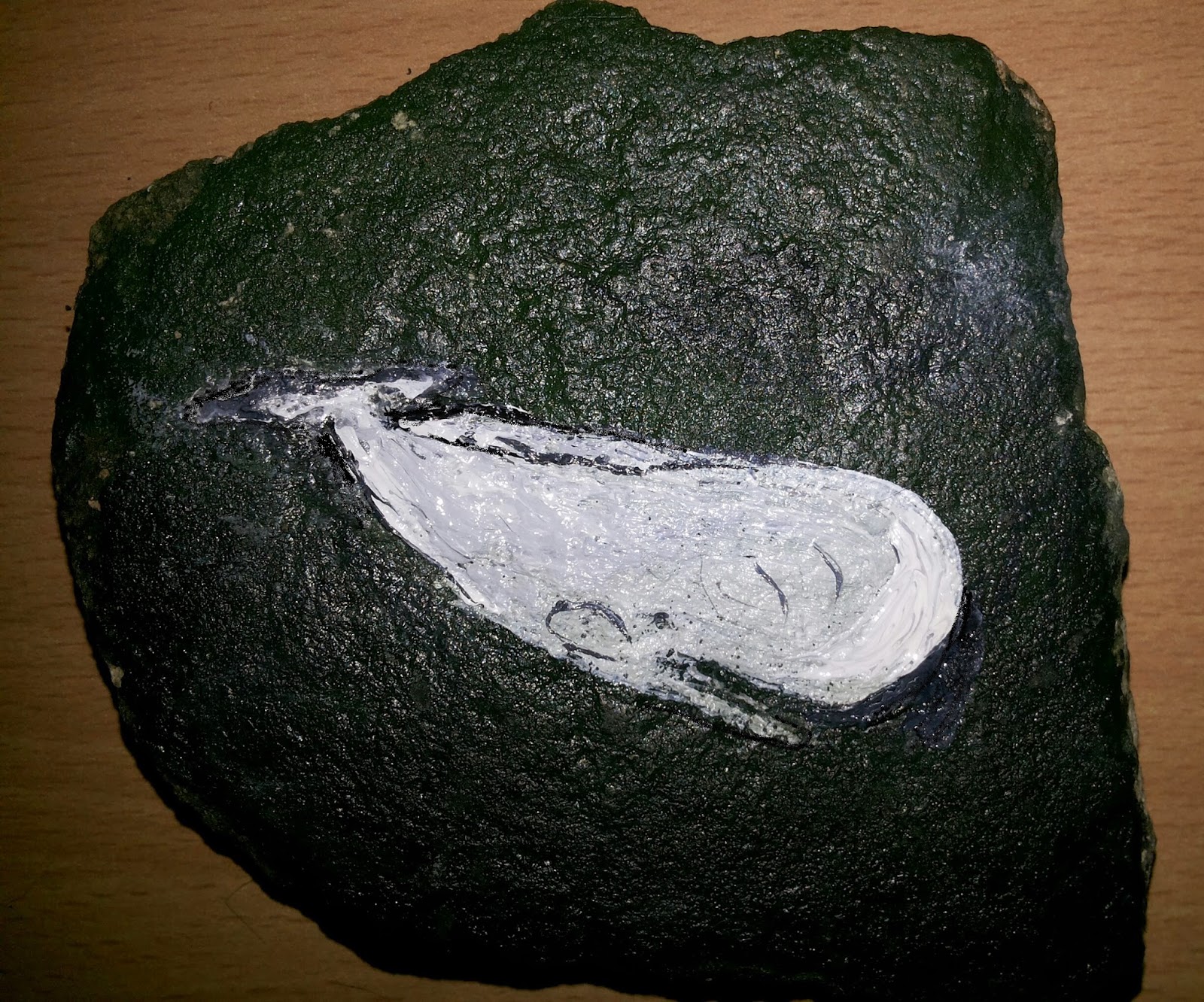