Sometimes, one photo tells much more than one might think. 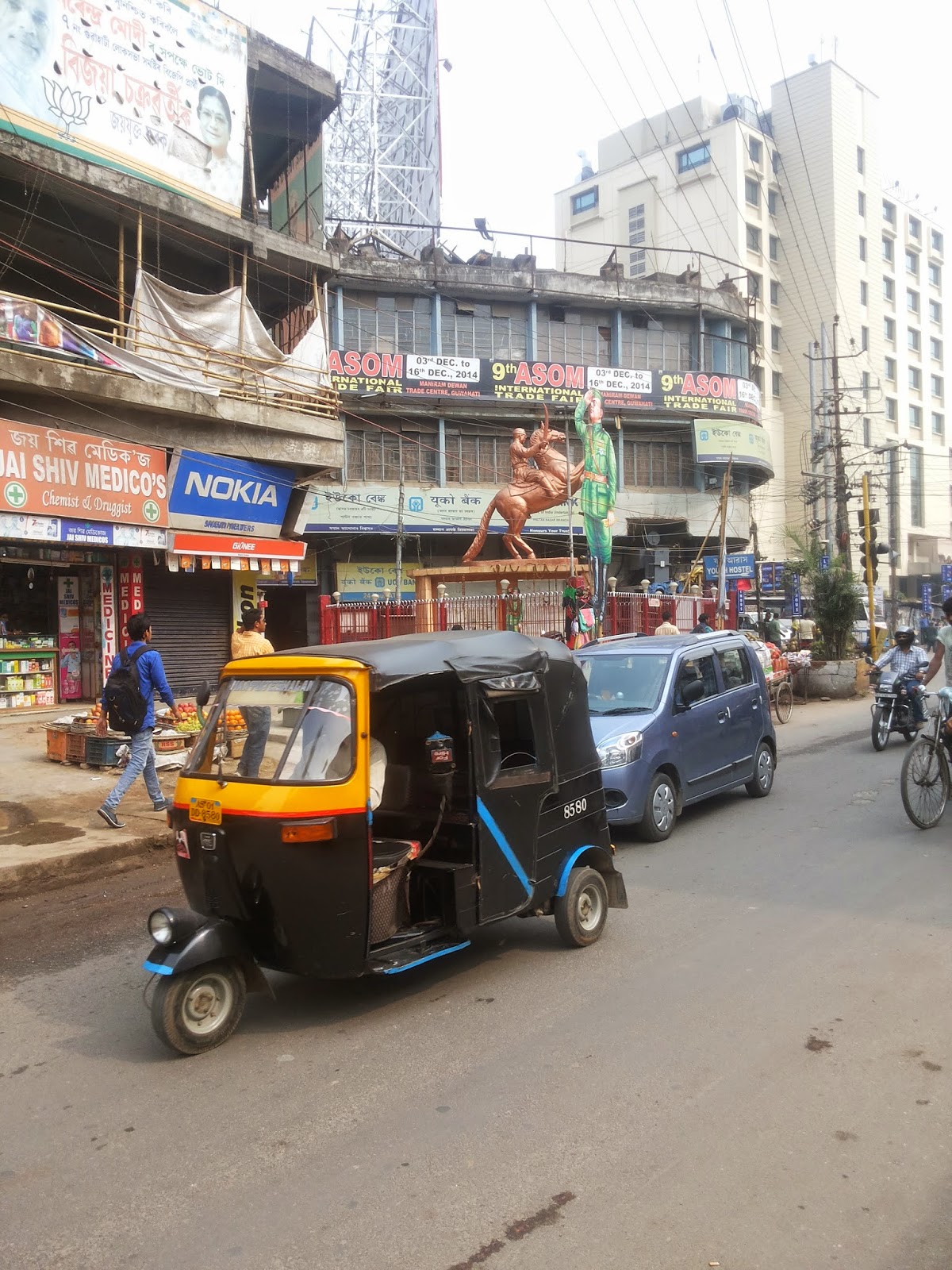 This is a statue in Paltan Bazaar, Guwahati, Assam, India. It’s rather asinine, actually, what with the drawn sword and the prancing horse, but it depicts the Second World War era Indian anti-British revolutionary hero Subhas Chandra Bose. 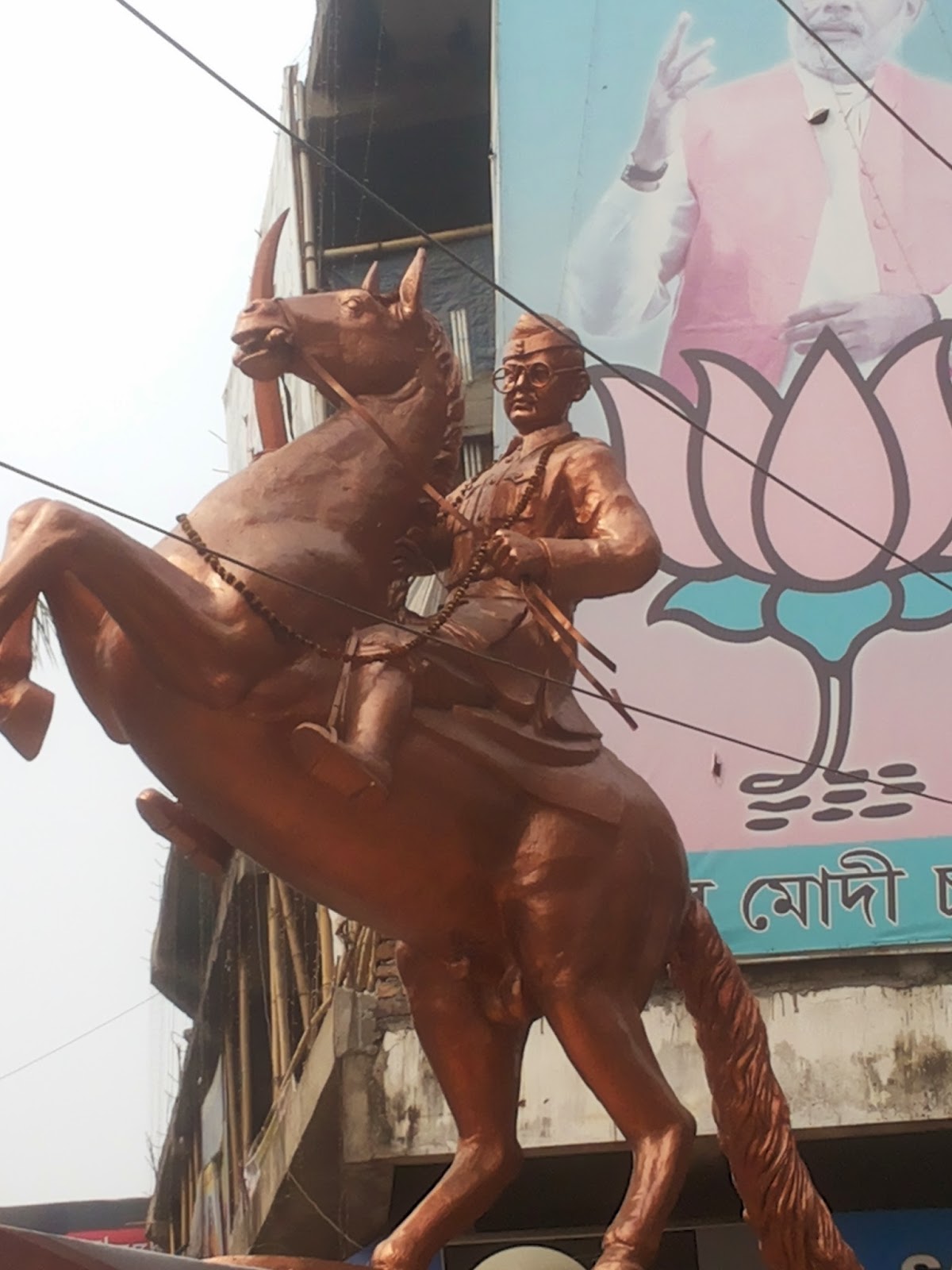 Who was Subhas Chandra Bose? This isn’t the place for a full biography of the man, but these are the basic facts of his life: he was an Indian nationalist politician in the first half of the 20th Century, from the Congress party. In the 1930s he went to Germany, where in 1937 he married his Austrian secretary, Emilie Schenkl, with whom he later had a daughter, Anita. Returning to India, he challenged – successfully – Mohandas Karamachand “Mahatma” Gandhi’s own candidate for leadership of the Congress Party. This infuriated Gandhi, a conniving, scheming politician if there ever was one, and he retaliated by forcing Bose out of the party. Bose then went on to form a left-wing socialist party, which still exists, called the Forward Bloc.

As the Second World War started, the British put Bose under house arrest. He escaped in disguise in 1941, managed to get to Afghanistan, where he was issued an Italian passport and using that made his way to Germany through the still neutral Soviet Union. There he helped organise an Indian Legion (Legion Freies Indien) from among Indian PoWs taken by the Wehrmacht – on the strict understanding that these troops would not be used in combat against the USSR, but only against Britain. In the event, the Germans never used them at all.

Meanwhile Japan had invaded and captured British-colonised Malaya, Singapore and Burma, and taken a much larger number of Indians prisoner. One Captain Mohan Singh from among them began recruiting for an Indian National Army (Azad Hind Fauj in Hindi, which translates into Free India Force, while the English name was the INA) from among them.

Another Indian nationalist in exile, Ras Behari Bose (no relation to Subhas Bose) who was in Japan and had become a Japanese citizen before WWII formally assumed command of the INA. In 1943, Subhas Bose travelled from Germany to Singapore via submarine, changing from a German U Boat to a Japanese sub in the Indian Ocean. On reaching Japan, Ras Behari Bose handed over command of the INA to Subhas Bose. By that time, though most of the PoWs did not join, enough troops had been found to equip two divisions. A third division was raised from ethnic Indians living in South East Asia.

In June 1944 the Japanese finally invaded eastern India. The first INA division took part in the invasion, and Bose himself briefly returned to Indian soil. However, though the INA’s officers were mostly dedicated and of a high order, a lot of the troops proved only too eager to re-defect to the British at the first opportunity, and the Japanese began using them merely as porters and line of communication troops. Field Marshal William Slim (Defeat Into Victory) contemptuously called the INA soldiers “Jiffs”. When the Japanese invasion collapsed, so did the first INA division. The second division was destroyed in early 1945 in the Irrawady battles in northern Burma, while the third, civilian-raised division, never got into action at all.

When Japan surrendered, by all accounts, Bose decided to fly to the USSR with his staff in order to continue the freedom struggle from there. On or about 18 August 1945, while on this journey, his plane crashed in Taiwan and he was badly burned, dying shortly thereafter. His ashes are now in Renkoji Temple in Tokyo. However, the Indian government to this day – despite the findings of several commissions of enquiry – officially refuses to admit he died there and then, and refuses to bring the ashes home. That’s a story for some other time.

If Bose had lived, it is absolutely beyond doubt that he would have been a nightmare for Mohandas Gandhi and his coterie in the Congress party. Not only was he an incredibly popular (my grandmother, who met him once in the mid-1930s, was still in rhapsodies about him sixty years later) and independent-minded man not beholden to any power centre, he was socialist, totally secular, and had nothing to do with religious divisions; his INA comprised troops from all religions and his aide de camp, Habibur Rahman, was a Muslim. Moreover, by the time the war was over, it was obvious that the British occupation was finished. Whitehall could no longer afford an Indian Empire. It was only a matter of time before the British left; when, not if. And if it came to a choice of Bose versus Gandhi’s anointed candidate for India’s leadership, Nehru, there is no doubt at all whom Indians would have chosen. Even according to a site which calls him a "fascist", Indians consider him,  allegedly after Gandhi, the greatest Indian politician of the 20th Century.

Bose would also have been a terrible problem for the Hindunazis of the Rashtriya Swayamsevak Sangh (RSS), who had taken absolutely no part in the freedom struggle, not even the farcical “non-violent” agitation launched by the Congress. As a secular leader who would have united all religions, he would have left no space for the Hindunazis to play their games and would more likely than not have crushed them ruthlessly. And under Bose it’s difficult to see how India could have been split into two nations at Independence. A united South Asian India – with no need to splurge titanic amounts into a bloated military – would have been an infinitely greater force in the world than it is now.

But today, India is ruled by the Hindunazi Bharatiya Janata Party, and the Prime Minister, Narendra Modi, was an active RSS member until fairly recently. And only a few weeks ago the government was caught trying to quietly efface the words “socialist” and “secular” from the Preamble to the Indian Constitution.

So here’s another look at the statue I saw in Guwahati. There’s Bose, on his horse, and never mind whether he ever actually sat on a horse. 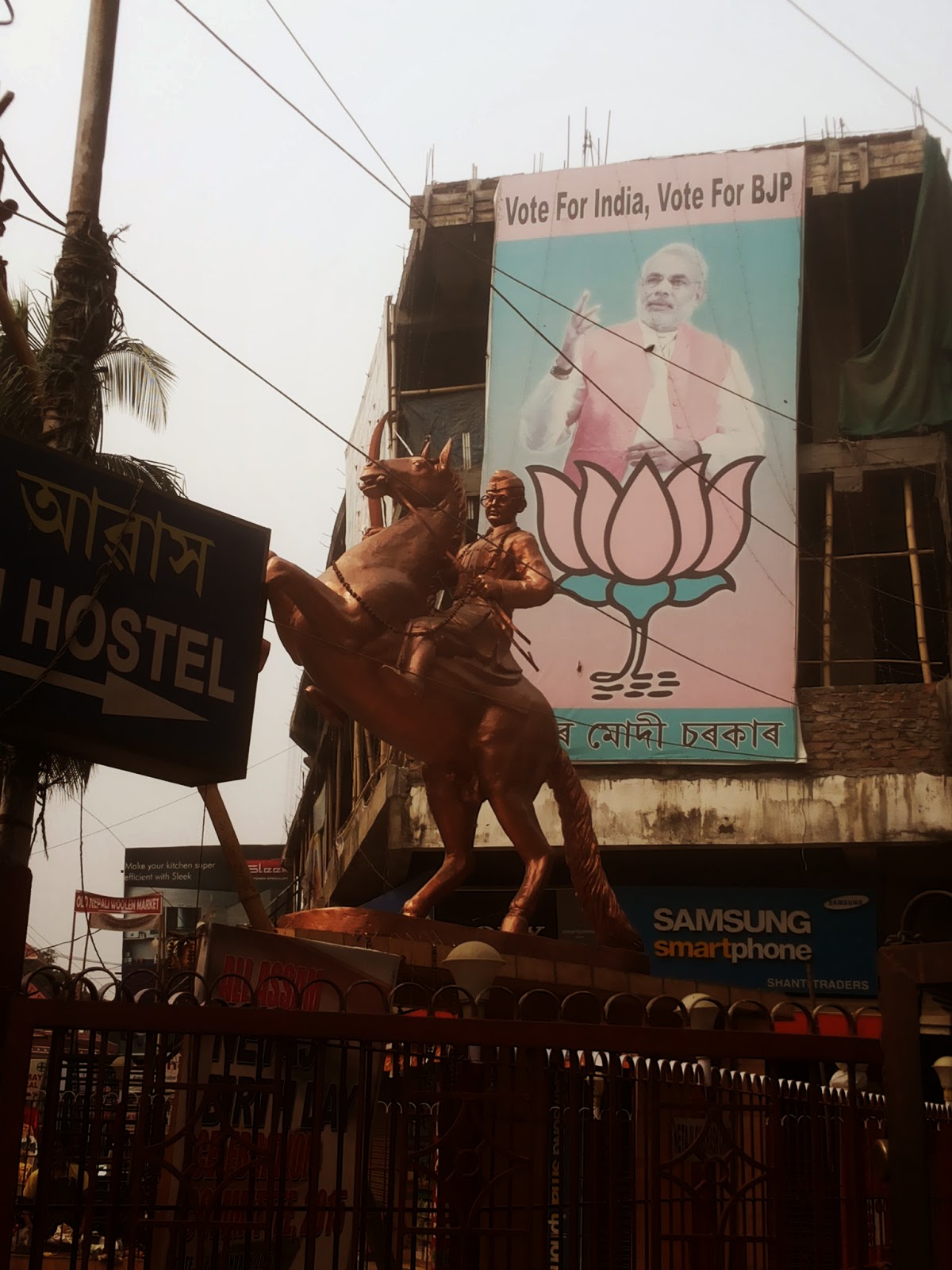 And there, behind him, dwarfing his statue, is...a poster of Narendra Modi.

Yes, that’s a good idea of what today’s India is like, one where the fascism and its brother-in-arms, corporatism, rule, and dwarf the old secular and socialist values, where tawdry posters of self-serving politicians tower over people who gave their lives standing up for what they believed in. It’s a sad commentary.

But there’s a glimmer of hope. Take a look at the poster; how it’s faded and burnt by the sun, while the statue is still looking good as new. One can still hope that in the fullness of time the Hindunazi tide will recede, and the values of the guy on the horse will triumph over the “values” of the one hanging from the wall.