We Indians are world champions at inventing feelgood crap about ourselves.

I’m not joking; even the Americans, for all their industrial-strength hypocrisy and mythology-making, are nothing to us.

Email forwards and, these days, WhatsApp messages are crammed to the brim with forwards mythologising alleged Indian accomplishments, and sent along further without the slightest attempt at verification.

Some of these have been passed around for so long that they’ve achieved almost semi-official status and can even be found framed and hanging on government office walls. For instance, while I was working for the air force I remember coming across the claim (which I once called the greatest joke Indians have ever thought up) that India has “never invaded another country in its ten thousand years of history”. Another equally pernicious claim is that 36% of NASA scientists are of Indian origin, as are 38% of American doctors and 34% of Microsoft employees.

Now, of course, this is not true. And, if it were, it would have been a profoundly negative statement on the conditions of this country, which produces scientists and engineers who leave to work for the most evil empire in the history of the world.

But Indian feelgood forward factories don’t give a damn for thoughts like that.

Now, at this time, there are floods going on in the state of Kashmir. Yesterday, in the morning, I got sent this photo, with a claim that it shows Indian soldiers evacuating trapped civilians by making a bridge with their bodies. 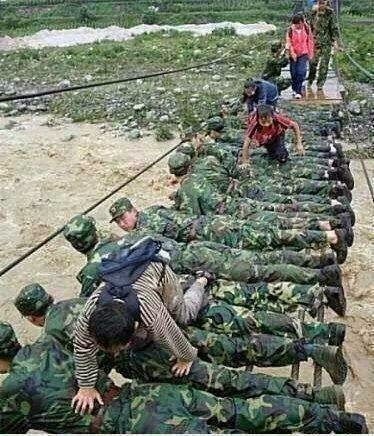 Now, not only am I suspicious of any and all feelgood forwards regarding India, I’d recalled that this photo wasn’t new to me. Sure enough, last year when there had been floods in the state of Uttarakhand, one of two things happened: either the same soldiers, in the same postures, rescued the same civilians there as well, who were dressed identically and photographed in the same poses, or...

Or,  the same photo was used then as well.

And ten seconds’ Googling proved it was.

Of course, that didn’t mean anything either, since reused feelgood crap is merely feelgood crap warmed over, so I did thirty seconds’  further Googling, based on the uniforms and the appearance of the people, and,,,

In fact, not only did I find the source of the image, I even found the video from which it was taken.

So, I passed the links and the information back to the person who put up this photo on my college’s alumni group. This morning, he finally replied, in these words:

“(Bill), you should not have any doubts in anything nayional (sic) interest.”

I responded in these words:

“So, spreading lies is in the national interest, is it? I’d rather be an anti-national then.”

But I’m a card-carrying traitor anyway.

Email ThisBlogThis!Share to TwitterShare to FacebookShare to Pinterest
Labels: idiocy