Why the Dinosaurs Disappeared: The Truth the Evolutionists Don't Want You To Know

The day the Apostles decided to hold their dinosaur race, Jesus wasn’t in the best of moods. His favourite triceratops, Kenham, had an upset stomach and Jesus had had to perform a full third of the day’s quota of miracles to heal the beast in time. And even then, Kenham rumbled and grumbled and broke forth with sour smelling eructations at unpredictable intervals.

“Not going to be a good day,” Jesus decided, and wondered if there was still time to somehow call off the Apostolic dinosaur races.

There wasn’t. Jesus discovered this as soon as he arrived at the Garden of Gethsemane, where the dinos were already lined up in racing order. The Apostles hadn’t even bothered to wait for him to turn up before getting ready, but then they hadn’t been as respectful recently as they should have been. First there was that episode with the wine, where the entire wedding party had got so disgracefully drunk and created a scene, and then that Lazarus, who almost caused a zombie outbreak before being quietly put down, and then...

Jesus sighed. Despite himself, he agreed that he might have managed the miracles better. Not thinking things through, that was his problem. That time with the pigs in Gadarene, for example, and the ruckus the owner had raised’ Jesus had to placate him with over half a day’s worth of miracles and had none left to conjure up some supper. And the other time with that fig tree which he’d punished for the crime of not bearing fruit out of season...even he was ashamed of himself when he thought of that one.

All right, then, he thought glumly. Clearly there was to be a race after all. Now what?

Clearly, Kenham was not going to win at his current level of fitness – not with his stomach still bubbling and growling, and releasing foul-smelling effusions from both ends. But it equally wouldn’t do to let any of the Apostles beat Jesus; the simmering power struggle would come right to the boil. And in his current state, Kenham would likely come in last, even behind Batholomew’s lame Albertosaurus Kurtwise, and that would never do.

Now, normally, of course, the race would be fixed, since all the Twelve knew well enough to let Jesus win, and the actual race was for the Number Two spot. But this would actually work only with careful speed adjustment so none of the others would actually overtake Kenham, who wasn’t the fastest dino at the best of times, and yet wouldn’t lose out to anyone else. But with Kenham in his current state, they’d have to crawl at a speed so embarrassingly slow that Jesus could think of several snails which might win the race instead.

Should he sit it out this once? But he’d never done that before, and what excuse could he give? They’d probably think he’d been out drinking (as well as doing other things) with Mary Magdalene again and was too hung over to race. He'd already heard dark mutterings about one rule for him and another for everyone else.

The problem was acute. It was so acute that Jesus sat astride Kenham, scratching thoughtfully at his beard, until a sudden deep belch from his mount jogged him in the saddle. Then he reached up to scratch his head.

“Well?” Simon called, hauling irritably at the reins of his stegosaurus. “An itchy problem, Rabbi? Or is it just lice?”

Glaring at Simon, Jesus suddenly came to another of his impulsive decisions. “All right,” he snapped. “I’m coming.” With a furtive hand gesture, he pushed another third of the day’s miracles into the dinosaur, giving him a turbocharge that Jesus himself could feel in his thighs and the small of his back.

"Just enough left for one more miracle," he thought. "But it ought to be enough."

He wasn’t quite unobserved, Jesus knew. Thomas, for sure, had seen the gesture and was hiding a little mocking grin in his beard. But then that was only to be expected. Thomas was a dangerous freethinker, and Jesus sometimes thought he should expend an entire day’s worth of miracle to drive some faith inside his sceptical head. But, equally, Thomas would keep his mouth shut, Jesus knew. With an impatient shake of his head, he yanked on the reins and pulled the triceratops into line.

The race did not go well. Jesus knew almost from the start that it would not go well. The turbocharge, instead of making Kenham faster, merely seemed to make the triceratops skittish and aggressive. He even tried to hook Kurtwise when the lame Albertosaurus ventured too close. And then he reared on his hind legs and damned near bucked Jesus right out of the saddle.

In fact, the race was a disaster. Jesus came in third from last, just ahead of Kurtwise and Philip’s ankylosaurus, which was so heavily armoured in any case that it couldn’t run at all.

“What the hell was that about?” Jesus snapped. “I’ll grant that it wasn’t like you weren’t trying at all. No, it was like you were actively trying...to lose.”

“Course I was,” the triceratops rumbled back. "You just try racing someday with a stomach full of gas and see how you like it.”

“So you sabotaged the whole race and now Judas thinks he’s better than the rest of them, and Simon thinks he’s going to make a push to take over when I’m gone, and there’s a civil war waiting to break out, and all because you had a bellyful of gas?” Jesus glared down at the dinosaur. "As soon as I'm gone, they'll be at each other's throats. If I know Simon, he'll go after Judas, probably with something defamatory. As for the rest..." He swallowed. "I can just see them hijacking my legacy and making a hash of it. And all because you had gas."

“It’s your fault,” the triceratops retorted belligerently. “Nobody put a knife to your throat and made you think of dinosaur races. Dino races, forsooth! You think I want to run when I don’t have to?”

“Why not? Dinos don’t exactly want to run for fun.”

They were passing a trail along which some merchants were driving along a line of donkeys. “You don’t want to run, do you?” Jesus asked. “In that case how are you dinosaurs better than...than those donkeys there? I see no difference at all!”

He made one of his impulsive gestures. There was a brief silence.

“Hee-haw,” said the small brown donkey which had been the triceratops.

Jesus looked at the donkey. The donkey looked back at him and twitched its ears.

The donkey said nothing.

“I’ve used up all the miracle power for today,” Jesus said in a small voice. “I’m afraid you’re stuck being a donkey. But think positive – nobody ever heard of donkey races, did they? At least not yet.”

“Hee-haw,” the donkey said, and twitched its tail.

And that is the true story of how the dinosaurs vanished from the world. Of course it left a huge ecological hole.

But there was a sudden glut of donkeys everywhere, so that was quite all right. 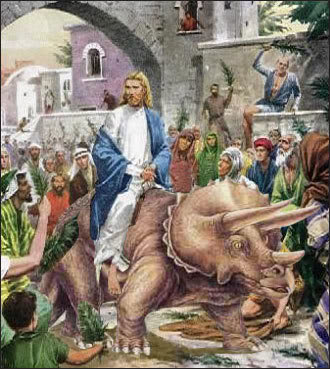