I caught a vampire in the hay
Hiding from the light of day.
Dragged it out by the tail
Was about to stake it with a nail.
The vampire cried begging please
Until its voice began to wheeze
A drop of blood here and there
Said it couldn’t live on air
And what’s one drop of blood to
Such bags of it like me or you?

I glimpsed a vampire in the trees
Flapping around in the evening breeze.
Went right back there with my gun
Thought shooting it might be fun
The vampire hung upside down
Looking like a tattered evening gown
Begged me to just let it be
Said it was no threat to me.

I found a vampire in the snow
The wind making flurries blow
I was coming over the hill
Thought to crush it to a pill
The vampire squealed my oh my
It said it didn’t want to die
And without a nice neck to suck
That vampire was one dead duck.

I saw a vampire in the moon
Shining like a silver spoon
It called to me down in the city
Swimming in the Sea of Tranquillity
Said Armstrong gave it a ride
All unknowing on Apollo’s outside
And in the evening when the moon is red
That’s when that vampire’s thirst gets fed.

I met a vampire in the house
At first I thought it a mouse
It came crawling out of bed
And roosted on the ceiling overhead
Said it wanted refuge nothing more
It used to live with a whore
But all she ever did was f*ck
No time to give her guest a suck.

I fished a vampire from the sea
That became fast friends with me.
It changed its home from the wave
To roost in a fresh open grave.
There are worst things than it by far
Famine and drought, disease, war
What’s a vampire or ghoul or two?
What’s one drop of blood to you?

So if you get a vampire in the room
Don’t run to get garlic, crucifix, broom
In order to smash it, swat it flat –
Just think of it as a harmless bat
One of the creatures that share this earth
With us, of so much lesser worth.
Vampires, like wolves and bees and whales
Don’t destroy nations with made up tales. 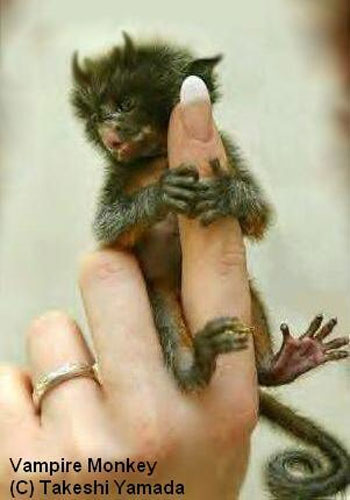