A Lot of Trouble

Consider this situation: you have a daughter, whom you love very much and have tried to bring up to the best of your ability to be a model citizen.

Now, suppose you have a friend, and a gang of malefactors attempts to assault him. Would you, in order to protect this friend, offer the gang your cherished daughter as an alternate victim? Would you consider yourself justified in doing so?

Now, how would you like it if this daughter went out and slept with a man, under false pretences, for the explicit purpose of getting pregnant by him? Suppose she drugged him without his knowledge in order to remove his personal inhibitions against having sex with her. Would that be a morally justifiable act on her part?

Good. I can see we agree here.

The point is that in both these cases, the parent and the daughter would have behaved in ways directly contravening conventional morality – our sense of what is right or wrong. Whether you’re black, white, yellow or purple, and whether or not you believe invisible aliens sit inside your TV and broadcast mind-bending orders, the kind of behaviour I just outlined is by definition unacceptable to just about anyone you care to name. Right?

Well, then, let’s look at it from a slightly different angle.

As you all know, or as you all should jolly well know by now, I am an atheist. And, yes, as I believe I have mentioned once or twice in the past, we evil, baby-eating, Devil-worshipping atheists have feelings, too, and sometimes we get annoyed. For instance, this atheist gets annoyed when he’s told, over and over, ad nauseam, that atheism means an absence of morality.

How can anyone know what’s good or bad without religion, the atheist is asked. Morality is intrinsic in religion, and in religion alone.

Once there was a word, and the word was YHWH, which for some reason is pronounced Adonai, not that it matters. Now this YHWH was a God, and he (it must have been a he, because YHWH wasn’t really all that kind towards females) was seriously angry with the inhabitants of two cities, Sodom and Gomorrah, who among other things had gay sex, which was something that angered YHWH out of all proportion (along with children talking back to their parents and collecting sticks on the Sabbath, and so on and so forth).

So YHWH decided to eradicate Sodom and Gomorrah from the face of the Universe, and to this end called into service intercontinental ballistic missiles filled with fire and brimstone. But there was a righteous man in Sodom, one Lot, a nephew of Abraham – the same righteous and pious Abraham who almost turned his son into a burned offering, and who also kicked out his pregnant concubine to die in the desert. This Lot lived with his wife and a pair of virgin daughters, and YHWH decided to spare this quartet from becoming collateral damage.

So he sent a pair of angels, in human form, to Lot, to warn him to get out while he could (why not just, you know, magically appear to him and tell him? Who knows.). These angels were planning to spend the night in the street, but Lot met them, and being a busybody, Lot invited them into his house. Scarcely had they come in, though, than the men of Sodom came crowding round the door, demanding that Lot send out his visitors so that the Sodomites could, uh, sodomise them (no, I am not making this up – man, those Sodomites must have had some serious sexual starvation). Well, if I were those angels, I’d probably have had myself (myselves?) magically made HIV positive and given it all to them, but then that’s just me.

What happened was that this pious and righteous man, this Lot, went out to plead with the mob besieging his house. He begged them to leave his visitors alone, because they were under the shelter of his roof. But, no, he didn’t stop at that – he offered to send out his virgin daughters, who “had never known a man”, and the mob could do with them whatever they wanted.

Some morality, this. Some righteousness!

Apparently the mob had slightly higher morals than Lot himself, because they rejected the offer of the innocent – well, we’ll get to discussing that “innocent” part by and by – daughters, and insisted Lot send out those angels to be anally raped. (In passing, please note that none of this would have happened if Lot had allowed the angels to spend the night in the square as they had wanted, instead of thrusting his hospitality on them.) In the event, the angels saved the situation, and the daughters’ virginity, by striking the mob blind so they could not find Lot’s door. They then announced that YHWH was about to bring down holy hell on Sodom and Gomorrah, and Lot and his family and chattels should quit town while they could. The daughters had fiancés, who may have been put off by Lot’s offering up their future wives’ virginities on a platter to the crowd. At any rate, they refused to accompany Lot, his wife, and daughters, and these four refugees left Sodom in the morning and struck out across the plain, being solemnly warned by the angels not to even so much as look back.

Well, then, the divine ICBMs brought down their thermonuclear punishment on the cities and turned them, and all they contained, and even the (presumably blameless) vegetation of the plain into ash. It must have been a pretty grand sight, very newsworthy – what a pity TV hadn’t been invented yet. Anyway, Lot’s wife, that poor weak-willed woman, looked back over her shoulder at the destruction of all she had ever known, and YHWH, annoyed at this temerity, converted her into a pillar of salt.

I told you he wasn’t all that fond of the ladies.

Anyway, after a while, Lot and his two daughters (none of whom are recorded as having mourned their lost homes, friends and neighbours, spouse and fiancés) ended up living in a cave on a mountainside. There, the girls apparently found their hormones surging, and being nice and heterosexual (homosexuality being anathema in the eyes of YHWH) decided to seduce the only male present – their dear old dad. Oh, wait, they didn’t want to sleep with him to satiate their sexual lusts, but for properly religious reasons: they wanted children to carry on their family line.

Ooh. Utterly moral, am I right?

So here’s what they did: since Lot’s pious respectability apparently didn’t prevent him from drinking himself into a stupor, they plied him with wine, until he was too drunk to know what he was doing but not too drunk to get it up. And then the older daughter slept with him and got nicely pregnant, first time out.

The next night they repeated the performance with the younger daughter, and she too got pregnant, and between the two of them, these incestuous little vamps gave birth to the Moabites and Ammonites, whoever they might be. (I assume these Ammonites  aren’t the mollusc fossils with spiral shells).

And these people – this callous parent and his manipulative, incestuous daughters – were moral in the eyes of YHWH, and he spared them.

Now think of all that, and then let's see you accuse us atheists of inherently lacking morality.

(Yes, I’m aware that one doesn’t have to necessarily accept everything in a holy book; but what does one accept and what does one reject? On what basis does one choose what is holy and acceptable, and what is, presumably, equally holy but not acceptable? And why are we atheists accused of lacking morality when we simply form our own value systems instead of cherry-picking material from books written hundreds to thousands of years ago and mutated many times over the centuries?)

Of all Lot’s family, the only one I have any sympathy for is Lot’s wife. The only sin the poor woman committed was looking back over her shoulder, and for that she got turned to a pillar of salt. And then, I suppose, the rain came, and she melted all away. 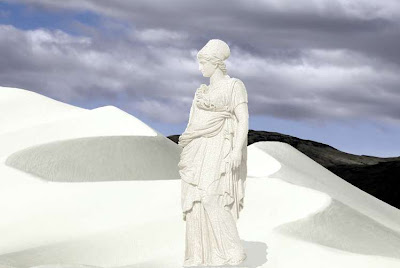