As I’ve said on occasion, I’m more than a little tired of American holidays being stuffed down the collective craw of the rest of the world – like, oh, turkey, for example – so this year I was planning to invent a holiday of my own to mark the occasion, as a kind of protest.
But then, being naturally lazy, I let the idea slide. I mean, you need something to celebrate when you invent a holiday, right? And what the hell is there to celebrate these days, unless you’re an imperialist warmonger, in which case you can pretty much celebrate 24 hours a day, 365 days a year anyway?
All right, so to get back to the point, I was looking for something to celebrate as a kind of antidote to Thanksgiving, and I believe I have found it.
Today, in New Delhi, one of India’s most loathsome politicians (and to stand out in that crowd, one has to be peculiarly awful), Sharad Pawar, got his.
One of the things that makes me reluctant to write at length on Indian topics is frankly how I have to lay out the groundwork and explain the background each time, every time. Still, I believe I haven’t mentioned Sharad Pawar before, so here goes.
Sharad Pawar, who holds the post of Agriculture Minister in the Indian government, is the chief of a political party called the Nationalist Congress Party (NCP), an ally of the Congress Party in the right wing coalition which (mis)rules India at the moment. He is also an ex-member of the Congress party who left to form his own outfit in order to get a bigger share of Pawar, er, power, and then came right back and allied with his own former outfit to get that power. Who says politics doesn’t make strange bedfellows?
Oh, and Pawar is a disaster from whatever way you look at it. As Agriculture Minister, he’s sat back and watched as millions of tons of grains rot in stockyards (hint: link to an article by me) while people starve in the villages. He’s exported food while domestic prices rise through the roof. He’s also spent more time politicking in the cricket establishment (cricket in India is a lucrative business, awash in slush funds, and only incidentally a sport) than in running his ministry. But he can’t be sacked from his post, because the Congress needs the support of the Nationalist Congress to stay in Pawar, uh, power (sorry, can’t resist making that pun over and over), and keep on with its own agenda of sucking the nation dry.
Today, one Indian finally had enough.
A young Sikh called Harvinder Singh, a transporter, caught up with Pawar in New Delhi and landed a nice hard slap on his obese cheek. (Can you tell I’m happy? Oh, you can? Good.) 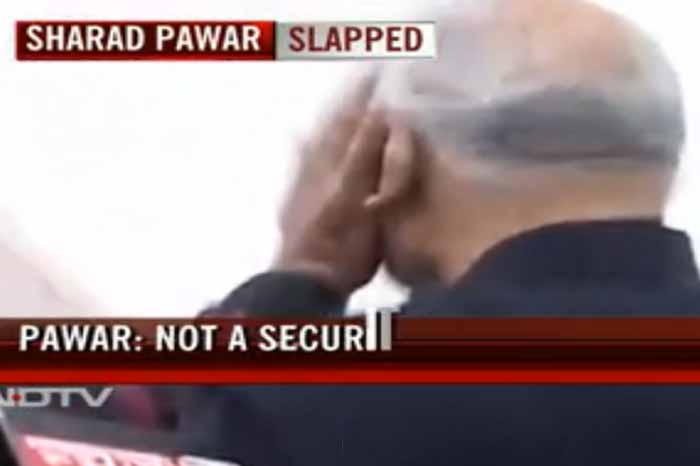 Singh was beaten up and taken to prison, but his act’s fired the imagination of the people, as you can see by the responses to this article here (I’m there too, being my usual Grammar-Nazi self).
Let’s look at that slap one more time shall we? Here you are: The political class, even those who can’t stand Pawar (meaning pretty much everyone, even his allies) have closed ranks around him, obviously from simple fear. The refrain is the same – condemn this evil senseless act, yada yada. Perhaps they remember Martin Niemöller, and are modifying his words slightly:
First they slapped Sharad Pawar, and I didn’t say anything because I was not from his party
Then they pulled the pants off Manmohan Singh, and I didn’t say anything, because he’s on the way out anyway
Then they kicked out the Gandhi dynasty, and I didn’t say anything because I thought it would clear my way to power and wealth
Then they replaced me by a people’s government, and there was nobody left who would say a word in defence of me.
How I wish.
The most ludicrous response, even by Indian political standards, came from the Congress. It put the blame on the Hindunazi Bharatiya Janata Party (BJP; the name means “Indian People’s Party”, which sounds like a leftist group, but isn’t). In a rare display of sense, the BJP had warned a couple of days ago that people’s anger would boil over and they’d “come down to the streets” unless corruption and rising prices were addressed. Apparently, the BJP is responsible because its warning instigated Harvinder Singh on his mission to slap the crap out of Pawar.
And here we come to the anti-Thanksgiving holiday I mentioned. I propose that we Indians henceforth celebrate the fourth Thursday of November as National Slap a Politician Day.
Look at all the advantages:
1.     It gives us a legitimate reason to celebrate, one that doesn’t involve the murder of innocent poultry;
2.     It’s in a perfectly good cause, one any sane individual can get behind regardless of political leaning; and
3.     Since our nation is now cravenly pro-American, and utterly in thrall to anything and everything that happens in the Empire, it needs a holiday to coincide with Thanksgiving, and this provides such an opportunity.
All right, so there you are. Your brand new holiday, courtesy Bill the Butcher. No charge.
You can bow in gratitude to me now.
Posted by Bill the Butcher at 9:10:00 pm