The Battle of Tsushima 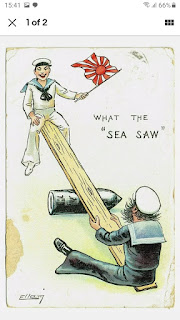 You're perhaps wondering what that postcard above is about.

In 1904 war began between the Tsarist Empire and Japan over who got to colonise and bully China. The Russians had a naval base at Port Arthur (now a Chinese city, Lushun). The Japanese launched a pre emptive naval attack on it, without a declaration of war, which trapped most of the far eastern Russian navy in the port (this was exactly what the Japanese again did in 1941 at Pearl Harbour, but in 1904 Brutain and Amerikastan praised it as a masterstroke). The corrupt and incompetent Tsarist regime sent court favourite generals and admirals to fight the war. Its troops were mostly illiterate, low on morale, and they saw that they were fighting a war for colonial aggression and not to defend Russia. The Russian naval ships hardly even put out of harbour, and their only competent Admiral was killed when his ship hit a mine. Soon the Japanese had surrounded Port Arthur and were shelling it.

In late 1904 the Tsarist regime decided to send a fleet to attack the Japanese ships blockading Port Arthur so that the Russian fleet trapped in the harbour could get out and the siege broken. The only fleet possible to send was in Kronshtadt naval base at St Petersburg in Europe, very very very very far from Japan and China. The Japanese admiral Heihachiro Togo was an extremely brilliant tactician, and had good fast Brutish built battleships. To beat him the Tsarist regime cobbled together a fleet of every ship that it could send, from ancient cruisers to "modern" battleships of the Borodino class, that you see in the photo at the end of this article. The Borodino class is known as one of the worst types of warship ever launched because it had cannon in side positions (called casemates) on the hull. If the ship tilted to even a limited extent water would enter through the casemates and flood the hull. Besides, the Japanese had a much better sighting and fire control system, their shells had more explosive content, and their training was much better. Apart from that they were in a location near to their own ports and could easily resupply and maintain their ships.

In order to command this fleet, the Tsarist regime appointed one Admiral Zinovii Rozhestvenskii, whose qualifications were that he was a favourite of the Tsar. The various components of the fleet had other lower ranked admirals in command, only one of whom, Folkersam, was competent. Unfortunately, Folkersam was also dying of cancer. On top of all this the Brutish, French and Amerikastanis were all united against the Russians and refused to supply coal or maintenance facilities.

This fleet steamed out of St Petersburg in September 1904, with rumours going around that it would be attacked by Japanese torpedo boats based in Brutain. In the English channel, at night and fog, the ships saw Brutish fishing boats and opened fire on them, sinking a couple and even managed to damage a couple of their own ships by friendly fire. This is called the Dogger Bank incident and Brutain took the opportunity to threaten to join the war on the Japanese side and demand reparations.

At the Straits of Gibraltar Rozhestvenskii sent part of his fleet through the Mediterranean and the Suez Canal and took the rest down the west coast of Africa, past the Cape of Good Hope, and then waited at Madagascar for the Suez Canal group to catch up. His officers in the meanwhile acted as tourists at every stop, and he made absolutely no attempt to train in fleet manoeuvres and almost no attempt to train at gunnery. Fleet manoeuvres were vital because at that time fleets fought as units, not individual ships. The whole fleet would direct its fire at a particular part of the enemy fleet at one time to try and destroy it so they had to act as one. But Rozhestvenskii made no attempt to do this. Also while all the waiting was going on the ships were getting their hulls fouled with algae and barnacles, slowing them down.

From Madagascar the fleet went across the Indian Ocean, past Singapore, and then again waited off the coast of what is now Vietnam. Why? Because the Tsar had sent yet more ships, all older and even slower, to join the expedition. And finally it began steaming North up the coast of China towards Japan.

By now the whole point of sending the fleet was over anyway because Port Arthur had surrendered, along with all the ships in the harbour, so the orders were to break through to Vladivostok. And also Folkersam died of cancer, but in order to prevent demoralisation Rozhestvenskii kept it a secret from his fleet. Not even the ship captains of Folkersam's part of the fleet, which was supposed to take orders from him, knew that he was dead.

This was the state in which Rozhestvenskii finally, on 26 May 1905, approached Japan. Togo had already replenished and maintained his fleet, and of course knew that Rozhestvenskii was coming and approximately when he would reach the area.

Now Rozhestvenskii had three ways to get to Vladivostok. The first and most direct way was between the Chinese coast and Japan by the Tsushima Strait. Further north, there were the Tsugaru Strait between Hokkaido and Honshu islands and La Perouse Straits between Hokkaido and Sakhalin islands. To use these Rozhestvenskii would have to steam east of Japan and then turn west, which would be longer and slower, but also had much less chance of running into Togo's fleet. Togo guessed that Rozhestvenskii, being lazy and incompetent, would use the direct Tsushima route and therefore put all his fleet there. He was also using radio, something very new at the time, while the Tsarist fleet was still restricted mostly to signal flags.

A Japanese ship soon found the Russian fleet at night, because the Russian fleet was - in a war zone - using navigation lamps as in peacetime. By radio it called in Togo's fleet and by the next afternoon, 27 May, the two fleets met.

Rozhestvenskii was of course totally incompetent and his fleet couldn't even manoeuvre. It was steaming in column, and didn't even manage to get into position side by side (in line abreast), so Togo's fleet - steaming in line across its route - could concentrate all their fire on the foremost Russian ships. As soon as those were sunk, Togo attacked the next foremost Russian ships and sunk them, and so on until nightfall. As soon as darkness fell Togo withdrew his battleships and sent in his torpedo boats in a massed attack. By the next morning the Russian fleet was scattered and fleeing for its life. A few ships fled for safety to Manila harbour in the Philippines. Several, including Rozhestvenskii's ship, surrendered to Japanese ships (the last time in history one fleet surrendered to another on the high seas). And only two ships managed to get through to Vladivostok.

Rozhestvenskii and his officers were held as prisoners in Japan and repatriated later in 1905. Though they expected to be shot for treason the Tsarist regime did nothing.

That was the end of the Russian navy. To this day, 115 years later, Russia has never had a real navy. The navy has always been an afterthought, subordinated to the army and the VVS (air force).

The Russian ships captured by Japan were repaired, modernised, and put into service in the Japanese navy. At the start of WWI, when Japan and Russia were on the same side, some were sold back to Russia. Togo was made a marquis and his flagship is still preserved to this day as a museum ship in Japan.

And this is just a symptom of the real disease, Tsarist corruption and incompetence. And yet the neoliberal capitalist Putinist regime in Russia nowadays extols the Tsarist system, grovels before the bearded apes of the Russian Orthodox Church, and pretends that the last Tsar, Nikolai II, is some kind of Saint.

Pictured: Russian battleships, in column, being massacred at Tsushima. The Japanese lost two torpedo boats; the Russians lost almost everything they had. 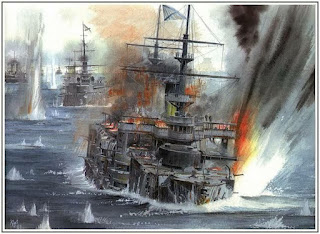