2017 was such a year. While its inglorious predecessor, 2016, seemed to drag on and on and on with no intention of ever ending, 2017 seems to have receded into the past while I was still trying to get used to the damned thing.

This is not to suggest that 2017 was a particularly good year. It was beset by endless troubles – equipment failures, never ending financial problems (which prevented me from taking any kind of holiday whatsoever; I only left town on one occasion, for a few hours, to attend my assistant’s wedding) and health problems. This last thing was particularly dire. I had numerous episodes of musculoskeletal pain, particularly of the back and elbows. I also had typhoid in early September which lasted over a month before the blood tests showed it was cured.

Have you ever had typhoid? I would not recommend the experience. Agonising headaches, fever of 40°C, wrenching cough and weakness and dizziness. Besides, the antibiotics that used to be effective for it are now largely useless, because of bacterial resistance. Oh joy.

Someday I really must go into this business of bacterial resistance in detail. Especially because it’s rampant now – and specimens think that it’s the doctor’s incompetence, not the medicine’s ineffectiveness, that prevents the instant cure they expect.

Health problems also affected my babies. Nero, who is over a hundred in human terms, but until this year was very healthy, had recurring problems in mid year. First he began to limp badly, and couldn’t walk properly. His back paws were infected, with swollen pads and oozing. The antibiotics the vet gave cured the infection, but resulted in diarrhoea with blood-red stool, and he almost stopped eating. The pathology examination showed there was no blood despite the appearance, and after that he rapidly recovered for a couple of weeks – only to have severe diarrhoea again. This time ordinary diarrhoea medicines cured him. He is now on rheumatism tablets, permanently, but otherwise in perfectly fine shape, and beats me up every night after I get back from work.

Juno, my other baby, had a toe infection, which abscessed and took weeks to heal. Then she had a mammary gland tumour that needed surgery. She, too, is fine now, and kisses me after Nero beats me up.

I had major problems with the clinic, something that stressed me out for over a year. I have been renting premises in a particular building for my clinic since 1999. Suddenly, in 2016, the building owners ordered everyone to vacate the building, because they were “planning to turn it into a hotel”. I had obviously nowhere to go, and even if I had, I’m established in that spot and built up my practice there. Also, legally, the owners couldn’t force me out – if I went to law. But, remember those financial problems? I could not afford to go to law.

To make a long story short, after many months of high drama, I got to keep my clinic, but was compelled to do an extensive, and expensive, remodelling project. It actually improved the clinic, a lot – but at the same time my rent more than doubled, while my income most certainly did not. I always get angry when I listen to idiots talking about how dentists are “rich”. Do they even have the slightest idea how much money it takes just to keep the clinic going? What with lab and equipment bills, rent, taxes, assistant salaries, and insurance, I spend well over 75% of what I earn simply to be able to go on earning.

In the creative field, I wrote much less than earlier years for the above mentioned reasons, but there’s another reason as well. To put it clearly, my readership is vanishing. I know of exactly five people I can rely on to read what I write. Five. In the early years of this blog I used to get at least fifteen or twenty, and back on Multiply of sainted memory, it would be a rare thing I wrote that would not get fifty.

In the meantime, the world around continued to go to hell. The Republic of Hindunazistan has now institutionalised vote-fixing, which means that it doesn’t matter a damn whom you vote for, Modi is going to win. And Modi’s followers have, accordingly, become empowered enough to commit murder in broad daylight, right on camera. They know they can get away with it.

What are the prospects for 2018? Good and bad. The zionazi pseudostate will continue oppressing Palestine, but it is digging its own grave. The Imperialist States of Amerikastan, I am convinced, will begin its final slide to disintegration. And India? As Modi’s misgovernance plumbs new depths, he will unleash his goon squads to crush dissent. And global warming will continue to get ready to kill us all.

I have saved the best for last: in 2017, I achieved two milestones: I got officially investigated for “terrorism” by the Brazilian police (no, you twits, that’s not police who check women’s Brazilian wax jobs – I mean the Sao Paulo police in the employ of the kleptocratic Temer coup regime). I also got officially investigated by Indian army intelligence, for what reason they themselves might know, but I don't. Unfortunately, neither set of louts found anything to pin on me.

So, here are my two most famous creations wishing you a happy 2018. And hopefully you’ll start reading me again, and giving me some incentive to write. 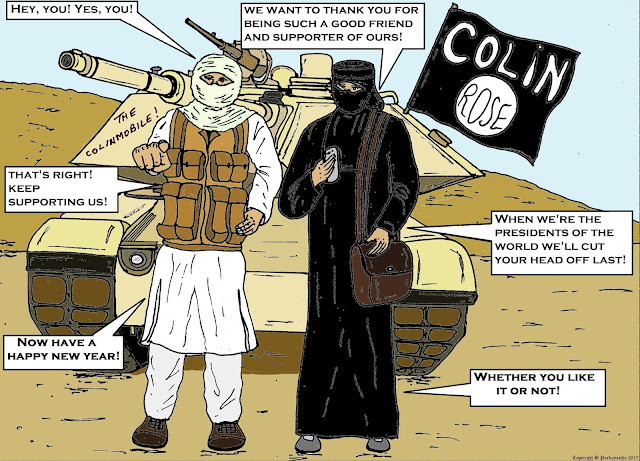