Two days after the atom bomb was dropped on Hiroshima, and in accordance with the Yalta agreement, the USSR declared war on Japan and invaded northern China, the Japanese puppet state of “Manchukuo”, and Korea. This act, it has been persuasively argued, was far more devastating to the Japanese war effort than the two atom bombs, and was the single precipitating factor that forced Japan’s surrender.

The vaunted Japanese Kwantung Army – the largest and most prestigious of all Japanese army groups – shattered like porcelain before the Soviet onslaught. As the Japanese forces in China dissolved, and the world war ended, two other wars began. One was the Chinese Civil War, which had been interrupted by the Japanese invasion a decade earlier but now broke out again in full force. The other was the Cold War, which – as anyone knows, and all pretences otherwise notwithstanding – is still going on to this day.

That is history. But there is much more to history than just the headlines.

The Japanese war crimes in China and Korea are among the most astonishingly underreported and unknown things about the Second World War. As the Japanese advanced through China in 1937, raping, killing, and destroying (not necessarily in that order) everything in their path, they began an odyssey of sadistic violence which far exceeded in cruelty and numbers anything achieved by the Nazis in Europe outside the USSR. A quarter of a million civilians were massacred in Nanjing after the Chinese capital had fallen. The entire Korean peninsula was turned into a source of slave labour for Japan, administered by Korean turncoats. The Japanese medical experiment centre, Unit 731, murdered more people, in more depraved ways, than the German Nazi doctors like Josef Mengele (“the Devil Doctor of Auschwitz”) ever did – and got away with it, in fact being rewarded with positions in US universities in return for handing over their experimental data.

There is an excellent reason why to this day if there is anything China and the two Koreas agree on, it’s their mutual hatred of Japan and their determination that Japanese militarism must never be allowed to raise its head again.

And yet to this day Japan, while acknowledging its war crimes against Western prisoners of war* does not admit or acknowledge what it did to its fellow Asians. And for some reason that undoubtedly has absolutely nothing to do with Cold War imperatives and anti-Korean/anti-Chinese strategy, the West has never attempted to compel it to.

[*In The Other Side Of Tenko, his memoir of life as a Japanese prisoner of war from 1942 to 1945, Len Baynes specifically mentions that while the Japanese were bad, if “half the tales told by some of our men about the way they treated the ‘wogs’ were accurate, British colonial policy between the wars was as bad as the Japs at their worst.”]

Acknowledged or not, the war crimes were real enough. And as the Soviet tank divisions slashed across the plains of Manchuria in August 1945, crushing the Kwantung Army under their tracks, the Japanese army turned on the Chinese in one last orgy of violence. Civilians of all descriptions were swept up, casually murdered, and their corpses dumped in rivers; machine gun squads massacred entire villages before the Soviet forces could reach them; and young Japanese, many of whom had absolutely no desire to participate in this war in any way, were jammed into uniforms, informed that it was their duty to die for the Emperor, and sent off to do their share of killing.

This is the story of three people during those days of August, seven decades ago. 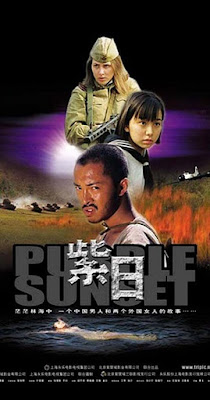 Yang is a Chinese peasant in his late twenties or early thirties. When we first see him, he is among a mass of Chinese civilians, roped to each other and being marched along to be slaughtered by a Japanese machine gun squad in front of a wall. The rest of the civilians are murdered, but before Yang himself can be killed, Soviet forces which have broken through the Japanese lines arrive and annihilate the Japanese. Yang, the only survivor, is put into an armoured personnel carrier along with Soviet wounded and a female medical officer, and packed off to the Soviet headquarters somewhere along the shifting frontline.

As we see later in flashback (the backstory of all the three main characters is revealed in flashback) Yang is in this position because his home was invaded by Japanese troops on one of these murderous missions.  All they found were Yang himself, and his aged mother, whom they tied to posts. The officer in charge ordered one of his young troops (a bespectacled schoolboy scarcely taller than his rifle) to bayonet the old woman, and beat him until, face covered with blood and tears, he complied. 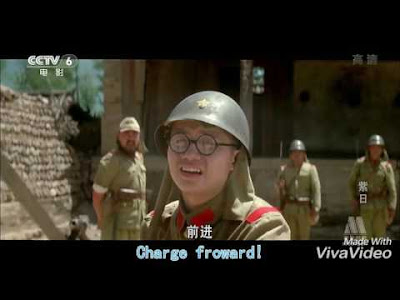 While other Chinese dead were being tossed into a river in sacks – or being burned alive for sport – Yang and other survivors were marched off to be shot. As the only survivor of his village, Yang literally has nothing left.

The armoured personnel carrier has, as I said, a female medical officer. This is Nadia, whose Russian is so clearly enunciated that I could understand almost all of it without needing subtitles. Her flashback reveals that her son was killed in a Nazi air raid when a shot down German plane crashed into the playground he was in. And that is it for her family as well.

As the armoured personnel carrier tries to look for the headquarters among unmarked roads in the North Chinese plains, the driver takes a wrong turn and blunders into a Japanese base. In the ensuing firefight, all the Soviet troops are killed except Nadia and the driver. They and Yang manage to escape into the forest, and decide to try and find their way back to the Soviet lines. In the middle of unknown territory, this is easier said than done.

Walking through the forest, they come to a bridge, on the other side of which is a guardhouse. It’s apparently deserted, but as the driver crosses, someone inside throws a grenade at him. He retaliates by riddling the guardhouse with submachine gun fire, and kicks down the door to find...two Japanese schoolgirls. One of them commits suicide at the sight of him with a bayonet, but he captures the other. And, deciding that she can be their guide out of the forest, they take her with them, gagged and at the end of a rope. Her name is Akiyoko.

Flashback: Lines of young people in the rain, girls on the left, boys on the right, listen as a Japanese officer screams at them about how they are all “soldiers” now, not students, and their only duty is to kill their enemies and die for the Emperor. Akiyoko, whose father has been conscripted and likely dead, and her lover, Onishi, are in different lines, listening. Shortly after, he is taken away along with other recruits while Akiyoko, slipping and sliding in mud, runs after them, crying. But the lorry vanishes in the distance, leaving Akiyoko standing in the mud, and soon afterwards it’s her turn as well.

As the four march through the wilderness, they get into a minefield, and the Soviet driver is killed. Nadia and Yang, suspecting Akiyoko of having deliberately led them into the minefield, nearly kill her, but finally decide to spare her for the moment. At this point they all speak to each other in different languages: Russian, Mandarin, and Japanese, which create further confusion. They save her again, when she falls into a quagmire, and then, when a crashing Japanese aircraft starts a forest fire, she saves them by creating a firebreak – and reveals in the process that she speaks fluent Mandarin. It seems that she’s lived in China since the age of four and does not even know for certain that Japan is across the sea.

In a Western film, the plot would be straightforward from this point. The two older people, Yang and Nadia, would fall in love, and they’d adopt Akiyoko, and the three of them would live happily ever after. This is not a Western film, and the story is much more complicated than that. It is full of tender moments, as suspicion wavers and recedes, but never goes away; and spots of hope - but whose hopes are they? Can a Japanese girl have the same hopes as the Chinese her nation has massacred, and can a Soviet soldier have the same hopes as the two of them? 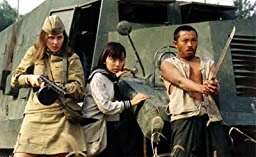 No, it's not a Western film, and so it marches inexorably towards a dramatic and tragic conclusion. What that is I won’t tell you, but the film is right here, so you can watch it for yourself:

I love this film. I think it is superb, and almost as good as the Soviet film Come And See, which I rate the best war movie ever made. I find it incredible that it is not famous. I can only speculate that this is because it’s a Chinese movie about Japanese war crimes, which means that it’s dead on arrival as far as the Western media are concerned.

The acting is excellent from all three main leads, with nuance and expression. Most of the Japanese soldier parts are overacted, but given the film that is excusable. The direction is good, and the scenery is indescribable. There are a few historical inaccuracies – while there was one last Japanese kamikaze attack after the surrender, the planes were flown by volunteers and never hit any target, much less an American aircraft carrier – and Japanese hand grenades of the period did not work in the way depicted in the movie. These are not important quibbles.

I strongly recommend that you watch it.