An Interregnum in Idlib

If you're dependent on Western media for your information, you will almost certainly have been unaware of this, but significant things have been happening in Idlib, which is ruled by cannibal headchopper "rebels".

It is important that you understand what, because very soon, when the Syrian government launches its offensive to recapture Idlib, all this is going to disappear down the memory hole, and we'll keep hearing liberal bleating about "moderate rebels" again.

Just like we did in Aleppo. Remember Aleppo? Where the liberals wanted to start WWIII in support of al Qaeda?

Unlike other parts of Syria, Idlib has never had a large ISIS presence. The remaining groups there have, by a process of massacring each other, devolved into two broad gangs.

The first of these is Hayyat Tahrir al Sham (HTS). We will be talking about who these people really are in a moment. For now, remember that it's is a Wahhabi group ideologically indistinguishable from ISIS. HTS has just succeeded in taking full control of Idlib city and the Turkish border, driving its rival gang into the Idlib countryside, to the considerable dismay of terrorist supporters online, who were cheering HTS only a few days ago and have suddenly discovered that it's a child-soldier-using, extortionist engine of evil. 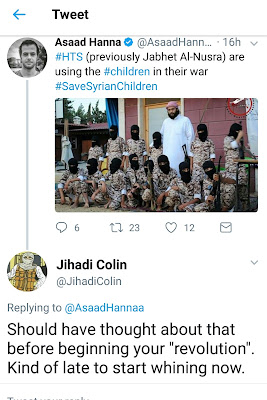 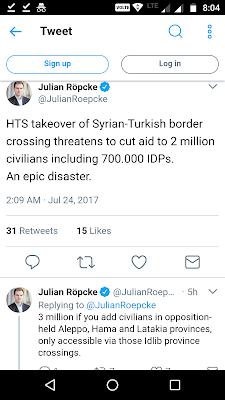 The opposing gang alliance is led by Ahrar al Sham. It is a Salafist group mostly comprising Syrian Jihadis owing allegiance to the banned Muslim Brotherhood. It was formerly an ISIS ally, then switched to becoming an HTS ally, and is now an enemy of both. In fact I can't think of any other terrorist gang in Syria which Ahrar al Sham has not fought at some time or other.

So, are Ahrar al Sham the "good guys"? Only if you choose to ignore inconvenient facts, such as that the gang, Harakat Nour ad Din al Zinki, that beheaded the sick twelve year old Palestinian boy Abdullah Issa in Aleppo, is part of the Ahrar alliance, having defected from HTS. 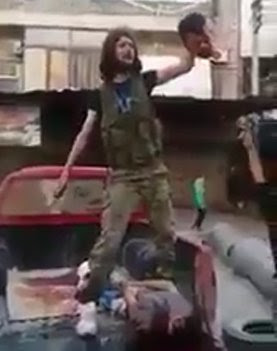 So, as things stand, HTS rules Idlib, and with its control over the Turkish border crossings now has full rights to extort all it wants from all imports, from food to money to weapons, that come across this border.

Sultan Erdogan of Turkey, who is ideologically beholden to the Muslim Brotherhood, will be less than happy with this, but it's unclear just what he can do about it. Why is he unhappy?

Because HTS is Wahhabi, not MB, and there is also an interjihadi struggle going on just as there is one between human beings and jihadis. And unlike ISIS there's no oil for HTS to sell at bargain rates from Idlib to Turkey, while everything that could be looted is already long gone. Erdogan is corrupt to the chromosomes; if there anything he loves it's money.

All this is extremely important, but remember that none of this will be mentioned in your media when Assad retakes Idlib. And overnight everyone will forget who HTS really are.

And who is HTS, really?

That's it.﻿ That is it right there. 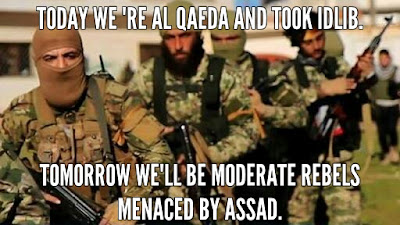