As some of you might have perhaps noticed, I have not updated this blog in the recent past. Here are some of the reasons for this:

First, my six-month-old new laptop’s (the one on which I’m typing this) hard drive crashed, taking with it most of my files. A lot were backed up on my old laptop, on which more anon, and what I wrote in the last few months was also online, but all my downloaded material went.

Since the laptop was under warranty, I could get the hard drive replaced for free, but I had to return it to the shop from which I’d bought it, which in turn had to send the crashed hard drive back to the company for a replacement. When I had done that, I went to turn on my old laptop – only to find it wouldn’t turn on. Something hellacious had gone wrong with it too.

This was hardly a new thing; the reason I’d bought my new laptop last year in the first place was that the old laptop was breaking down so frequently I was spending more on keeping it going than I’d spent originally to buy it.

However, at the time I’d no idea if the files on the old laptop were gone as well, and I had a dreadful couple of days until I’d got it confirmed that, no, it wasn’t a hard drive problem, and my files were safe.

With both my laptops in for repair, I’d only my desktop. However, here, too, I had problems. For one thing, with my worries about the laptops and my files, I had hardly any desire to write. Secondly, the desktop isn’t portable, and my internet at home seemed to be down all the time. Third, I began having episodes of recurrent back pain, which precluded sitting upright for too long. I could do a cartoon or two on my desktop, but I couldn’t post them until the net was up. And half the time I didn’t want to.

When I got the new laptop back, it came with a temporary Windows 10 installed, which was valid for just a month. I had to order software from the company, which when it arrived (less than a week before the end of said month) had to be installed again. And while installing, the computer shop managed to misplace all of my recovered files...and claim they never existed in the first place.

To say I was infuriated would be an understatement.

In the end, I did locate the files. They were in the computer shop’s removable hard drive, sitting there without the shop checking to see if they were there before saying they weren’t. They had to be uploaded and reinstalled, which they were...eventually.

My files are still in a bit of a mess and require organising.

By the time I had my laptops back, I had another problem (to which I’ll allude in a moment). Meanwhile, my desktop suddenly packed it in. It didn’t stop working, but all its USB ports did stop. This meant that I couldn’t even connect my scanner anymore, and my desktop (as I may have mentioned) is where I do all my cartoon work. So it turned out that my desktop wasn’t working either; it turned out to need a new motherboard.

And when I got the desktop back with a new motherboard, my modem fried. No modem.

Let’s get this in sequence:

As of this writing the first three have been (mostly; the sound system on my desktop still doesn’t work) fixed, but I still have no modem at home, and I absolutely do not trust any electronic devices to work at all anymore.

Why do I not buy a modem, or for that matter, a tablet to do cartooning, and an external hard drive? Well, that brings me to Reason Two:

In terms of money, the last two years have been a nightmare. The worst point was Modi’s Great Big Demonetisation Jamboree in November, which crashed my finances through the floor, and it took over six months before my earnings recovered to the October level. Of course, my insurance premiums, rent, salaries payable and taxes weren’t reduced, though my income was.

I have been hurting, badly.

On top of that, I am going to have to shift my clinic to another place in August, since the owner of this commercial building wants to use these rooms for something else. After much dickering, he withdrew the eviction order he’d served on all the tenants, and has offered me alternative space in this same building. It’s actually bigger than what I have now, but any shift requires a lot of money. On top of which specimens will take time to relearn where I am going to be. They literally can’t see the signboards before their own eyes.

Simply put, I have no money to spare on inessentials. None at all.

There was a death in the family. This was an uncle of mine, who was a doctor, and who died of a heart attack. I don’t want to say anything more about this, except to say that his death unleashed a disgusting tidal wave of politics and backbiting in the extended family, in which I most emphatically did not join.

I will, however, say something about the fourth reason I have been away. Specifically, I have been having great problems motivating myself to write. At some points the very idea of writing has filled me with revulsion. It has seemed to me that I’ve been pouring out myself to the point where I have nothing to give anymore, and quite frankly I was feeling desolate and unappreciated. That was compounded by the fact that I never get any kind of material reward from my writing, and there’s a limit to how much the approbation of casual readers can carry me. I’d reached that limit.

Obviously, the worst of the meltdown – if meltdown it can be termed – has passed, and I am picking up the pieces. I will be writing again, and posting while I can. However, electronic breakdowns are not under my control, and if I can’t afford to fix them right away, then that’s too bad.

For me, and perhaps, I might dare flatter myself, for a few of you as well. 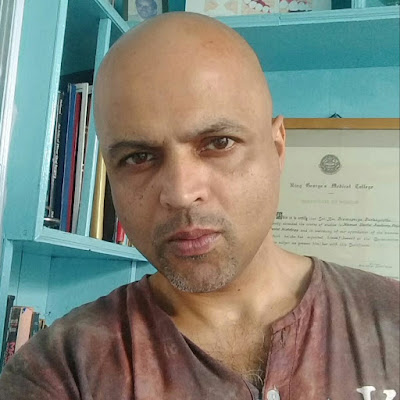