A couple of thoughts on ISIS videos

You know, by now I should be used to it, but even after binge-watching ISIS videos for a couple of years now, I still can’t get over some things. To wit:

1. The extreme production values. You watch battlefield videos from literally any other source – any at all, including the Syrian Army, Hizbollah, the moderate cannibals, the US Army even – and they’re raw, blurry, jerky, often out of focus. ISIS? You’d think it was all done meticulously in a studio with the help of highly competent special effects specialists. Not just a little – all of it. When you watch an ISIS drone filming an ISIS suicide bomber car dodging rockets along a highway as he drives towards a helpfully marked target, you get the exact same ultra-high-definition video as you get when they show multiple-camera angles of blood spurting from a prisoner’s decapitated corpse. You’d think, with all the combat they’ve been in, the production values would slip sometimes, but no such luck. And it all comes complete with weaponised music soundtracks that get into your head and won’t let you go.

I mean that. ISIS music is a secret weapon. You don't even have to understand it to have it echoing inside your head, nonstop, day after day after day.

Nor does it seem to matter just where the videos originate. I’ve watched ISIS videos from the following places: Syria, Iraq, Libya, Nigeria, Afghanistan and Indonesia. And you know what? They all have the same ultra-high production values. A Boko Haram video from Nigeria might have black men in it lecturing the camera, while one from Afghanistan might have horseback-riding ISIS men in the misty mountains (really; I am not making this up), but they’re made to the exact same standards as one from a Mosul battlefield.

You’d think all those videos went to the same studio to be processed by the same people.

It’s not just the production values. Websites which post ISIS videos, like Heavy, typically also post photo teasers a few days in advance. Sometimes one video has a trailer of the next video tagged on at the end. Yes, I said trailers. As in movies. Which means that one video is planned and ready before the previous one is released, and they’re building anticipation. Creating a market.

Someone tell Hollywood that they’ve been out-Hollywooded, and that there’s going to be a Jihadi Oscar next year or the year after. I wouldn’t be at all surprised.

(You’ll note that I’m carefully avoiding saying that they know all about it already.)

2. Then, if there’s one thing you learn from watching ISIS videos – and reading its literature – it’s the extreme hatred it has for other Muslim groups, be they Shia like Hizbollah, or even fellow Sunni militant groups like the Taliban (yes, ISIS absolutely hates the Taliban). This makes it especially ludicrous to listen to Western Islamophobes treat Muslims as though they were a unified and indivisible block out to conquer the planet. They can’t even stand each other for ten seconds – who the hell are they going to conquer?

But of course it makes for great drama, doesn’t it? Lovely theatre? Reinforces all the prejudices you care to name, and sets up a “clash of civilisations” where none was before?

3. I still can’t comprehend just whom these videos are supposed to influence to join ISIS. I’ve grown jaded enough to be able to tolerate the sight of people getting executed by anti-aircraft guns (beheading is now passé for ISIS) or crushed by a tank, but that still doesn’t show me anything more than the obvious fact that these people are insane psychopaths. Let’s assume I show you a film of myself and a few friends chopping off heads and blowing up churches and mosques. Then I tell you, “Hey, come on, join us. It’s fun!”

Assuming you’re a remotely normal individual, what’s going to be your answer?

A direct correlation to slasher films is tempting to make, but doesn’t work. Yes, slasher film villains gain a cult following, especially among immature young males. I myself used to rather like Leatherface and Hannibal Lecter. But when bloody Jason Voorhees is chasing you with his ice hockey mask and machete, he’s still only a movie monster. He isn’t going to chop your head off.

ISIS is most assuredly going to chop your head off.

So, who, exactly, are these movies meant to influence? Since from all indicators ISIS doesn’t actually depend on the videos for recruitment (Twitter, its online magazines, and word of mouth seem to be its primary outreach programmes), what does it mean to do with them? Scare potential opponents? That’s not a viable answer because, y’know, potential opponents can be prevented from getting scared by just...being stopped from watching the videos. And watching people’s heads being cut off gets old very fast. It’s not possible to keep being afraid.

The only answer I can come up with is that the videos are meant for two things:

First, branding. ISIS is marking its territory in the information warfare age. It’s putting its story out first, and in the most effective way. When you watch an ISIS man literally climb on an Iraqi tank to drop a grenade through the hatch in the middle of battle, you find it harder to believe that someone like that can be defeated. Killed, yes, defeated, no. It’s readying the fight for the long haul.

Secondly, and, probably, more important, is the deliberately cartoonish villainousness of ISIS. I can’t state enough how cartoonish this is. If you have ever read any badly drawn 1970s comic with an Evil Mastermind, or one of the worse Bond film villains, you’ll recognise ISIS at once. You’d almost think they were deliberately trying to make themselves as stereotypically evil as possible, and as crudely violent...even though their violence is from all indicators no worse than that of the al Qaeda franchise Jabhat al Nusra or the “moderate” child-beheading rebels of Harakat Nour ad Din al Zenki. Those other gangs do things like impale Christians on crucifixes in churches, play football with decapitated heads, shoot women on camera, and behead sick 12 year old kids on video...things even ISIS doesn’t depict itself doing. But everyone stays fixated on ISIS.

Perhaps...just maybe...that’s the whole point? To make the other gangs look good by comparison?

Maybe I’m being paranoid, but I wouldn’t be all surprised. 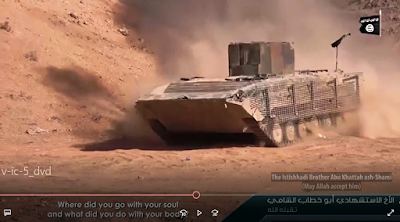 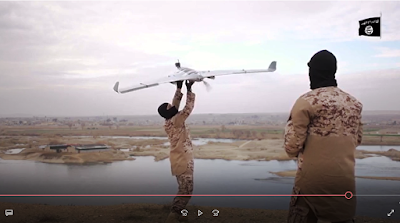