She found the god just as the long evening shadows blanketed out the day.

Behind her, the ocean beat on the rocky beach, and in front the cliffs soared skyward, their tops lost in the blackness. And in between, there was the god, crouching.

The god was sitting over a small pile of pebbles, picking one up, examining it, putting it down and picking up another. He kept doing it as she approached, never looking up, never picking up the same pebble twice, never putting it down in the exact same place as he’d picked it up.

She stood watching him for a while. The god looked like a boy of maybe six, with hair that was so long that it fell over his face; but of course he was a god, whatever he looked like.

She opened her mouth and closed it again. Of course, since he was a god, he’d know what she was thinking.

The god examined a pebble, shook his head, and flicked it away. It bounced on the beach near her foot and rattled off into the darkness.

“You have been looking for me a long time,” the god said.

“I have,” she acknowledged. “And you knew I was coming.”

The god looked up at her at last. His eyes roved over her, indifferently, from the greying hair on her head to the scuffed sandals on her feet. “Yes,” he said. “I knew.”

“You could have gone away,” she said, “if you hadn’t wanted to meet me. But you chose to let me find you here.”

He examined another pebble and put it down. “Why should I go? This is my place, after all. I created it. It’s you who are intruding, and why should I flee from you?”

“Indeed,” she acknowledged. “Why should you flee from me, unless you have a reason to fear me?”

He did not bother to respond. Waves crashed on the beach and the night turned thick and dense, and yet he kept arranging his pebbles.

“And you know why I have been seeking you?” she asked at last.

He tilted his head and studied her. “Does it matter?”

“Does it matter?” she repeated. “I’ve been looking for you all through the shadowed halls of dream. I’ve hunted for you along the cloud-slopes of the hills of myth. I’ve crawled naked through the slime of caverns below the mere imagining, where things with teeth scraped away my skin. And you ask if it matters?”

“Give him back to you?” The god picked up another pebble and rolled it between his fingers. “I’m not sure I understand.”

“You know what I mean. He was all I had, and you took him from me.”

“I didn’t take him from you. It was a traffic accident.”

She laughed, bitterly. Her laugh sounded like brittle twigs cracking. Behind her the surf roared on the stones. “And how would it have happened unless you willed it?”

“I don’t will things,” he said, rolling the pebble between his thumb and finger. “Things are as they must be.”

“He was good,” she said. “I’d searched forever and a day until I found him, and I pledged to love him, too, forever and a day. And then it was just like that – a car which jumped a traffic light. He wasn’t even in it.” She laughed again. “Forever and a day, over in a second.”

“There’s no such thing as forever.” He flicked the stone away.

Quick as a striking snake, her hand flashed out and grabbed the pebble. “No,” she said. “No more of that.”

He sat back on his heels and stared at her. “Do you even realise what you’re doing?”

“Yes,” she said. “Yes, I do.” She held up the pebble. “Whose life was this? Whose dreams and happiness were you throwing away on a whim?” She tossed it back on to the pile, one among thousands of others. “Not this time.”

“No?” She crossed her arms under her breasts. “But you give yourself the right to play with lives, and amuse yourself with them?”

“I am a god,” he said. It sounded as though he was reminding himself as well as her. “I am a god.”

She looked at him then, really looked at him, and the look that she gave him sent him stumbling several paces back. “Were a god,” she said. “You’ve played with your stones long enough, little boy.”

“No,” he said. He fell to his knees, scrabbling through the pebbles, looking for hers, hunting. “No.”

“Yes. You were a god. You have to earn the right to stay a god. You’ve lost that right. It’s time to grow up now, little boy. It’s time to go home.” She held up a finger. “Haven’t you got it yet? There’s no point in looking for the pebbles any more. They’re just...pebbles...now.”

A void opened in the darkness. It began as a tiny spot of pure black, so intensely black that it seemed to suck out the light from the stars overhead. It grew, faster and then yet faster, turning as it expanded, whirling round and round, an open mouth reaching for the god, sucking him in, his fingers sliding, slipping in the spinning dark, his own mouth open and silently screaming as it swallowed him down.

And then he was gone.

Then she kicked over the pile of stones, scattering them, and turned and walked down the beach towards the pounding, sucking, waiting sea. 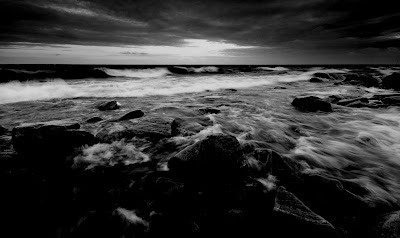