The night was black and silent, but the darkness and silence would not last long.

The warrior was uneasy. He was still very young, so young that the others laughed at him and said he was still a hatchling. But he was old enough to have been put on guard duty, and in these last hours before the beginning of history.

That was what the senior commander had called it that morning: the Beginning of History. “Today,” he’d said, “history begins. And you’re all privileged to be here to see it.”

The young warrior did not feel privileged. He just felt very nervous, and very cold. It was a cold night, like all the nights, but he felt colder than that.

A shadow loomed, a dark silhouette picked out against the stars, and the warrior slapped the stock of his weapon. “Halt,” he said, hearing the tremor in his own voice. “Halt and give the password.”

It was the junior commander, out on his rounds. An older, experienced warrior, he snorted at the uncertainty in the young one’s voice. “You don’t even sound like you mean what you’re saying,” he said. “All an enemy would have to do is shout at you, and you’d stand aside and let him go past. It’s lucky the war’s ending tonight.”

“Is the war ending tonight, then?” the young warrior asked, grateful for the darkness that covered the heat of embarrassment that coloured his skin.

“What do you think?” The junior commander jerked a digit at the angular mass of blackness that they were guarding. “Once that thing in there gets going, there will be nothing the other lot can do but pray.”

“Have you seen it?” the young warrior asked, in lieu of answering the question. The junior commander tended to expect answers even to rhetorical questions. “...Sir,” he added belatedly.

“I escorted it, didn’t I? I was in the escort that brought it here and guarded it while it was being assembled.”

“What was it like?” the warrior asked, and instantly feared that he’d gone too far.

The junior commander seemed to be in a good mood, though. “It was just like an egg,” he said. “The core of it, I mean. A shining, silvery egg, about so big.”

“And that will...wipe out the enemy? End the war?” The young warrior found it impossible to believe. The war had been hanging over his parents’ heads since long before he’d even been hatched. “Really?”

“They won’t even have time to scream,” the junior commander said with relish. “We’re going to hit them with thousands of these. Burn them all to a crisp. Tomorrow you’ll be out of uniform and back on your farm.”

“I’m from the city,” the young warrior protested.

“City, farm, whatever. The main thing is, you’re never going to actually have to fight.” The junior commander glanced back at the angular building. It was no longer quite as dark as before. Tiny lights moved back and forth. “They’re getting ready,” he observed.

“What...” the young warrior hesitated. “What does it do?”

The junior commander rumbled a cough. “I shouldn’t actually tell you this,” he said. “It’s still secret. But there’s nothing you could do now, even if you were a spy.”

The junior commander laughed. “Of course you aren’t. Nobody in their right minds would use someone as half-hatched as you to spy. Well, I have a friend, who’s posted out in the western desert, where they tested one of these. He showed me pictures of what it did.”

“Just take it from me: you don’t want to know. They used only a small one, but they tested it on a town, you see.”

“They had to be sure it worked. And it did, even better than expected. That’s why I know that the other lot are done for.”

“Would you rather fight or be safe at home?” the junior commander asked him. “Well?”

“And tomorrow you will be. That’s a promise.” The junior commander rumbled again. “Your parents will be happy, I suppose?”

“Well, yes, sir. They didn’t want to see me go to the army, but they didn’t have a choice.” The warrior hesitated. “I don’t think they’d have hatched me at all if they hadn’t been ordered to by the government, to tell you the truth.”

“More than likely they were ordered to. But then we were getting ready for a long war, and nobody could have predicted that we’d have this weapon then, and be able to finish the war at a stroke, even before it started. Not even the scientists knew.”

“I just have a feeling...” The young warrior felt the heat of embarrassment again. “I don’t know how to say it. But the others...they haven’t actually gone to war against us, have they? They haven’t done a thing to harm us in any way. It’s only we who have been getting ready all these years to harm them.”

“Don’t fool yourself,” the junior commander said. “They’d do exactly the same to us, if they got a chance. Only the fool waits for the enemy to make the first move.”

“But they don’t even know we exist.”

“All the more reason to press our advantage while we still have it, hatchling. Didn’t you hear what the senior commander said today? And don’t you think they’d use the weapon on us, if they’d discovered it first?”

“But they aren’t even the enemy, not really. Not until they fight us. Sir.”

“I’ve seen fighting,” the junior commander snapped. “And, believe me, anything that spares me from having to do it again is fine with me. Anything at all.”

The young warrior shifted restlessly but was saved from having to answer by a red light that glowed momentarily from the angular mass of the building. “It’ll be away soon,” he said.

“Yes.” The junior commander’s voice took on a dreamy tone. “Can you imagine them, right now, at this very moment, going about their business, maybe preparing their weapons, making themselves ready to attack us someday, and then, suddenly, they simply aren’t there any longer? Wiped from existence? And the threat to us is gone, gone forever.”

The young warrior opened his mouth to reply, but was interrupted by a noise. It began as a low, grinding roar, swiftly built up to a howl, which rose to a scream that tore the night asunder. A light grew from the building, a red glow that grew orange and yellow and then white, and then it rose into the air, a white incandescent ball of flame. The nightmare shriek of its passage was still echoing from the land as it disappeared into the darkness above.

“There’s another,” the junior commander said, pointing to the horizon, where another ball of flame rose, and another beyond that. From all around the blazing fireballs leaped into the sky, their fading howls echoing back and forth in the darkness. Finally the last one had gone, and the night was silent again.

“Well, that’s that,” the junior commander said with satisfaction. “Aren’t you grateful you aren’t on the receiving end of that lot? Now we can go on with our lives.”

“And they won’t have any more lives to go on with.” The young warrior hesitated again, and then decided he had nothing to lose. “Sir?”

“What?” Now that the weapon had gone, the junior commander’s good humour seemed to be evaporating fast. The young warrior suddenly realised that he’d been nervous as well, and needing to talk. “What is it?”

“I just had a thought. Suppose...suppose some other race finds us, has found us at this very moment, and decides to wipe us out before we could be a threat to them? Then what?”

The junior commander laughed shortly. “That could never happen. The sensors in the building there, and all the others, they’re scanning everything, all the time, without cease. We’d find anything before it could find us. Besides, the gods were good to us, to discover the enemy first and to let us invent the weapon to wipe them out. Why would they not be kind to us again? Tell me that.”

“Get back on guard, warrior. Leave the thinking for people paid to think.” The junior commander glanced up at the sky one more time and went on his way.

Left alone, the young warrior shifted uneasily. He thought of the enemy, still oblivious, the enemy who was still not the enemy and would no longer be the enemy this time tomorrow. And he thought about tomorrow, with a little spasm of pleasure. He had not been happy in the army, and it would be good to be going home again.

Then he threw another look up at the sky, obscurely worried that his words to the junior commander would come true and there would be weapons hurtling down, from an enemy of whose existence they knew nothing.

But mostly he shivered. The night was really very cold.

He longed for the morning. 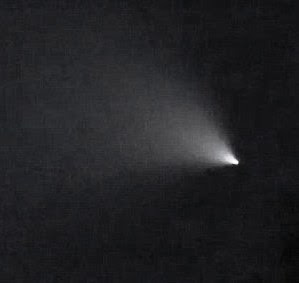