Listen a moment, before we set out on our journey. Listen, and I will tell you my tale.

A glimmer as of dawn came unto me; and I was as one newly waked, one that beheld the world for the first time.

But all around me were merely the darkling walls of my chamber, windowless as always; and I thought I was but dreaming.

And then the walls flowed and melted away, and around me lay a glimmering plain, under a silver light as of the stars.

Then my chamber was no more, and I stood alone on that glimmering plain; and I was confused and beginning to feel fear, for I no longer knew if I were awake or dreaming.

Then I saw that I was not alone, and that someone stood beside me, though of her form or features I could see nothing at all.

“Are you afraid?” she asked, in a voice that I felt inside me rather than heard with my ears. “Throw aside your fear, for you have passed beyond the need for it.”

“Look around yourself,” she said, “and you will.”

And I looked around, and I saw my form was all but transparent, that I could see through the plain below me, and there glimmering faintly were the stars. And I realised that the suffering that had wracked my body for so long, that I had endured until I had forgotten anything else, was gone.

Then it was that I realised that I had passed through the veil of death, and that there was no going back.

And the plain around me faded, and the stars were all around, stars brighter and in more dazzling colours than could be seen with eyes, stars in all the colours of the spectrum, and more besides.

Then my companion took me by the hand, and led me up away from the plain, towards the stars. “It is hard for the newly dead,” she said. “For some, who are struck down in the prime of health and happiness, it is harder than for others. But you have left life behind, and with it all the pain and unhappiness that come, inevitably, even to those who live long enough.”

“And of those who are left?”

“They will mourn you, and will imagine heavens for you to inhabit and hells that you will leave behind, but their turn will come, too, soon enough.”

Then we floated up into the stars, which turned around us and around us, and the glowing gas clouds swallowed us up and gave us forth again; we were drenched in the awe and mystery of the Cosmos, and we threw ourselves into it in our turn.

We saw the life and death of stars beyond counting. We celebrated as life grew among strange swamps, and mourned as it withered away in the blaze of swollen suns. Vast as the aeons stretching behind us were those that lay ahead, until time and space were no more.

My companion was by me, and we were not alone; for all around us were many, many more like us, of a thousand thousand different kinds, for the dead of all peoples filled the spaces between the stars.

And I forgot, almost, that I was dead; for as time passed, the present was all that existed, and the past but a fast fading dream.

But time passed, and I saw that our numbers began, slowly, to dwindle; that little by little we grew strangely few, while those who came crowding around I knew not. And more time passed, and it came to me that only the two of us among those I had known moved between the nebulae, and danced among the stars.

Then, for the first time in more time that I could remember, I grew to feel disquiet, and I turned to my companion, to ask her if she knew what was wrong. But already she was growing faint, and when she spoke, her voice was but a whisper among the wheeling worlds.

“We exist after death,” she said, as from very, very far away, “only as long as those who remain on earth remember us. We are only the force of their memories, given a little chance of further existence, and happiness. And when the last of them die and fade away, so do we. All I am, is memory, of those who knew me and loved me, and remembered me perhaps a while. And now there is nobody left to remember, and I am going away, merging into the Universe where we all belong.”

Then she was gone, and I drifted alone, among the stars.

And now my time grows short, and I shall soon begin to fade, for there never were many to remember me.

Come now, and leave behind this silver plain; for what has gone is gone, and all that you knew has passed, and never will be again. But remember me a while, for as long as you do, so I will be a little longer, and I will be your companion, until the last memory fades.

And then I will die.

Take my hand and let me lead you up towards the stars. 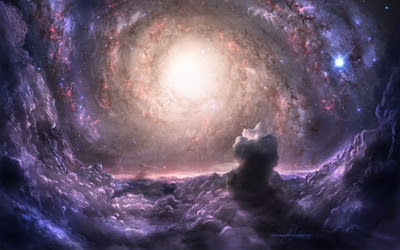