If the current government of India wants to invite ISIS to set up an affiliate in the country, it’s emphatically going about it the right way.

I haven’t been talking about the effects of the Hindunazis on the country in the one year that they’ve been in power, but rest assured that they haven’t been idle.

The Hindufication project in India grows apace. Although it’s not yet possible for the Hindunazis to declare this the official Hindu nation of their dreams, they are working hard at the state level, where the laws permit, to make Hindu “values” the law as far as possible. Thus, for example, even the possession, let alone consumption, of beef is now a crime punished by stiff prison sentences in several states, all ruled by Hindunazi governments. Hindunazi politicians have openly called for Muslims to be disenfranchised, and referred to Christians and Muslims as “bastards” while Hindus are “sons of Rama”. In the state of Rajasthan, Muslim kings like the (extremely liberal) Mughal emperor Akbar have been erased from school history books (along with other “foreigners” like Pythagoras and Newton) in favour of Hindu “heroes”.

Hindu “science”, which last raised its ugly head under the previous – and far more moderate – Hindunazi government in the early 2000s, is back with a vengeance. Even back then, ultra-right rags like the magazine India Today (whose editor was rewarded with a civilian medal) relentlessly plugged the Hindunazi agenda and distinguished between “indigenous religions” and Islam and Christianity. Today, the Prime Minister of the nation can claim at a scientific conference that ancient Hindus knew about plastic surgery and in vitro fertilisation, and not one of the assembled scientists can summon up the gumption to contradict him. And even as I write this, I came across a report that cow urine is now going to be used as a hospital disinfectant in the Hindunazi state of Rajasthan.

And with every day that passes, minorities in India grow more and more insecure.

Normally, this would not – from the Hindunazi point of view – be of much importance. Christians make up something like 2% of the population and are virtually powerless. Muslims are far less defenceless, but they’ve been systematically marginalised and disempowered, pushed into ghettoes, and indigenous Islamic terrorist groups like the Indian Mujahideen and Student’s Islamic Movement of India are remarkably ineffectual. But there’s a new force in the world, one that’s actually catching the eye of a lot of people, and that force is ISIS.

This isn’t the place to discuss whether ISIS is an independent formation or is partly or wholly controlled by the west as a de facto ally and tool, or a combination thereof. Whichever it is, the fact is that for a lot of young Muslim people, the Islamic State is a glamorous, vibrant entity, which has the power and courage to face off against multiple countries and fight them to a standstill, while expanding elsewhere at a blistering rate.

And that the Islamic State has made recruits among Indians – something al Qaeda, with its Arab-centric philosophy, signally failed to do – can’t be denied. The exact number of Indians who have gone to Syria or Iraq to join the takfiri headhunters isn’t that large – the figures vary according to whom you ask, from a couple of dozen to up to three hundred – but they did go. And far more than those who did go must be those who stayed back, but still bought into the jihadist philosophy. There was also a guy in Bangalore who was arrested for running ISIS’ twitter campaign in this country. I suppose he’s been replaced by now.

Here are some of them far in the south of the country: 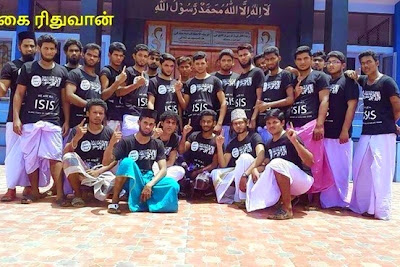 And some more, in Kashmir in the north: 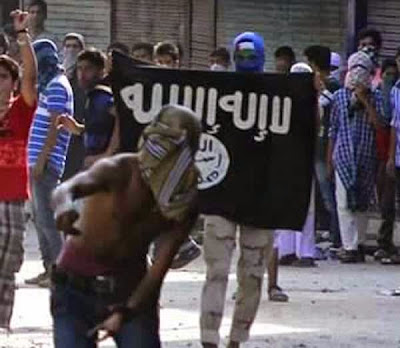 And after all, why wouldn’t they? If you feel hemmed in by the day, targeted by creeping religious fascism, and someone tells you that the country you live in is a Dar ul Harb, where Muslims are persecuted, wouldn’t you agree that they have a point? And if they then say that ISIS is the answer, that it can defend you, wouldn’t you at least think about it?

I’m betting you would.

Even some Hindunazis, like the anti-Christian polemicist Arun Shourie (Harvesting Our Souls) have noted that all it would take would be a hundred or so disaffected Muslims to get together and decide that ISIS has a point for the organisation to get a toe hold in this country. And with bomb-making instructions available online, even if they couldn’t find automatic rifles, or those spiffy balaclavas and Toyotas, they can do one hell of a lot of damage, both directly and indirectly.

Indirectly? Why, yes, because Hindunazi stormtroopers like the Bajrang Dal are eager and willing to find excuses to launch anti-Muslim pogroms, and an ISIS module in the country would be the perfect excuse to launch said pogroms.

And that brings me back to the starting point. I can’t believe that the government is so stupid that it can’t put together the elementary reasoning ability to conclude the same thing that I did. In fact, the only rational conclusion is that the government wants an ISIS module to start work so that it can use that to distract attention from its failures and advance its agenda.

The past year, you see, hasn’t done anything to enhance the reputation of the Hindunazis or to endear them to new voters. The economy, which was supposed to be in a Golden Age, is faltering. The Great Indian Muddle Class hasn’t suddenly become hyper-rich overnight. Prices are still rising, the crime rate isn’t falling, and there’s only so much you can blame on leftists, Maoists, environmentalists, secularists, and Pakistani spies and sabotage.

Prime Minister Narendrabhai Modi’s big gamble was to amend the law to make it easy for his corporate backers and allies to acquire private land for their projects. This ran into a brick wall in Parliament, where the moribund Opposition was suddenly given a golden opportunity to get its act together. Even the Congress party, which had been in apparently irreversible terminal decline, was resurrected virtually from the dead. Things are stalled all down the line.

At this juncture an ISIS threat would be a positive godsend. Like all fascist groups, the Hindunazis need an enemy, and ISIS is a quite genuinely nasty enemy. The Hindunazis would immediately project themselves as the defenders of the nation, and, obviously, all dissenters could be called the enemies of freedom and allies of the Muslim invaders from abroad.

This isn’t, of course, a sustainable long term strategy, but when did politicians, Hindunazi or otherwise, look at the long term anyway?

I’m waiting for the first suicide bomb blasts, and the immediate taking of credit by the Islamic State.

It shouldn’t be long now. 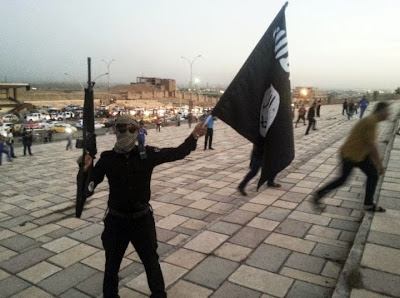