In a top secret meeting somewhere in the Western hemisphere, representatives of hundreds of terrorist groups worldwide demanded that today be declared International Terrorist Day.

In an email statement to the media afterwards, the chairman of the Association of Totalitarian Terrorists and Associated Commercial Killers (ATTACK), Raghead E. Villdoer, said that it was a disgrace that when just about every other group had a day dedicated to them, terrorists should be left out in the cold.

“Terrorists”, Commandant Villdoer, who usually goes by the name Raghead, said, “are a vital component of the world’s economy today. Can you imagine where, for instance, the US Empire would be had it not had the excuse of fighting terror? On what basis could it possibly continue to enslave and occupy nations all over earth, while snooping on all aspects of its own citizens’ lives at home? And where would the military-industrial complex be, without the demand for weapons to send to terrorist groups across West Asia – and then to fight them? What about all the jobs that are dependent on this?

“What about India, where the excuse of “fighting Maoist terror” has led to the government sending troops into the forests to smash tribal villages and crack down on environmentalists? Where would the Indian economy be if the minerals under those forests remained there, instead of being stripped out to enrich multinational mining concerns?

“What about the brave democratic state of Israel? Where would it go with its God-given right to steal all of Palestine, had it not the excuse of fighting terror to contend with? How could it have coped with its internal stresses and rampant fascism?

"Please don't forget the TV studios and movie directors, who, as well, would be left at a loss without the bogey of terrorism to fuel their efforts. What would Clint Eastwood make movies on if he had no psychopathic murderers, er, war heroes, to fictionalise? And without the excuse of terrorism, where would the wars for those people to become war heroes come from?

"We give  our lives, literally, to the job. We put in a hundred per cent effort, live, eat and breathe terrorism. Who else can say the same about their jobs? And in return we get what? Insults and calumny. Is this fair?

“We are the greatest humanitarians the planet has ever known,” Raghead said. “For a tiny, almost infinitesimal effort, we have created conditions which benefit millions, and allow governments and the corporations and the oligarchs who fund them to prosper. In a world where even dentists have a day of their own, for crying out loud, we demand that the world recognise our efforts by granting us 1st April as World Terrorist Day.

"If our legitimate demands are not met," Raghead concluded, "we will immediately stop all terrorist activity and go on indefinite strike. Let's see what that does to your economies. Muhahahahahahahaha.”

In view of this, lapel pins and flags bearing terrorist images will be sold wherever greetings cards are available, or may be downloaded from the internet. 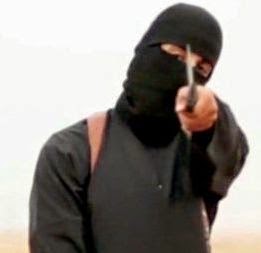 SUPPORT YOUR FIENDLY LOCAL TERRORIST TODAY!
Posted by Bill the Butcher at 8:34:00 am