In a few hours from now, as I write this, Nobel Peace Prizident and Emperor of Exceptionalistan Barack Obama is landing in India on an official visit.

This is not the first time that NPP&EE Obama has bestowed on us the honour of his presence, incidentally*. The last time was in November 2010, when, apart from glorifying Delhi with his presence, he did Mumbai (Bombay) the honour of spending some time there. On that occasion – I swear I’m not making this up – the stately coconut trees lining Marine Drive, where Obama was to visit a college, were stripped of their fruit in case one fell on his holy head. And then in said college visit he had a “discussion” with college students who asked him “hard” questions.

[*I mean that only semi-sarcastically. American media in the late nineties used to talk about how Bill Clinton shouldn't "reward" India with a presidential visit. Some reward.]

Actually, those college students were carefully selected according to two criteria – their parents’ political loyalty, and their own lack of self-assertiveness and opinion. In other words, anyone who was remotely likely to ask the Holy American Emperor any potentially embarrassing questions (like, for example, “How many kids did you drone today?”) was rigidly excluded.

That was, of course, under an Indian government so slavishly pro-US that it had made the one before that – the Hindunazi regime of Atal Behari Vajpayee, which had ruled from 1998 to 2004 – look positively nationalistic in comparison. That was the regime whose rubber-stamp, unelected, “prime minister” had hugged George W Bush and assured him that the people of India – who had no say in the matter – “loved” him. But this time the equations are a little different, since the current Indian government, though utterly vile in most ways, seems less enamoured of the Empire than either of its predecessors.

In fact, I doubt very much that there will be much achieved during the visit, if by “achievement” we mean “dragging India into the Empire’s orbit”. What the Nobel Peace Prizident couldn’t achieve in 2010, I doubt he’ll manage now, when India is committed much more strongly to the BRICS and the Shanghai economic grouping. But there will be a lot of nauseating talk of how the “world’s two largest democracies” (a laugh if there ever was one, either of these two countries calling itself a democracy) share ties and are committed to a future together.

The one section that was, and still largely is, helplessly in love with the Empire is the Great Indian Muddle Class, the same people who rushed to visit McDonalds’ restaurants and Starbucks coffee franchises when they opened. The love affair this lot had with the United States has nothing to do with principles – the Great Indian Muddle Class has no principles – but everything to do with its belief that the US is the kind of society you’ll find in Archie Comics. Disillusionment has begun to set in, but is coming slow.

I don’t know if any Indian left-wing groups are going to demonstrate against the visit by this war criminal, whom Noam Chomsky called much worse than his ignoble predecessor. I don’t know if any media but the left-wing Hindu group are going to mention his  arming and funding of cannibal headhunters in Syria, his acting as al Qaeda’s air force in Libya, his open backing to Nazis in Ukraine, and his hypocritical persecution of Edward Snowden, Julian Assange, Chelsea Manning and other whistleblowers. There’s a tradition in India that one doesn’t speak ill of a guest, even if said guest is a mass murderer who drone-bombs schools and weddings.

But I’m no believer in tradition, and I don’t think of Barack Hussein Obama as a guest. So here’s my comment on his visit: 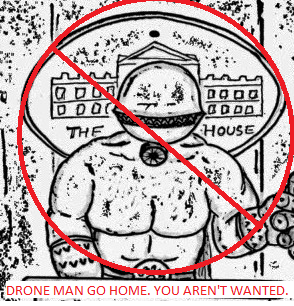