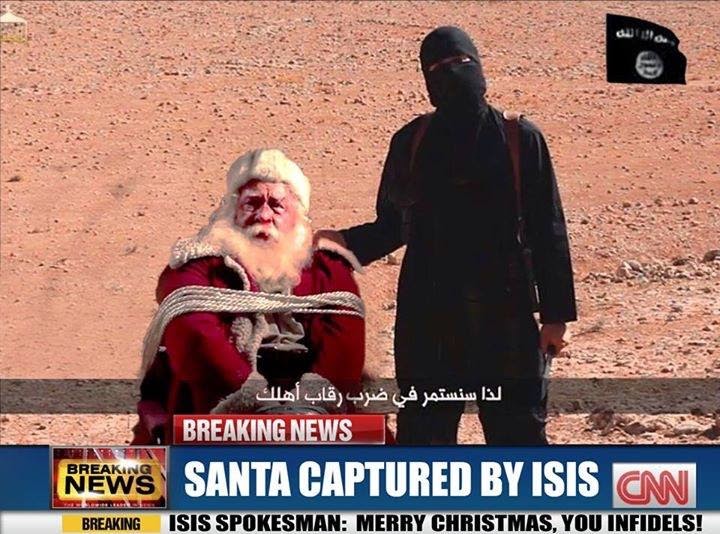 In a terrifying video address to the world, the terrorist group called the Islamic State, known generally by the acronym ISIS, claimed to have captured Santa Claus and threatened to execute him by beheading.

The recently released video displayed Santa Claus, tied up and made to kneel in front of a black clad and masked man who appeared similar to the “Jihad John” who had appeared in previous videos with ISIS hostages.

“Ay up, you kaffir infidels,” he said, speaking with a strong British accent. “We’ve captured your Santa Claus, and without him you aren’t going to have any Christmas, ya tossers.”

Santa, the ISIS spokesman said, had been caught while attempting to sneak into Caliph Abu Bakr al Baghdadi’s tent. “The fat wanker fell on the tent and caused it to straight up fall in on the Caliph’s head, Allah save him,” he said. “When we caught the bellend ‘e said ‘e was delivering toys to the Caliph’s kids. Toys, I ask you. Likely story, innit?”

It is believed that Santa, in a misguided attempt to bring peace to the world, overestimated the tent’s ability to bear his weight – as well as the fact that tents do not usually have chimneys. “I repeatedly asked him to go on a diet,” a sobbing Mrs Santa said from the North Pole, “but he said he had to keep up his image to cater to market demands.”

The ISIS spokesman, however, claimed that Santa had attempted to murder al Baghdadi or perhaps plant espionage devices in the toys. “We found a huge sack of toys the plonker was carrying along wiv ‘im,” he said. “We put them out in the desert and ‘arf an hour later a drone came along and blew ‘em all up sky fuckin’ high. You tell me why they’d do it if the toys weren’t all fixed, eh?”

The revelation that the toys had been bombed caused seismic tremors among the Christmas shopping industry. “It’s a horror, a crime,” a major retail outlet manager sobbed. “ISIS shall pay for this!”

Several Western nations said they would put together children’s armies to fight ISIS. “If these criminals hate children to the extent of taking their toys from them, they have to be annihilated,” an anonymous Internet blogger said. “And children, being directly affected, have not just the right but the duty to fight against them.”

It's thought that the children, given their video gaming skills, will be utilised as drone pilots. A marketing company has already been given the contract to advertise for recruits.

“It’s all part of the Muslamic War on Christmas,” another online commentator said. “With a Kenyan in the White House, we should have known something like this would happen.”

Meanwhile, reacting to the news of the video, President Barack Obama issued a strongly worded statement. “The threatened execution of this iconic figure, whom we all hold dear to our hearts,” he said, “is an intolerable affront to freedom and democracy. I will immediately impose another 12345 sanctions on Russia until Putin recognises reality and leaves office!”

Asked by a reporter what Russian president Putin had to do with the crisis, President Obama responded by saying it was all Putin’s fault. “If Putin hadn’t insisted on backing Assad, Syria would’ve been capture...I mean, liberated, by now, and ISIS wouldn’t have become so strong, so it’s all Putin’s fault, really.” His remarks were greeted with applause across the length and breadth of America, which prompted him to impose an additional 67890 sanctions.

However, the news of Santa’s capture did not make everyone unhappy. One elf interviewed by this agency said he had been recently dismissed for questioning the Claus Corporation’s employment conditions. “It’s slave labour, pure and simple,” he said. “Don’t mistake it for anything else. We don’t even get lunch and loo breaks, let alone days off. As for unions, forget it.” Pressed further on the matter, he admitted he was hoping ISIS would chop Santa Claus’ head off. “That obese, judgemental, creepy, bearded megalomaniacal busybody needs it if anyone does. Maybe getting rid of his head will teach him to act like a human. I hope whatever ISIS’ demands are, nobody agrees to them.”

ISIS, however, did not appear to have any demands. “It’ll be ace to cut this ponce’s head off,” the masked spokesman said, waving his knife around Santa’s throat. “I always wanted head from Santa, you know what I mean?”

Santa, those who knew him said, looked wan and unhappy in the video. He could not be reached for comment.

The whereabouts of Santa’s reindeer are unknown, but there are strong rumours that they fled to Ukraine, where radical nationalists of the Azov Battalion caught and ate them. It's thought that Rudolf's red nose prompted them to declare him a Communist.

Further details will be provided as soon as they become available.