Ten easy questions for those who say Russia invaded Ukraine

Dear supporters of the hypothesis that Russia has “invaded” Ukraine, please answer these simple questions: 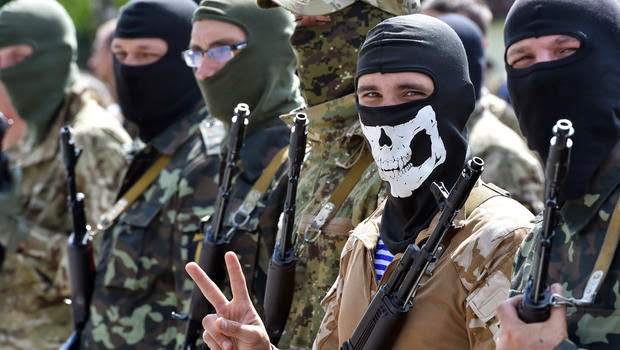 1.     Where are all the Russian forces that have carried out this “invasion”? Where are their vehicles, their support services, and their heavy weaponry? Where are the photographs proving this? Why is it that except for a black and white picture showing tiny vehicles, which could be anyone’s and anywhere, the West hasn’t provided one shred of evidence?

3.     If Russia invaded Ukraine, why is it that Russia is pressing for the rebels to settle for a solution within Ukraine, in peace talks? Why isn’t Russia recognising the independence of the Lugansk and Donetsk People’s Republics? Why, in fact, did Putin ask the Duma to revoke the authorisation it had given him to intervene militarily in Ukraine?

4.     If the civil war in Ukraine is between “good” Ukrainians and “evil” Russians, why is the Prime Minister of Novorossiya, Aleksandr Zakharchenko, an ethnic Ukrainian?

5.     If the war is between Russian forces and Ukrainian troops, why is it that the Ukrainians who have been surrounded prefer to flee into Russia, after which they are returned to Ukraine?

6.     Why is it that the Ukraine army finds it necessary to randomly shell cities in Eastern Ukraine if they’re fighting Russian troops?

7.  If the Russians have invaded Ukraine, why haven’t they – given the fact that the Ukraine army has virtually ceased to exist – made a push to take Kiev, something they could do with no trouble at all, and settle the matter permanently?

8.  What are Polish mercenaries and Scandinavian Nazi volunteers doing fighting on the Ukrainian side? And why does the Ukrainian side have openly Nazi formations like the Azov and Dnepr Battalions in the front line?

9.     Why is it that when, in peace talks, the delegates from Novorossiya said they were willing to settle for autonomy within Ukraine, it was “President” Poroshenko who refused to sign a peace deal?

10.  Why is it that though the West keeps accusing Russia of having given the separatists “sophisticated” weapons, they can’t show a single item which the separatists couldn’t simply have obtained from the thousands of surrendering and defecting Ukrainian Army troops?

I am not even going to ask you why the US and its Dutch, Australian and British allies, in conjunction with the so-called government of Ukraine haven’t released the information contained in the MH17 black boxes. Since you’re so convinced that Russia has invaded Ukraine, the questions I am asking should be easy enough to answer.

(And, finally, just as a bonus, here's an eleventh question for you:)

11. After all the endless lies the West has been telling since the Korean War, about Tonkin Bay, about the Kuwait incubator babies, about the alleged massacres in Kosovo and Libya, about Iraq's WMDs, about Assad's "gas attacks", why should we believe a single word you have to say about anything at all?