Warning: I repeat, this is not going to be a popular post.

In fact, if you’re American, you probably shouldn’t even read it.

If you still insist on reading it, and you end up feeling hurt or distressed, I repeat for the third time: you have been warned. 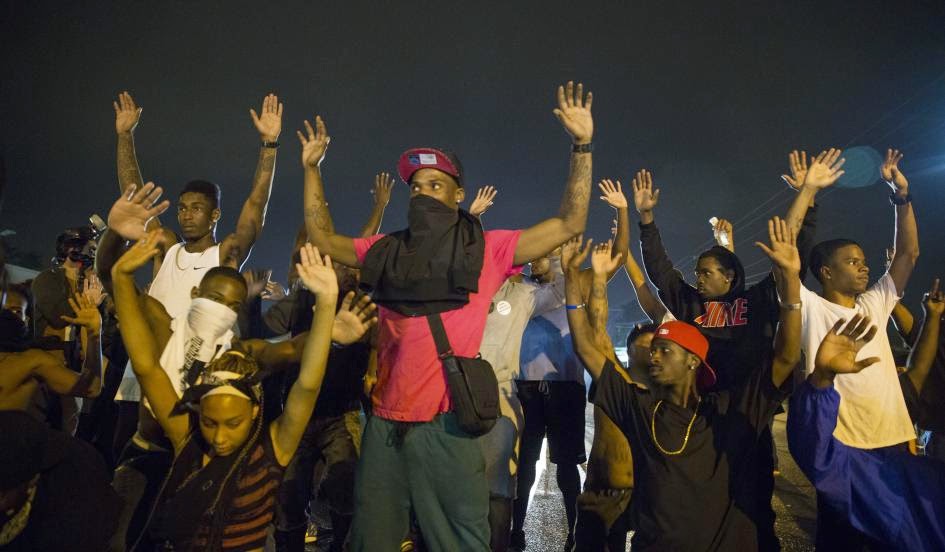 I am aware that there are some disturbances going on in a place called Ferguson, which is apparently a town somewhere in the United States. I have tried my best not to become aware of the details of what’s going on there, but from the saturation coverage it’s become mostly impossible to maintain ignorance.

Anyway, and don’t bother to correct me if I have got some facts wrong, this is what happened there: as far as I can tell, an unarmed black man was shot by a policeman. Subsequent protests by people were – and are – being suppressed by highly militarised police forces, which have used gas, rubber and real bullets, armoured vehicles, and imposed a no fly zone over the city.

Where was the American mass outrage then?

I have noticed something about the great mass of people in the United States; with a few, and very honourable, exceptions, they have a quite remarkable capacity to ignore or support all that their government is doing elsewhere, as long as it doesn’t impact them. This would not matter if their country hadn’t been an expansionist imperialist enterprise which calls itself the Exceptional Nation and arrogates to itself the right to interpret international laws as it sees fit. If it had been merely another country, what its people think and what its government’s policies are would be as interesting as the policies and beliefs of the government and people of, say, Tonga or Kyrgyzstan, Costa Rica or Burkina Faso.

But it is not, and that’s why their attitudes matter.

Think of the 11/9 attacks. Till that occasion, how many Americans had even spent a moment thinking about the phenomenon of jihad terrorism, though their own nation had been directly sponsoring and promoting this since at least 1979, and continues to do so to this day? If they chose to be wilfully ignorant, that was – and is – their prerogative; but when the effects of the things of which they prefer ignorance rebound on them, they can’t hide behind that ignorance.

Just rewind back to the Iraq invasion of 2003, when the vast majority of Americans were not only not against the (obviously unjustifiable) attack; they openly supported it. Only a few had the courage to oppose it, and a lot of them paid for that courage with their careers and reputation. Only when the coffins began coming back, only when the limbless, crippled soldiers began filtering back from Afghanistan and Iraq, did the mass of the American people finally turn against those two wars.

If the Iraq and Afghanistan invasions had gone according to the fantasies of the Bush cabal, if the resistance hadn’t ambushed and destroyed the occupation in the alleys of Fallujah and the souks of Baghdad, if the Afghans hadn’t fought and beaten back the Marines and US Army from Kandahar and Helmand, do you think the American people would have had a bad word to say about those wars now? Even though the invasions would have been still exactly as immoral, as illegal, as morally repugnant as they are now, they’d have cheered them on as a shining example of American exceptionalism and a triumph.

Since no Americans were killed in the first instance, the answer is, officially, none. And since the only Americans killed in the second instance were four “diplomats” involved in channelling weapons to jihadi terrorists, the outrage is limited to political sectarianism, and not to the fact of what they were doing there, and why.

Last year, when there was widespread – albeit muted – opposition to Obama’s plan to bomb Syria, the net had many “informed commentators” claiming that the people of the United States had “had enough of war”. If, however, the Iraq war hadn’t ended in what was so clearly a defeat that not even the US’ media machine managed to spin it to a victory, and Afghanistan obviously headed the same way, would there have been a reaction at all? In any case, it was not this reaction that made Obama back down; it was because he knew it would prove impossible to hide the fact that the terrorists were behind the chemical weapon attack that he changed his mind.

All the time that the CIA and FBI, and the other alphabet-soup organisations, were manipulating foreign governments, regime-changing them by “colour revolutions” or military coups, when they were eavesdropping on people’s conversations half a world away, the people of the US chose to remain blissfully apathetic. They only awoke to the evils of their own government when they, themselves, found that they were being eavesdropped on at every turn, when they had to queue up at the airport for intrusive security checks, when racial profiling went mainstream.

There is only one conclusion to be drawn from all of this: Americans, as a people, only give a damn when they, themselves, feel the pain. Only when the evils of the American Empire recoil on the people at home will they finally even deign to admit said Empire exists, and only then might they actually do something to bring it down.

This is why I have – and I’m quite willing to admit to it – no great sympathy for the protestors in Ferguson, and why I have deliberately decided not to learn more about what’s going on there. All the time when the Zionists were committing armed aggression against Palestinian protestors in the West Bank, and the US sent its police forces to be trained by those same Zionists, they remained passive. When these police forces were armed to military standards, they still remained passive. Only when the police were unleashed on the people themselves are they reacting.

Really, what did they expect?

To this day the net is filled with Americans debating whether the Republicans or Democrats would have handled any particular situation better or worse; whether Iraq is Bush’s fault or Obama’s; whether Killary Klingon will be a good president when she’s put in power in 2016. Remember the “Ready for Hillary in 2016” posters? What they don’t ever talk about is how it’s the Empire that’s at fault, not the two faces of the One Party.

Let me make a prediction: the (quite inevitable) day on which the first drone strike on US soil blows away a family, there will be another surge of discussion and outrage. If that family happens to be white, Christian and at least moderately affluent, the discussion will focus on the need for “oversight” and “checks and balances”. If it’s a black family, there will be a ruckus over whether this constitutes racism. And if it is a Muslim family, why then, the presumption will be that they had terrorist links, and the onus of proof will be on them.

In none of these three cases will the main discussion focus on the “elephant in the room” – that is, whether the drone campaign itself is moral, legitimate, and effective, or it should be dispensed with. That will only happen if, and when, drone attacks happen across the US with sufficient frequency that everyone will be affected, one way or another. Like for instance the Yemenis are affected, or the people of Waziristan.

Perhaps that day the people of the United States will look at each other and ask themselves, “What have we become?” And then they might do something about it.

Postscript: If you’ve read till here and were hurt/angered/disturbed – I warned you, at the start of this article. I warned you thrice.

You have only yourself to blame.