God at the Gates of Hell

God floated down to Hell.

It was all a mistake, he knew. He was God, the Greatest, the one who did good, the one who was good. Nothing in the Universe could exist without his decree. He was the Almighty, the Alpha and Omega, the beginning and the end and all things in between, Amen.

At his will, shrieking hordes of souls fell into the depths of damnation, or flitted like grey shadows through the eternal halls of limbo, finding no peace, no rest, nothing but to wait till time and space were no more. At his command, mighty civilisations crumbled to sand, the dry dust of the millennia blowing through their bones. At his desire, supernovas wiped out galaxies full of life that was, that had been, and that would never be.

How could he be sinking to Hell?

It had to be a mistake. He’d soon sort it all out, and be on his way again – to the other place. To the place where he knew that he belonged.

He stood in the antechamber to Hell. Behind a pair of doors forged of dragon’s wings, red, blue and green lights flickered. A demon sat behind a desk, watching him warily.

She was a very beautiful demon, God couldn’t help noticing, with exquisitely curled horns at her brows and wings the exact shade of a sunset over the ocean. Her eyes, slanted and glowing the colour of flames, studied him carefully.

It was time to lodge his complaint, right away.

“We know who you are,” the demon interrupted. She tapped a talon on a sheet of parchment on her desk.

“Good, then you know I’ve been sent down here by mistake. I don’t belong here.”

“We’re not disputing that you don’t belong here,” the demon replied. Lines of fire raced up and down the parchment from the tip of her talon. “You aren’t passing in through these gates...”

“I’m afraid,” the demon said, smiling very briefly, “not quite.”

There was a pause. God felt a chill pass down his spine.

“What does that mean, not quite?” he asked at last. “If I’m not going through the gates, then shouldn’t I be allowed to go?”

“You didn’t let me finish,” the demon replied. “I’d have said, you aren’t passing through the gates, because you have no right to.”

There was another pause, and then the demon spoke again.

“Have you ever thought,” she asked quietly, “of all the poor spirits you’ve tortured through the years, for no fault of their own? Have you ever spent a moment to ponder on the feelings of those who must spend the rest of forever in the torture of damnation, because you put them in it? Have you ever felt any remorse for the children who starved on the streets, who would never have been born but for your outlawing abortion? How about the millions your Holy Warriors have murdered in your name, from Crusaders to jihadists to Zionists? What about the animals tortured to death in sacrifice to you? What about...”

“And if they were, since you invented evil...what does that make you?”

The demon was no longer looking quite so beautiful. She raised a finger in the air. “Listen.”

God listened, and wished he hadn’t.

Over the rustle of flames, he could hear a new, rapidly growing, noise.

On the other side of the dragon gates, a mob was approaching. 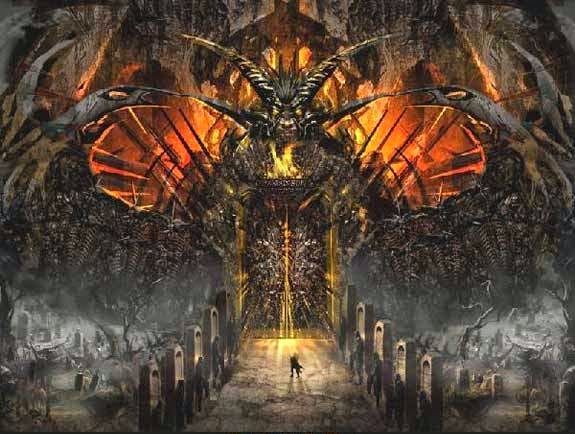