One day a dragon appeared high on the cliffs above
The beautiful little town of Smoke-on-the-Sea.
There he crouched, wings flapping, jaws agape.
The terror of such as you or me.
(Oh! He was a terrible dragon
Fierce enough to frighten away
Even the King's greatest dragon hunters. Even the King's magicians
Saw him and went away, abashed.)

He was a terrible dragon indeed.

This distressing fact much distressed
The good people of Smoke-on-the-Sea.
"Will someone not save us," they cried
"From this terrible dragon which crouches
Above us like a message from our mortality?
How will the tourists come, when this dread beast
Sits day and night awake on the cliffs? It will scare them away
And without the tourist trade, the town won't see another day.

"We did all we could," the townsfolk said, with a mournful sigh.
"Prayed for it to leave - prayed to the gods on high.
We'd have sent it our virgins too, you know
But there are none left, not one
From here to the earth's molten core.
It seems that there's nothing more for us
But to fade away without further fuss."

Up rose Jack the Monster Killer then
Whose shoulders had the strength of a stalwart ten
Tallest of all the heroes living by that distant sea
He lifted an arm thick as a gigantic tree.
"The dragon," he said, "is a poor thing -
I will give the fairest lady of the city
A part of the creature, and to the second-fairest
I'll give her the other wing."

The ladies of the little town gasped with joy
And danced till their feet could dance no more.
"We'll know now who's the fairest," they cried
"Let's all go down to the shore.

"We'll stand out on the sand
Out there on the beach -
As Jack the Monster Killer does his thing
We'll cling each to each.
And when he returns we'll cheer
We'll cheer till the sky turns red
With the dawn of tomorrow's sun -
And raise up Jack overhead.

"And he'll give the fairest one wing
The second will get one too -
And as for the rest, those envious wretches,
Well you know what you can do.
So let us away to the waiting sands
And cheer the hero, noble, true."

So they went down to that waiting beach
To the waiting beach they went!
And Jack the great Monster Killer
Donned his suit of armour big as a tent.
Then he trod on the highest cliff
Oh, Jack trod on crags so high!
He looked as though a tower of iron walked
Silhouetted against the darkling sky.

And he strode to the waiting dragon
"Get thee from hence," he said
"Although I'm mostly kind to animals
Flee or I'll strike you dead.
I'm Jack the Monster Killer
Of whom you may have heard, foul thing -
I've killed the Beanstalk Giant
And tied the moon on a string.
Fly away, abomination, you thing of doom
Get back to the hell that gave you spawn
Or when the sun rises tomorrow, on a stake,
Your head will greet the eastern dawn."

But the dragon was most unimpressed.
Oh! A jaded beast was he, you should have known
He opened a mouth like a drawbridge
And bit Jack to the bone.
Then he ate Jack in two bites
(Maybe a third, or maybe not)
For a dragon of that size, you see
Jack wasn't really a terrible lot.
And then he belched loud and long
For habits bad had he!
And that belch echoed from cliff to broken cliff
And from the sullen sky to the sullen sea.

(It wasn't really his fault though; he'd been abandoned as a dragon chick and his mother had never been around to teach him manners
She was a bad mother. Bad bad!)

Then the watching townsfolk scratched their heads
And yelled till their faces were mottled red.
But they couldn't think of what to do
Not even till it was time for bed.
(And if they'd gone to bed they'd have had awful nightmares
Of no tourists and that kind of thing. You know
How those dreams go.)

But then little Billy raised his hand
Little Billy, scruffiest lad in all renown.
"I'll go talk to the dragon," he said.
"I'll tell him to spare the town.
All you've done is to demand his death
Or his capture, at the least -
But none of you thought a moment
To go and talk to yonder beast."

"Go and be eaten," the townsfolk jeered
And laughed all their faces blue.
"That dragon ate Jack the Monster Killer -
What will he leave of such as you?"
"But if I do chase it off," said Billy boy
"What will you give me, pray tell me please?"
"Not less than your weight in gold" the mayor said
Shaking with laughter and quite at ease.

For how could a Billy beat a dragon
Let alone a dragon that stood
High above the cliff top there
Like an evil god of stone and wood?
"He'll never collect," they all said
Slapping each other on the back
"And it will be great entertainment to see him eaten -
Enough to make us get over Jack."
All the girls raised haughty faces
At the scamp who was so pert and bold
And swore to each other they'd never heard
So much greed for a mess of gold.

But Billy paid them all no heed.
No heed at all paid he!
And walked along the clifftop path
To the dragon on the scree.
And the waiting people saw
The dragon jump up and scream
Such a shriek as one might howl
In the midst of a terrible dream.

Then the beast spread mighty wings
And away over the sea he sped!
Not a trace of him was left behind
On the cliff above the mayor's head.
So Billy came down again
And asked for the gold he'd earned -
Do you know what they did to him?
Trial for witchcraft and he was burned.

For gold is gold, the mayor said.
Good coin, and the dragon's fled
And but for sorcery no one could
Chase it away, so he said.
"I could never suffer such witch to live" he declared
As Billy roasted on his pyre,
"That foul dragon was this witch's pet
I'll be bound, and swear on my sire
If ever such witch comes again
He or she too shall soon be ash
So beware lest you ask reward
In terms of gold or good hard cash."

So the townsfolk never knew
Just why the great dragon fled - and if they had
Been able to ask him themselves, they'd have found
'Twas because Billy just stank so bad. 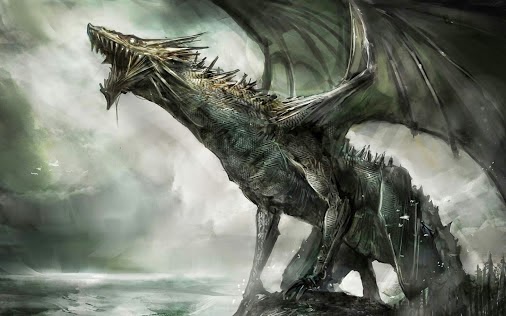