Hitler Redux: Vladimir Putin and the war on Homosexuality

He’s a tyrannical dictator who’s Evil Personified. He’s a vile, twisted psychopath who is the Greatest Threat To The World since Hitler. In fact, going by some of the photoshopped images floating around the net, he is Hitler. I don’t suppose I’m the first person to smell a bit of a rat in all the sudden surge of online hate against Vladimir Putin and his alleged war on homosexuality. In fact, it’s such a convenient – and such an obviously arranged – upsurge of hatred that said rat stinks to high heaven.

After all, if the history of the past twenty-odd years has taught us anything, it’s to be highly suspicious of any issue which arises suddenly, apparently out of the blue, and captures the popular imagination. I’ll just put a short, very short, list here:

1.     The Kuwaiti babies story: Back when Saddam Hussein’s army entered Kuwait, they were said to have ripped Kuwaiti babies from incubators and thrown them to the floor. An alleged eyewitness, a supposed nurse, testified movingly about it to American politicians and roused worldwide anger against the evil Iraqi regime. Of course, she later turned out to have been the daughter of the Kuwaiti ambassador to Washington, who had been coached by a PR firm, but she’d fulfilled her purpose.


2.     The WMD/Iraq Al Qaeda Alliance Story: We all know what that was. No need to elaborate further.


3.     The Kony Story: Hey, remember Joseph Kony, the monstrous African warlord who suddenly set the internets on fire a while ago? You do? Well, anyway, I’d analysed the brouhaha about him in some detail elsewhere, and concluded that it was a thin edge of the wedge meant to ease the way to a Western occupation of Central Africa. And, guess what? The West now has largish forces in Central Africa. Heard much of Mr Kony lately? No, I didn’t think so.


4.     The Gaddafi Story: You know, how he was “bombing his own people” and how Libya had to be attacked to stop a “massacre in Benghazi”. Well, again, we know what happened to that. And we know the lies about Syria which followed.

Also, we know the so-called “colour revolutions” of Europe, where non-Western aligned governments were overthrown by alleged “peoples’ revolutions” which installed pro-Western regimes; “revolutions”  which then turned out to have been instigated with the help of Western money channelled through non-governmental organisations. We know, by now, that substantially the same thing happened to the “Arab Spring” which is now turning fast into an Arab Winter.

Also, way back when I was a teenager and still used to read the American propaganda organ Reader’s Digest, I realised a very interesting thing: you could accurately predict when a US puppet would fall out of favour by reading the coverage, which would turn abruptly from approving to damning. I knew that Ferdinand Marcos was going down, for instance, when hagiographic coverage of his Imelda suddenly turned chilling; and when, after the end of the Iran Iraq war, Saddam Hussein suddenly got called a “brutal dictator”, I grew assured that he was moving into the cross-hairs. So, yes, it’s not something that I hadn’t ever encountered before.

Ergo, when Vladimir Putin suddenly gets splashed all over the internet as a gay-hating, tyrannical monster, I have this sudden urge, you know, to ask why. Especially when those who keep going on about his “hating gays” don’t seem to have much of a clue what he’s actually done to them. Just that he’s Hitler.

So, um, has Putin locked away millions of gays in concentration camps? No? Has he at least confined them to ghettoes, forbidden them to have any kind of economic or social relations with heterosexuals? No? Well, then, for heaven’s sake, surely he’s made being homosexual a criminal offence??? What do you mean, still no?

What did Putin’s vile law actually criminalise? In English, it bans, I quote, “the propaganda of nontraditional sexual relations to minors” – in other words, it bans, basically, gay pride rallies. And what’s the actual penalty if you defy the ban? You go to a Gulag for the rest of your life, don’t you?

Actually, no, you don’t. Being sent to a Gulag for life is what happens to people the Empire doesn’t like; look at Guantanamo.

What actually awaits those who break the Russian law? This (and I'm deliberately quoting from an anti-Putin site so nobody can accuse me of bias):

If you’re an alien. Foreign citizens or stateless persons engaging in propaganda are subject to a fine of 4,000 to 5,000 rubles, or they can be deported from the Russian Federation and/or serve 15 days in jail. If a foreigner uses the media or the internet to engage in propaganda, the fines increase to 50,000-100,000 rubles or a 15-day detention with subsequent deportation from Russia.

Fines, and at most up to fifteen days in jail and deportation. Doesn’t sound much like Hitler, does it? Doesn’t even sound much like what happened to Bradley Manning for exposing the Empire’s war crimes...and, incidentally, Manning is gay.

In fact, Putin wasn’t exactly overthrowing a liberal Russia; as one can see in this map, Russians as a society don’t have great sympathy towards homosexuals. I'll get to this again a little later.

Now, it seems strange that someone like Barack Obama, who supports cannibal headhunters in Syria, drone-bombs children in Yemen and Afghanistan, and ruthlessly persecutes whistleblowers, should be suddenly concerned about gay rights in Russia. It seems even stranger that his supporters should suddenly be gripped by this to the exclusion of so much else.

After all, it's hardly likely that until this law was passed - and, incidentally, it wasn't Putin who promulgated it, or even proposed it; he just signed on the dotted line - nobody had realised that most Russians don't much like gays, just as they also don't much like people with Central Asian features. In fact, Russian attitudes towards these things are so marked that even a relatively short visit exposes them clearly.

Also, there's the other thing that Russia bans - Wah'habist Islam, the Saudi version of the religion so beloved of jihadists. You don't see the Western "liberals" attacking Putin over clamping down on religious freedoms, do you?

But remember that mention of Bradley Manning? It brings us to a rather interesting point: the asylum granted Mr Manning’s fellow-whistleblower, Edward Snowden, in Russia. As we all know, or should know, Snowden’s arrival in Russia was not exactly something that made the top echelons of the Empire happy. In fact, said asylum made a lot of people very unhappy.

And it wasn’t the first crime that Putin has committed against the Imperial order, either.

Let’s see a few of the crimes that Putin has committed over the years:

1.     He put an end to the terrorist-run dystopia of the pseudo-republic of Chechnya, and stamped out the worst of the jihadist criminal gangs.
2.     He crushed the oligarchs who had looted the Russian economy dry during the regime of the great democrat Boris Yeltsin, a corrupt, drunken sot who had his army invade his own parliament when it wouldn’t kneel to his diktats.
3.     He began the process of turning Russia from a basket case back to a nation of some importance and influence in the world, something anathema to the imperialists of NATO.
4.     He defeated US proxy Georgia in the latter’s aggressive war against the breakaway provinces of Abkhazia and South Ossetia instead of rolling over as Yeltsin would surely have done.
5.     He repeatedly won the popular vote in elections which the West had to admit were genuine, despite media propaganda; and, besides, won them with much higher percentages of the vote than most Western politicians did.
6.     In order to forestall a manufactured, Western-created “colour revolution” which would send Russia stumbling back to its knees, he banned organisations from receiving funds from abroad.
7.     He – along with China – stood firm, and is still standing firm, against the Empire’s plan to overthrow the secular government of Syria and replace it with an alliance of murderous jihadists and cannibal headhunters.
And, last but far from least:
8.     He gave asylum to Edward Snowden, thereby directly humiliating the Nobel Peace Prizident and defying the Empire.

And so now we know why the anti-Putin tirade, don’t we?

First they tried with the canard that he stole the election, but it didn’t wash.

Then they switched to Pussy Riot, but nobody cared enough about them to make a difference.

They tried to crucify him over banning adoptions of Russian children by American couples, but there was the little fact that many of these couples could be proved to have treated the adopted children most vilely.

So now they’re telling everyone, in increasingly shrill voices to LOOK LOOK LOOK at the evil anti-homosexual Putin. Because if you don’t condemn him, you’re obviously a homophobe and a terrible person, besides being a supporter of Hitler.

Is it a surprise that American “liberals” are at the forefront of the campaign? The same American "liberals" who clamour for war against Syria and support Obama's drone bombing habit?

At this point it might be appropriate for me to state my position: I am a straight person who is also strongly supportive of gay rights. Sure, I completely agree that it’s silly to ban gay pride parades, but Russia isn’t exactly a liberal society, and if Putin’s law was put to a referendum it would be approved by an overwhelming majority. Which doesn’t make it right, of course, any more than racist laws would be right. But the Western “liberal” anti-Putin propaganda is far more hypocritical.

For an illustration of why it’s more hypocritical, let’s look at the nations which actually ban homosexuality, and often impose the death sentence for it. Let’s take a look at this map – especially the red and maroon bits. What do we see? 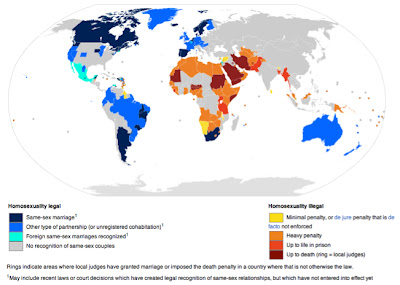 Well, well what do you know, the list of countries which can kill you or send you to prison for life for being gay includes US allies Afghanistan, Pakistan, Saudi Arabia, Yemen, Egypt, Burkina Faso, Mauritania, Malaysia, Uganda, “liberated” Libya and Somalia, and new ally Myanmar as well! Don’t hear anybody, least of all the Nobel Peace Prizident, screaming their heads off about them, do we? Of course we don't.

[While we're on the subject, check out the position of Syria - coloured light yellow, a country which doesn't actually impose any penalties on homosexuality, whatever's in the law books. Any guesses on what's going to happen to gay rights there if the cannibal headhunters, so beloved of the Western "liberal" brigade, take over?]

I rest my case.