With your background, Charlie, I'm sure you'll have something to say about this one. I wrote it in 2010 and it was published in Subversify Magazine. 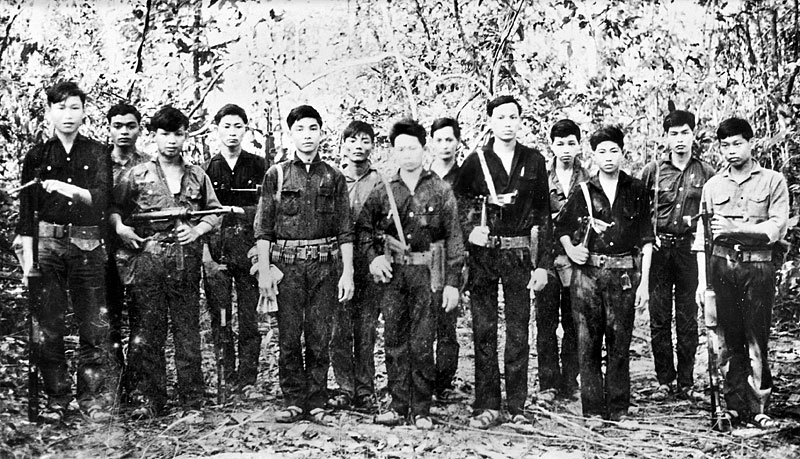 It had just turned dawn when Minh came out of the tunnel. The rain that had been falling all night had finally stopped, but the water was still dripping off the trees and the soil was muddy and so soft that his feet sank in almost up to the ankles. Minh took off his hat and wiped his face with the rainwater, letting it trickle into his eyes. He had not slept well, and the water cooled his burning eyes and forehead.
Around him the trees crowded like sentinels, and Minh always felt very small here in the forest. He felt that the forest resented him, personally, and that the trees sneered at him from all sides, like malign entities. Of course he would never admit it to anyone, not even to the other two members of his cell. If he did, they would merely laugh at him.
He was only sixteen years old, with a mop of black hair and prominent cheekbones. His lips were slightly too small, so that he always looked as though he was smiling, In three years he had been a schoolboy, this had got him into trouble with the teachers more than once. But that was a long time ago.
He walked down to the stream and plunged his arms into the muddy brown water, rubbing it over his head and face. His black pajamas were sticking to his body with a mix of rainwater, sweat and the mud of the tunnel, and he considered washing them in the river water, but there was no time today for that.
Across the muddy river, three egrets were pecking at the soil, probing busily for food. Minh watched them for a little bit, until there was a rustling to his right and Dung appeared. Dung was older, tougher and the leader of Minh’s cell. He stared at the boy with barely concealed disgust.
“Birds,” he said. “You watch birds. And we are supposed to be fighting.”
Minh shrugged. He had no particular desire to say anything, knowing that Dung would more likely than not ridicule him. Wiping his face on his checked scarf, he turned to go up to the tunnel.
“The Americans will come today,” Dung shouted up at him, “and you’ll still be watching birds.”
Minh said nothing. He felt intimidated by the others, because they were older than he, and because they had seen real combat. They had even fought the Americans.
He stooped low to enter the tunnel. Although he was small even for his people, the tunnel was constricted for him, and in the darkness he had to be careful not to bump his head on one of the supporting beams. He went down into the connecting tunnel and up again into the third tunnel, where the arms were. His carbine was there, carefully wrapped in sacking, and he took it out and cleaned and oiled it. There was the light of a kerosene lamp, but he could have done it in the dark, blindfolded. He had done it before.
On the other side of the little room, near the sacks of rice, Thanh sat, carefully priming grenades. The grenades were American, bought from the South Vietnamese soldiers on the black market. Minh thought Thanh was very pretty, and it made him extremely shy with her and blush when they were together. That was why he tried not to look at her or talk to her any more than he had to. He had a sneaking suspicion that Thanh knew exactly what was going through his mind and that it amused her mightily, but, of course, he could never ask her about it.
There was a scuffling noise in the passage and Dung entered, his hair wet and dripping. He looked around quickly. “A runner has just come from the village committee,” he said. “The Americans landed by helicopter on the other side of the river. Didn’t I tell you?” He slotted a magazine into his AK 47, the only automatic weapon the tiny village militia possessed. “We have to delay them as much as possible.”
Minh looked down at the SKS carbine. He dared not look up because he knew well enough that both the other guerrillas would be watching him. Mechanically, he made the weapon ready and got up. “Now?” he asked.
Dung and Thanh glanced at each other. “When else?”

They went down the slope in single file, quickly and carefully. Twice, Dung knelt to disengage spider-strand-thin trip wires connected to landmines, and after they had passed, he wired them up again. These mines were of great value. If the wire was pulled, they would bounce up from the ground and explode at waist height. One could slice an American leg off at the hip.
Minh walked along behind Thanh, looking at the ground. He had a metallic taste in his mouth, and wondered if it was fear. More and more, with every step, he was sure that he was afraid, but he could not say of what. Perhaps it was fear of combat, but a lovely girl like Thanh was already a hardened veteran, and as for Dung – he looked quickly up, under his eyebrows, at Dung. It was common knowledge that Dung was due to be sent to join a main-force regiment, a big step up from a part-time village guerrilla. Dung would never be afraid, whatever happened. Certainly he would not be afraid of a fight.
No, he thought, what he was probably afraid of was screwing up somehow. He knew well enough that he had no combat experience; not real combat experience. On two occasions he had accompanied raiding parties that had gone out at night to the American bases down in the valley, and both times he had fired off several bullets in the darkness at random, in the general direction of the American perimeter, but that was it.   He had never even seen one of the Americans he was supposed to be fighting.
Minh had not wanted to join the National Liberation Front, not really. But there had been little choice. The village had nothing any more, no functional school since the teachers had left, no chance at an education, nothing. The Front at least offered some hope, the other boys had said, and they had joined, one after the other, when the village defence committee had been formed. But Minh had not joined.
Not, that is, until –
Dung held up a hand suddenly, and then pointed. They were at the crest of a low hill. Before them the forest petered out, and they could see quite a long distance, down to the valley and the broad rice paddies. Still quite far away, Minh could see a string of tiny dots. One had to look carefully before one could be sure they were even moving, but, unmistakably, they were coming this way.
It was the Enemy. 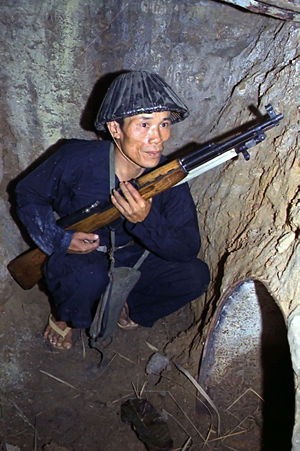 Then he thought again of the imprints of the American boots in the soil outside, and he saw the silver dots diving through the clouds, napalm dropping from them like fire from heaven. He thought about how Dung’s eyes had looked at him. And then he thought of Thanh as he had last seen her, naked and disemboweled. He thought of them and listened to the Americans crawling down the tunnel. And then he chambered a round and waited, crouching in the darkness, for the enemy to come to him.
The tunnel was dark and narrow, and inside the earth, the earth, above which all the things grew, and where the wind blew and the rain fell, the earth, where all the good things were.