Regular readers of this site may have noticed that while discussing Indian right-wing Hindu-centric parties, I routinely refer to them as “Hindunazis”. I’ve been asked in the past whether I’m implying that they’re Nazis merely because they’re right-wing, or because of my personal detestation of their policies.

Well, in case you're wondering, the answer to that is no. Nor is it because the Hindunazis openly admire their Nazi forebears, though they do. There are a lot of ignorant people out there who worship the Nazis without knowing much about them, and that doesn’t make them Nazis, just ignorant idiots.

No, it goes much deeper than that.

I thought a great deal before I labelled these Hindu parties (there are several of them, grouped together in a conglomeration called the Sangh Parivar) “Nazis”. Other terms describe them partially, but nothing so absolutely as Hindunazis, because of the many similarities between the two. Let’s have a look at a few:

The Nazis considered the Aryans to be a superior Master Race, who were responsible for virtually all achievements of the human race. The Hindunazis, who consider themselves Aryans, think themselves to be a superior Master Race, and claim that ancient Hindus had already invented virtually everything that is now being “reinvented” by humanity.
The Nazis identified a national “enemy” – the Jews – who were blamed for just about everything (as well as being dubbed agents for foreign interests and Bolshevism), and proceeded to block them from public life and confine them to ghettoes, imposed economic blockades on them and began anti-Jewish pogroms on the flimsiest excuses (until they began the mass deportations and the death camps). The Hindunazis identified a national enemy – the Muslims and secondarily the Christians – dubbed them as agents of Pakistan and the West, imposed in at least one state (Gujarat) which they control completely, an economic blockade on the Muslims, have pushed them into ghettoes after a pogrom, and are actively trying to marginalise Christians and Muslims wherever they can. Just as the Nazis had slogans calling for the destruction of the Jews, the Hindunazis had a slogan, Pehle kasai tab Isai (first the butcher, i.e. Muslim – the butchering business being predominantly Muslim-dominated – then the Christian). In practice the Hindunazis have targeted both religions equally in areas where they were strong and the other side vulnerable.

Before attaining power, the Nazis attacked intellectual dissent by violent mob oriented means (for instance, by disrupting screenings of the 1930 film version of Erich Maria Remarque's All Quiet On The Western Front). After attaining power, they organised the burning of books they didn't like. The Hindunazis have repeatedly used mobs to assault art galleries and research institutes in the name of "protecting Hindu sentiments", and when in power have banned books they didn't like.

The Nazis portrayed their chosen “internal enemy” as a greater threat than any external foe. The aforementioned Hindunazi ideologue Golwalkar identified “three major internal threats” – in this order, the Muslims, the Christians and the Communists – who were “a far greater menace to national security than aggressors from outside."

The Nazis subverted the forces of law and order and made themselves virtually immune to prosecution, no matter what crimes they might commit. The Hindunazis have systematically sidelined honest police officers and made themselves virtually immune to prosecution by “saffronising” (saffron being the colour identified with radical Hinduism just as green is with Islam) the police force and filling it with their ideological followers. The classic case was in that aforementioned Gujarat state where the police was ordered to stand by and watch while the Hindunazis carried out their pogrom, and not infrequently joined in looting, raping and murdering Muslims with great enthusiasm.
Despite calling themselves “National Socialists”, the Nazis were aggressively anti-socialistic, openly and extremely pro-business, crushed trade unions, and clamped down on all left-wing activity. The Hindunazis are openly the party of the business class, have crushed the trade unions wherever they were in a position of power, and oppose any form of liberal and left-wing activity.
The Nazis were militaristic, worshipped war as the first option, condemned pacifists as "traitors", and tried to infiltrate the military services with their ideology (such as promoting officers sympathetic to their cause to positions of power), as well as setting up armed militias on the side. The Hindunazis are militaristic, worship war as the first option, condemn pacifists as "traitors", and have their own armed militias as well as infiltration of the defence services. And they have, like their non-Hindunazi right-wing competitors the Congress, systematically promoted officers sympathetic to their ideology to staff positions. 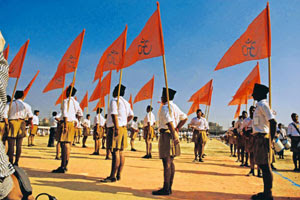 The Nazis said the Germans should breed prolifically in order to produce soldiers for the nation and also to outbreed competing races. The Hindunazis say Hindus should breed in large numbers (the Rashtriya Swayamsevak Sangh, which serves a kind of ideological centre for the various Hindunazi parties and gives its name to the Sangh Parivar, declared a few years ago that each Hindu couple had a duty to produce not less than seven children) to outbreed other religions and to produce soldiers for the nation.
The Nazis perverted history, deliberately confused mythology with fact, and promoted astrology until they began to confuse fact with fiction and lost all touch with reality. The Hindunazis promote theological legends as historical fact, deliberately rewrite history, promote astrology (which they made into a university subject during their period in power), and have repeatedly demonstrated that they have almost no link with reality anymore.
The Nazis wanted Lebensraum – the idea of a Greater Germany – in the East at the cost of the Slavic nations. The Hindunazis have long at least pretended to the people of India that they want to expand the nation’s borders to the West, up to, and beyond, the River Indus in Pakistan.

The Nazis tried to revive Nordic mysticism and tried to use it to explain away their crimes. The Hindunazis tried to revive Vedic mysticism and if they had succeeded (as they still might) would have used it as an excuse to explain away their crimes.
The Nazis loved the idea of Empire, were enamoured of the dominant imperialistic power of the time, Britain, and went to war against that country with extreme reluctance. The Hindunazis love the idea of Empire, and have been cravenly appeasing to the dominant imperialistic power of today, the United States of America, and the dominant imperialistic proxy of that power in Asia, the Zionazi pseudostate of “Israel”. They came within an ace of sending troops to support the invasion of Iraq in 2003, and one of their prime ideologues cheered the invasion on the grounds that Muslims were being killed. It’s not their fault that their successors in power, the Congress, have been even more cravenly appeasing to these same imperialists.

The Nazis tried initially to solve the "Jewish problem" by forcing the Jews to emigrate, and only later came round to the idea of concentration camps like Dachau (and, later still, extermination camps such as Auschwitz). Hindunazis and their followers have often said that in India, Muslims should have no place, since they were given their "own country" at independence and should be forced to emigrate there. I've myself heard Hindunazi drawing room conversations where it was openly said that Kashmir could be let go, but only if all Indian Muslims could be forcibly deported there.


The Nazis had a "martyr", SA man Horst Wessel, who was raised to almost mythological status after his death, the circumstances of which were obfuscated. The Hindunazis have a "martyr", politician Shyama Prasad  Mookerjee, whose death in custody has made him into a hero after his death, even if the exact circumstances of that death remain unclear.

The Nazis used a fire they instigated, aided and abetted (the Reichstag fire) to crack down on political opposition and begin a reign of terror they had planned well in advance. The Hindunazis used a fire on a train, which a judicial commission found had started accidentally, to begin their preplanned anti-Muslim pogrom in Gujarat.

As Hugh Trevor-Roper stated in The Last Days Of Hitler, the Nazi government wasn’t a government so much as a court with various ministries and bureaucracies competing for power and not afraid to sabotage the common effort to do so. The Hindunazis are a court with competing factions busily stabbing each other in the back, and this is why they may yet manage to lose the next election even though their Congress opponents have earned virtually everyone’s visceral hatred with their corruption and mismanagement.

The Nazis said the Germans were a single people, a Volk (which really translates more accurately to “tribe” than “people”). The Hindunazis claim that Hindus are a single people and should therefore all eat the same food, dress the same (approved) way, worship the same gods, follow the same (mythologised) “culture”, and speak the same language, despite the fact that India is probably the world’s most heterogeneous nation and Hinduism is more a collection of broadly similar religions than a single unitary faith. There is, for instance, almost nothing in common between a Manipuri and a Marathi in culture, language, ethnicity or religious practice – and yet they are both Hindu.

The Nazis attempted to “Germanise” the Volksdeutsche (ethnic Germans settled in other nations), many of whom barely spoke German and had little to no interest in Hitler’s plans for their future. The Hindunazis similarly have attempted to Hinduise the tribes of the forests of Central India, most of whom were never Hindu and have their own religions and customs. And just as the Nazis used the Volksdeutsche as cannon fodder in their war, the Hindunazis have used these tribespeople as expendable militia in their anti-Muslim and anti-Christian offensives.

There are many other similarities, including the use of "Aryan" symbols (the swastika for the Nazis, the trident for the Hindunazis), the notion of a nation with “eternal frontiers” that must be preserved at all costs, and the like; but these aren’t as important as those I’ve already listed.
Of course there are differences: the Hindunazis (with the single exception of the Hindunazi party from Bombay, the Shiv Sena, and its offshoot the Maharashtra Navnirman Sena), unlike the Nazis, aren’t ruled by a single all-powerful Führer, but prefer instead to follow a succession of venerable dodderers who lead the RSS and its affiliates. Also they  have been nowhere near as successful as the Nazis at taking control – in part because India is such a diverse nation ethnically and religiously and because Hinduism is (as I’ve said) by nature an amorphous religion which means many different things to many different people.

But the similarities outweigh the differences so thoroughly that I don’t see what other term can actually be applied to these people.