In the evening when the sun was low in the west, we went down to the beach.

It was then that the wind came in off the ocean, so that the smoke from the factories blew inland, and the beach and the sea were painted by the sun, the wet sand at the water’s edge glowing gold. One could almost imagine that the factories and smoke didn’t exist, so long as one didn’t turn around.

The girl held on to my hand, her fingers clamped round my wrist, and those who saw us must have thought she was my daughter. I had only met her the previous day, standing in the middle of the street, looking around with wondering eyes. At first I’d planned to walk by, but something about her stopped me. Maybe it was simply that I was growing soft in my middle years and didn’t like he idea of her being knocked down by a car, or abducted for sport, or something. So I’d waited for a break in the traffic and walked over.

She’d looked up at me cautiously, and shook her head just a little. I’d guessed her to be five or six, skinny to the point almost of emaciation, and dressed in boy’s clothes which were too large for her, an oversized green T shirt and dingy yellow shorts. Her legs and feet were bare and dirty.

“Well, then,” I’d tried again, “what are you waiting here in the middle of the street for? Come to the side at least.”

She’d looked ready to bolt, and a car was rushing along, one of those driven by testosterone-fuelled teenagers, far too fast and with music blasting out of the open windows. I’d been afraid she’d bolt right into the path of the car, and so I’d grabbed her by the shoulder and held her tight.

“Come with me,” I’d said, and pulled her to the side of the street. “It’s not safe there in the middle.” And rather to my surprise, she’d come without making any further attempt to run away.

“Look,” I’d said to her, bending so I could look her in the eye, “where are your parents? You aren’t all alone, are you?”

At first she wouldn’t respond, but little by little she began talking. Her accent was broad and rustic, and I had difficulty understanding everything she’d said, but it appeared that something had happened to her parents. She wasn’t at all clear what had happened to her mother, but her father had “gone away” recently, and she’d been somewhere “bad”. I’d got the impression that she’d run away somehow. Her name was Mana, she’d said, and she thought she was eight years old, but wasn’t quite sure.

In the end I’d taken her home with me. I still couldn’t say just why, except that I hadn’t known what else to do. If I’d left her on the street, I couldn’t have lived with myself. So I’d taken her home, fed her, bathed her and cleaned her up, and given her a change of clothes. Unfortunately, they were my clothes, so she still wore a man’s T shirt and shorts, but at least they were clean. Afterwards she’d fallen asleep on the sofa while I was washing up, and I’d covered her with a blanket and left her there.

In the morning I’d been half-certain that the whole thing had been a dream, but there was Mana, still sleeping on the sofa, the blanket puddled on the floor beside her. I’d made us both breakfast and woken her after it was ready. Fortunately, I didn’t have to work today, so we could sit together and eat and after that watch TV. Actually, I sat beside her and watched her as she watched the cartoons, open-mouthed.

After lunch, when the haze of smog lay heavy on the streets, she went back to sleep and I tried to read. Instead, I just sat and stared at the pages, without being able to read anything.

Finally, then, it occurred to me to wonder just what I intended to do with her. Clearly, finding her parent or parents ought to be my primary duty. If I couldn’t do that, I should hand her over to someone who could find them. I snorted aloud at the thought. Whom should I give her to, the police? That was a laugh.

Maybe, the thought came to me, I could keep her. It wasn’t really a solution at all, I knew, because I didn’t have a steady job and couldn’t afford to bring her up, quite apart from having no legal claim to her. But I remembered how she’d looked the previous day, stranded in the middle of the street and wanting to bolt through the traffic. I couldn’t, wouldn’t risk putting her back in that again.

By the time she began to stir, I’d begun to feel trapped in the flat, its air heavy and clogged in my lungs. “Mana,” I said, “let’s go out for a walk.”

She nodded, readily enough but without much enthusiasm, and I remembered that walking was something she’d probably done a lot of. “The beach,” I said then. “We’ll go walk on the beach. It isn’t far. You haven’t seen the beach, have you?”

So we went down to the beach. It wasn’t far from the flat but I almost never went there any longer. I hadn’t been there for months – perhaps a year or more. I tried to remember the last time I’d been there, but couldn’t.

“Do you like it?” I asked, when we’d walked down to the sand. Mana was looking at the waves and the wet smooth sand by the water, with an expression of intense concentration on her face. She didn’t say anything, but her hand squeezed tight on my arm.

The sun was slipping down into the sea, and the wind blew fresh and tangy off the western horizon. Far in the distance, I could see a very large ship, perhaps a tanker, but otherwise there was nothing to show that we were not in the world of a thousand years ago, where nothing modern had poisoned the waves and the wind. I did not want to turn round.

“Do you like it, Mana?” I asked again. It seemed suddenly important that I get a response from her.

“Yes,” she said, and paused, digging her toes into the sand. The she looked up at me. “Do you come here every day?”

“No,” I replied, and laughed without meaning to. “I haven’t come in a long time.”

“It’s not easy to explain, Mana.” Back when I was a boy, I’d spend entire days on the beach. Those days, when school was closed for the vacation, we’d get together, a group of us, and sometimes we’d stay on the beach through the night as well, making bonfires of gathered driftwood. My parents had in any case not really cared what I did with myself as long as it didn’t adversely affect them, so I sometimes spent three or four days away from home at a time.

Those bonfires on the beach were never very good, I remember, difficult to set alight and burning feebly or not at all. but we didn’t care. It was worth lying back on the sand and laughing, and watching the stars, a million stars in the inky sky over the sable sea.

“We could see the meteors falling,” I began telling her, and then remembered that she wouldn’t even know what a meteor was. She was looking up into my face, the same concentration in her eyes, as though she was fixing every word in her memory.

“At night,” I told her, “we’d go swimming in the ocean.” I remember how it felt, being immersed in the vast black water which went all the way round the world. One could dip one’s head underneath and feel that one was in the depths of space.

“Once,” I said, “I swam with dolphins.” They’d come completely unexpectedly, the water exploding all around with them, smooth torpedo shapes slicing through the dark, full of the joy of living. I’d touched one with my hand, the slick skin smooth under my fingers, and wished I could have been a dolphin, to swim away across the world and never come back.

Nowadays there are no dolphins, and the water is clogged with plastic waste. I’ve been told that sometimes it’s covered with a sheen of oil, when the big tankers like the one on the horizon wash out their ballast into the sea. And at night the light pollution from the city blanks out the stars.

“We used to dance on the beach too,” I said. We used to choreograph our own routines. I had a sudden memory, like a snapshot – six boys jumping together, framed in silhouette by the setting sun. I’d been one of those six boys, screaming my throat out with the others, full of the joy of being alive.

Nowadays nobody dances on the beach. Nobody has the time or desire, and the few boys and girls we saw were clustered in little groups, poring over cell phones and not looking up at the sunset at all. And of the six of us who had been there that day, I only knew one other. I worked for him sometimes. He’d grown fat and respectable, never left his office, and would have been horrified if anyone mentioned he’d ever danced in the sunset on the beach.

Remembering, I felt bitter, thinking about how it had been and how it was now, and decided it had been a mistake to come down to the beach at all. We should have gone to a park or a mall, or something. It wasn’t too late, anyway.

I looked down at her, startled. She was watching the sunlight on the waves, and the pink of the evening sky. The tense expression was gone from her face, and it was filled with a kind of peaceful joy.

And then I saw, for a moment, through her eyes, which had never known anything of the sea; and the setting sun was a globe of fire in a welter of colour, and the world was beautiful, the world was fresh and new. And following on that came another thought, that maybe I could keep her after all. At least it was worth the attempt – if she wanted to stay with me. If she didn’t...

But that I could worry about tomorrow.

She looked up at me, solemnly, not understanding. “What?”

She looked at it and smiled shyly, nodding. 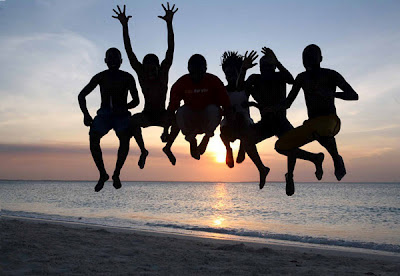