The Burning Question: How to Lose Hearts and Minds

Statutory Warning: As usual, this post is a statement of my beliefs, my sources are as indicated, and I am in no way responsible for any fights, quarrels or disagreements arising from discussions on this article on any website or other medium where it appears or is discussed. 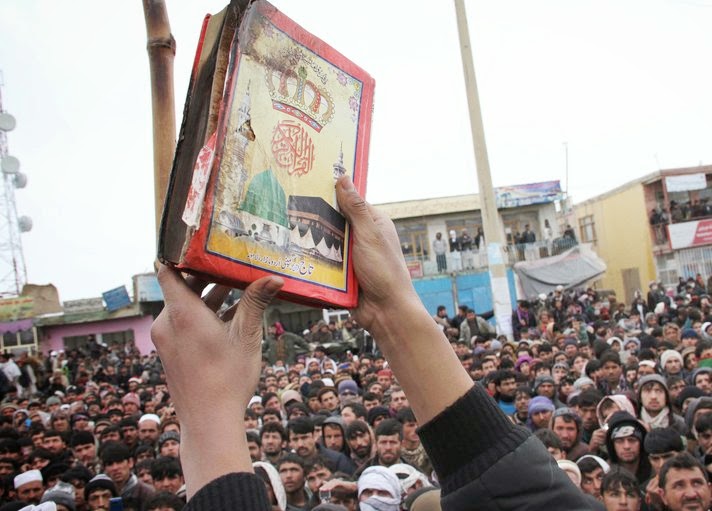 Something more than merely some Qurans lies smouldering in a garbage pit at the Bagram Airbase outside Kabul, where they were tossed by uniformed US soldiers before being rescued, partly charred, by Afghan workmen. What lies there, in cinders, is the last forlorn hope of the Imperial project in Occupied Afghanistan.

And, tempting as it is to look at it in those terms exclusively, it is not about a few fanatical Muslims losing their cool about a few burned Qurans.

How do we know, in fact, that it is not about a few burned Qurans, however much uninformed and bigoted individuals in media and elsewhere insist on the contrary? How do we know that it isn’t just because Muslims, for some irrational reason, get violently upset if their holy book is sent up in smoke, whether or not that holy book is actually holy or merely, as some would insist, a terrorist instruction manual?

We know it, because the Afghans themselves clearly and unambiguously say it’s not about burned Qurans.

After all, it isn’t as though the Afghans have been exactly living in paradise under the Empire’s colonial occupation (“liberation”) since 2001. They have had the world’s most venal puppet “government” imposed on them, one which cannot even control the capital but claims legitimacy. The rest of the nation is a bone for contention between savage warlord armies of “freedom fighters” (that’s what the term Mujahideen means, as in the “heroic freedom fighters” the West paid, armed, trained and promoted against the USSR in the eighties and then left to their own devices) and a resurgent and quite clearly unstoppable Taliban insurgency. There is no such thing as rule of law barring the (instant and brutal, but at least not corrupt) justice of Taliban mobile courts. There is no hope, nothing to look forward to, except more of the same.

Meanwhile there are the occupiers, who claim to be “liberators” and friends, yet do such charming things as routinely bomb civilian homes and weddings, kill children gathering firewood and then claim they were armed, murder civilians for sport and collect body parts as trophies, urinate on dead Afghans (we don’t even know whether they were Taliban or murdered civilians), break into their houses in the dead of night, and pose with Nazi SS flags. These are the occupiers who shoot unarmed protestors and then claim that they were “restrained” because they didn’t kill even more, and who can do nothing to prevent the return of the Taliban, something that grows more inevitable by the day.

With friends and liberators like this, the Afghans may be justified in thinking, who needs enemies?

So, the Quran burning is just the final straw that broke the camel’s back, the spark that set off the conflagration. The anger simmering needed a fuse, and the ineptness, arrogance, and stupidity of the occupation provided that spark.

Always, in such cases, the ideals or motives of the perpetrator don't matter. It's the victim's view which matters, and the victim who reacts according to his own perception of the situation. The Empire might have been sincere in its motives (though, as will be discussed in a moment, there's no reason to think it was) - but if the Afghans are convinced it wasn't, then that's all that matters.

That is why Afghanistan went up in flames. Not because of irrational anger over a book, but because it was  the final drop of humiliation that made the cup run over.

Often, in such a situation, there are some things that tend to get overlooked, like driftwood adrift on a sea of data, which carry the actual important information, if only one knows where to look, and is interested in looking. There are several such things in this particular situation, which actually are of far greater import than the protests themselves.

First is the little fact that the response of General John R. Allen, the U.S. war commander in Afghanistan, that all U.S. military personnel in the country undergo ten days of sensitivity “training in the proper handling of religious materials.”

If after occupying a nation for over a decade, a nation which is well known for being deeply religious, the occupation forces still have to be given “sensitivity training” in handling “religious materials”, that displays a failure so staggering that mere ineptness can’t begin to cover it. Even the old imperialist powers realised that in order to rule over a restive populace, local customs must be, as far as possible, respected. But the old imperialists, for all their faults, knew that they were mortal. The new Imperial levies cannot even begin to assimilate the idea that other peoples can have different cultural mores and value systems than their own, and therefore see no reason to treat any such cultural and religious mores with anything but contempt. Systematic brainwashing meant to instil hatred of Islam and Muslims (often given such charming appellations as “ragheads,” “diaperheads” and the like) has its own part to play. It’s even more pathetic that ten days of “training” is supposed to instil “sensitivity” that over ten years of colonial occupation could not.

Next is the case of the two American officers, a lieutenant colonel and a major, who were found shot dead inside an office in a “secure” portion of the Afghan Interior Ministry in Kabul after they allegedly mocked the protestors. Now, more and more Afghan troops and policemen are beginning to turn their weapons on their “liberators”, so in itself the shooting isn’t anything new. But in this case, there’s something else that’s important – the fact that this particular shooting happened in a “secure” part of the Interior Ministry, the command and control complex. The word “secure” here meant that most Afghans themselves had no access to that part of the building, even if they worked in the Interior Ministry, though officers of the American occupation forces had no such restrictions.

If after ten years of “partnership” (or whatever the current dispensation in Afghanistan is supposed to be), the locals can’t even be given the run of their own government buildings, there’s such a deficit of trust that it can’t ever be bridged – least of all when the metaphorical ceiling is falling down on the occupation’s collective head. And the extent to which the rot has spread is indicated by the fact that they were shot dead inside that “secure” office, by one of the (presumably tried and tested and found loyal) few Afghans who were permitted access. Whether the man was a Taliban mole or acted on his own can’t be independently known, because he successfully escaped – but that is less significant than the fact that someone at such a high level went over to the enemy. This means, just as clearly, that there is no such thing as a friendly Afghan any longer, where the occupation forces are concerned.

Not that this little fact was unknown to the troops on the ground, the ones responsible for training and liaising with the so-called New Afghan Army and police. That these forces are disasters is to put it mildly; but that’s not the point. The point is that they are not just far too riddled with inefficiency and corruption to ever take care of their nation’s security, they are lethal; not to the Taliban they are allegedly fighting, but  to their “allies”, the occupation forces who live among them and train them. No partnership can possibly survive if one side has to constantly guard against the threat of having its throat cut by the other. But the cases of this kind are increasing very rapidly since the Quran burnings, leading to the Empire's European vassals hurrying to pull out their own contingents from the line of fire - and, logically, the reason is that latent anger has been sparked to active violence by the Quran burning, with even surrendered Afghan insurgents returning to the resistance.

It’s not enough to glibly say that the Taliban are taking advantage of the anger over the burnings, as if it were some kind of foul in a game. Of course the Taliban are taking advantage; anyone would in such a situation. If the circumstances were reversed, the Empire would have taken advantage of the situation, quite unapologetically. To state or insinuate otherwise is a travesty of common sense.

Having put itself in an untenable position, the Empire then promptly made things much worse for itself. After a lot of natter, the Obama administration “apologised”. Said “apology” was another travesty, because after making it, in order to deflect Republican criticism, the Nobel Peace Prizident promptly backtracked, saying

In other words, he apologised not because he was sorry, but because it allegedly, as he also claimed, “helped calm things down”. It was an apology of convenience, not one of sorrow, and was seen as a hollow sham by Afghans, who took it as a further marker of contempt. In fact, since apparently Obama didn’t consider the possibility that the Afghans might be aware of his explanations for his apology, it is difficult to see what it could be taken as except a fake.

Ultimately, whatever twists and turns the occupation resorts to, the Afghan enterprise has failed. Nobody can win if they create more enemies than they eliminate, and there is nothing the Empire can do in Afghanistan that won’t make the situation worse for itself. They have never set a foot right after the Taliban were (temporarily, as it turns out) ousted in 2001, and they can’t set a foot right now if they try. Even if they leave tomorrow, they will leave as hated foreign interlopers, not as friends and liberators.

So what can the Empire do to save the situation? In a word: nothing. On the battlefield, the world’s most powerful military has been fought to a standstill by illiterate peasants in flip-flops and turbans. Off the battlefield, it has been stymied by its own arrogance, greed and hubris. Its defeat is complete and total.

I suppose, in the aftermath of ruin, the Empire could send in nuclear missiles and turn Afghanistan into a sea of molten glass, and try and make up some plausible sounding excuse for why that had to be done. But then such an excuse wouldn’t fly even among the domestic populace, who are now overwhelmingly against the war. And, more importantly, the Empire then wouldn’t have access to the pipelines and the minerals under the ground, which, of course, is the real reason for the Afghan occupation.

But then the Empire isn’t getting them anyway. The End In Afghanistan

How We Lost The War We Won