You always wanted to write like Stephen King, did you? The Master of Horror himself? 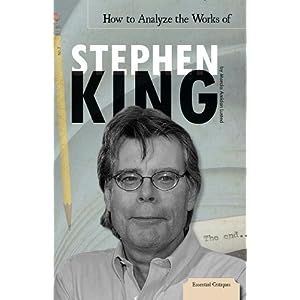 Well, if you did, look no further. This is a Public Service Tutorial by Bill the Butcher. No charge.

So, what should you do?

To start off with, you need some kind of plot. It doesn’t necessarily have to be a highly structured plot. In fact, it doesn’t even have to make the slightest bit of sense. I’d even go so far as to say that it shouldn’t make a bit of sense; that sense is your enemy. Eschew sense.

So, let’s construct a plot. For the purpose of this article, we’ll say that the plot involves a demon or something in your…vacuum cleaner. That sounds about right.

A few years ago, here in the little town of Castle Crock, Maine (where else?) there was a serial killer named Harry Hotpants. Mr Hotpants, who enjoyed killing children (and if you want to write like Mr King, children ought to figure prominently in your list of victims) killed himself in some peculiarly gory fashion. I’ll leave the fashion up to you, but it should involve blood, pain and suffering.

Well, to move on. Years later, your protagonist (who should be white, middle class, American, and confused about where his life’s heading –that is very important. Do not attempt to introduce a protagonist who is European, black, East Asian, upper class, or a labourer; however, if you have a black character, he must be a Magical Negro, existing only for the purpose of selflessly helping the white hero) sees this vacuum cleaner in somebody’s garage sale, and it absolutely calls to him for some reason. He doesn't really need a new vacuum cleaner, but he buys it anyway. What he doesn't know is that the vacuum cleaner has Harry Hotpant’s ghost inside it, brooding and waiting for the chance to strike.

OK, there’s our plot. Now what?

Now, if you are to write like Mr King, it’s essential that you understand something – you must stretch it out. Make it long – very, very long. You can’t call yourself an honest King imitator unless your tale is at least six times as long as your plot would normally warrant.

For instance, make sure in this case to introduce totally irrelevant plot devices; say a neighbour who scratches his testicles in public, squirts tobacco juice, says “Ayuh” every ten words, and has a back story which has nothing to do with the advancement of the plot, but does add another thirty or forty pages. You ought to make sure this isn’t a nice guy, so that you can have him bumped off in a grisly fashion by your possessed vacuum cleaner.

Now, how do you get your vacuum cleaner to kill people? Let it turn on by itself, extend its nozzle over the victim’s face, and suck out their breath. Does that sound ridiculous? Good, because that’s what it should sound like. You really can’t get too ridiculous where this is concerned. Make sure even cutting off power doesn’t stop it!

Now, make sure you put in as much gross-out as you possibly can. As King himself said, “if you can’t go for the scare, go for the gross-out.” So, even if you think you ought to try black humour instead, don’t. No, you’d be much better off disgusting your readers by describing the vacuum cleaner ripping the lungs of its victims out by the roots, or something similar. And maggots. No story is complete without maggots spilling out of something, somewhere. Maggots are scary, my friend. Take it from me. Or, rather, take it from King.

Another thing: never fail to include product placements in your text. Your protagonist’s kids can’t eat generic cereal or wear sneakers – they will have to consume Rice Crispies and their feet will be encased in Nikes. Do you Xerox, er, copy?

He turned to his desk, looking at the paper and

(rustling autumn leaves in the rain)

Then, while we are still on styling, make sure to include inappropriate emotions. If the vacuum cleaner has chased your protagonist’s kid into a closet and is sucking at the door to rip it off its hinges, don’t have him thinking, “In a moment it’s going to tear the door off and suck the life out of me.” Instead, say something like this, no matter how ridiculous it sounds:

“Another minute, and it’s gonna rip that door off and then can you breathe, hey sonny? Can you goddamn breathe?”

Or, even, “Can you fucking breathe?” Harry Hotpant’s ghost, always, must be abusive; all demons, ghosts or other supernatural forces are abusive. And in the King world, “fucking” is the heights of abuse.

Did I mention the necessity of ignoring science? If your story has bats, they must be rats with wings. If your story has a rabid dog, it must be a canine psychopath with nothing in common with how a real life rabid dog actually behaves.

Look, there’s a big flaw in most authors’ writing – internal consistency. You must fight against all temptation to have your story follow some internal logic. If one thing happens under a certain set of circumstances to your protagonist, ensure, at all costs, that the same thing doesn’t happen to someone else even under the identical circumstances.

(I should give an illustration. Suppose your protagonist can “flip over” to another world, where everything has a pre-industrial equivalent to this world’s things, and his clothes, money, everything changes. Well, then, some things ought to go over unchanged, like, say, a train full of weapons; and when he does something twice, the first and second times oughtn't to have the same effect, either.)

And, lest I forget, if you’ve ever written anything else in the past, make sure to include passing references to it, even though nobody but someone who’s read all of your earlier work will understand what on earth you’re going on about. Like, in the middle of your vacuum cleaner story, include a reference to your other story, the one where the psychotic fairy godmother goes around conferring lethal powers on Cinderella, and she burns her stepsisters to a crisp. OK?

And, of course, never forget to overwrite, overwrite, overwrite. Restraint is for wusses. Flamboyant, relentless overwriting is essential if you want to imitate King. And, never, ever, fail to leave an open ending to your story. You never know when you might want to do a sequel.

Want the perfect template on which to base your King imitation? I would heartily recommend Christine, that novel of a possessed car that turns out to include – right at the end – the former owner’s ghost as well, and which (even further at the end) comes back from being junked, melted down, and reconstructed. You can’t get any more King-ish than that.