You know all those Hollywood Creature Features, of course; the ones where a ludicrous monster begins snacking off unwary tourists, or invades some tiny town out in the US Midwest. They’ve used just about every animal they can think of, including giant rabbits.
I swear that’s true. Giant rabbits. It was called Night of the Lepus. Check it up.
Anyway, I had the perfect Stupid Movie Monster dream: the skeleton of a dinosaur in a museum came to life and began stalking the town. Not the dinosaur, you understand. The skeleton of a dinosaur.
I have a clear memory of the scene; the evening sky, flat fields of grass, and, across the way, near the Museum buildings, the silhouette of the skeleton of the dinosaur, stalking across the landscape, slowly and ponderously as one of those Imperial Walkers in The Empire Strikes Back. 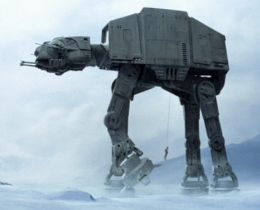 Also a dinosaur
It was on four legs too; a vegetarian sauropod by the looks and size of it. But since when did people who could make a creature feature on giant rabbits give a damn for biological accuracy? I’m willing to forgive them the sauropod. I'm generous that way.
I do have to wonder at the menace of a creature that could be dismantled by a hungry dog, though, and my dream did feature a Dobermann watching the skeleton and probably looking for a good long gnaw on those huge long bones.
The crowning part, though, the one I couldn't forgive, was that this skeleton was apparently capable of changing size; by the end of the movie/dream, the Monster was chasing the requisite beautiful, blonde, screaming girl, clad in her bra-and-panty ensemble, through an ordinary house. Like the shark in Shark Attack 3: Megalodon, it could fit its size to its prey.
If I were the Monster Hunter, I’d have given it an earthworm to eat, and stamped on it when it had shrunk to the size of a mouse. Crunch!
Now all I have to do is find someone to make this film for me.
Volunteers?
Posted by Bill the Butcher at 5:13:00 pm